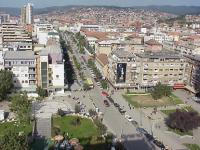 A Serb bank operating in Kosovo, Komercialna Banka, that was granted a license in 2006 by Kosovo’s Administration, is not reporting its activities to the country’s Central Bank.

But for the past two years since the bank was granted its license, Komercialna Banka has not published its balance sheets at the official web site of the Kosovo’s Central Bank.

There are several Serbian banks operating in Kosovo whose function is dependant on Serbia’s Central Bank. These banks refuse to report Kosovo’s Central Bank and Kosovo’s legal framework.