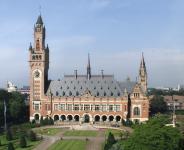 Macedonia will present evidence against neighbouring Greece to the International Court of Justice in The Hague, ICJ, on Monday.At the end of last year, the country submitted a complaint against Greece for breaching a 1995 UN-brokered Interim Accord on the “name” row.

The prolonged row escalated when Athens, a veteran NATO member, blocked Skopje’s entry into the Alliance.

Under the UN deal, Macedonia agreed that it would be provisionally referred to as the Former Yugoslav Republic of Macedonia, FYROM, and Greece swore not to block the country from entering international organisations.

Athens insists that Skopje’s formal name, the Republic of Macedonia, must be changed. It says the name indicates that Skopje is making territorial claims to its own northern region of Macedonia.

Skopje will submit a memorandum to the court that, local media say, contains statements by Greek officials and texts that will serve as evidence in the forthcoming trial.

Greece is set to present its own arguments soon. Media speculate that it will try to prove that Macedonia breached the UN deal first by nurturing an irredentist policy towards Greece.

The trial is expected to continue next year, Macedonia’s Makfax news agency reported. Local analysts say the court could take several years to reach a verdict.

The court’s decision, although binding on both parties, will not be enforceable on the sides, say legal experts cited in the local media. Pragmatically, this means that even if Macedonia wins there is no guarantee that Greece will lift its NATO veto.

Concurrent with the court proceedings, both countries are engaged in UN sponsored “name” negotiations with the aim of reaching a compromise on the issue.

Both sides are due to submit their responses to the latest ideas tabled by UN mediator Matthew Nimetz during his last visit to the region at the beginning of this month.

Media mention variations of the name “Northern Macedonia” as the rendering most likely to receive support..

Post Views: 209
Previous The South Stream Pipeline and the Environmental Factor
Next Bosnia: Tensions over Murder of Muslim Radical