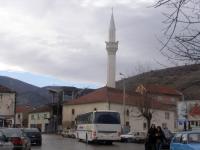 Ethnic Albanian officials in southern Serbia have launched a new initiative for the formation of a separate region in the Presevo Valley with its own institutions and organs.

The proposal was raised in the assembly of the Presevo, Medvedja and Bujanovac municipalities and envisages the creation of an ethnic Albanian-led governance structure for the area.

The president of the local Presevo assembly, Skender Destani, told Balkan Insight that the assembly of Presevo, Medvedja and Bujanovac municipalities passed the demand to the Serbian government and parliament and is awaiting an answer.

“I don’t think the initiative will be accepted in Belgrade, but it’s worth trying. We want to convince the other side [Serbian government] that the solution, which we opt for, is in both our interests,” Destani added.

Riza Halimi, leader of the ethnic Albanian Party of Democratic Action, told Balkan Insight that the proposal confirms a 2006 declaration, which envisaged giving ethnic Albanians in the region the right to self-determination. He has described this weekend’s initiative as the only solution for local Albanians to keep their national, cultural and religious identity.

“The newest document is a response to the irresponsible approach the Serbian government has taken to the demands and problems of the Albanians in the south,” Halimi said.

The declaration criticises the recent actions of Serbian special police, alleging these are a continuation of ongoing efforts to collectively criminalise Albanians.

Additionally, the declaration insists that Kosovo university degrees, signed by the Republic of Kosovo, be recognised, where these were issued after Kosovo declared independence on February 17, 2008.

According to the agency, the assembly also called for either the freeing of members of the Liberation Army of Presevo, Medvedja and Bujanovac or their processing by an international legal mechanism, given that those arrested in December 2008 are accused of war crimes.

In their declaration, the officials expressed support for speeding the existing process whereby ethnic Albanians are reintegrated politically into Serbia’s state institutions.

The proposal was adopted immediately after talks between local Albanian representatives and Serbian Interior Minister Ivica Dacic, which focused on the means for maintaining political harmony and safety and stability in the region.

“Talks have passed well and correctly and they will be continued. I want local citizens to have understanding and support for Serbian security forces in the south. Also, I want to bring our forces together against crime and corruption since it’s in everyone’s interest,” Dacic said.

The Law on Regional Development, which the Serbian parliament is expected to adopt by year’s end, will divide Serbia into seven regions. According to the draft, the three southern municipalities (Presevo, Medvedja and Bujanovac), will combine to form the new “Southern” region.

The declaration comes after two violent incidents in the area in early July: two people were injured in a bomb explosion in the town of Presevo and two members of the Serbian police were wounded in a grenade attack in the village of Lucani near Bujanovac.

Considering these terrorist attacks, the Interior Ministry has launched a security operation targeting those suspected of involvement.