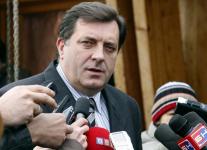 The Bosnian Serb political scene was shaken up over the weekend by the news that prominent former politician Dragan Kalinic may return to public life, after being given permission to do so by Bosnia’s High Representative Valentin Inzko.

Kalinic may provide the biggest challenge yet to undisputed Bosnian Serb leader Milorad Dodik. As such, his eventual return has already triggered speculation and conspiracy theories regarding purported international plots against the current leadership of the Serb-dominated Bosnian entity of Republika Srpska.

On Friday evening Inzko announced that Kalinic and three other Bosnian Serb officials had been pardoned and would be allowed to take up public posts again.

The decision is part of a review process of decisions made by previous High Representatives, who have removed scores of local officials from their positions in Bosnian institutions and the political scene over the last 11 years, due to their obstruction of the peace process.

Should Kalinic choose to return to politics, the local media speculates that this could have a serious impact on the current political scene in Republika Srpska.

Kalinic was the health minister in the government of Radovan Karadzic and was one of the few war-time Bosnian Serb leaders not sought for war crimes by the International War Crimes Tribunal for the former Yugoslavia. Consequently, he became one of the top Bosnian Serb officials in the post-war period.

Kalinic was serving as speaker of the Republika Srpska Assembly and was the president of Karadzic’s Serbian Democratic Party, SDS, in June 2004 when he and 58 other Bosnian Serb officials were removed from office and banned from politics due to their alleged obstructions of decisions made by then-high representative Paddy Ashdown.

The review of earlier dismissals is an element of preparations for the eventual closure of the Office of the High Representative, OHR. Before Friday, 52 people had been allowed to resume their public roles since the reviews began in 2005.

“Upon careful consideration of Mr. Kalinic’s case, and after concluding that the reasons for his removal no longer apply and that he no longer poses a threat to peace implementation, institutional integrity or democracy in Bosnia and Herzegovina, I have decided to repeal the ban,” Inzko was quoted as saying in the OHR press statement announcing the decision.
“This Decision does not constitute an amnesty but rather a repeal, prospectively, of the 2004 Decision […] Mr. Dragan Kalinic is hereby expressly permitted to hold official, elective or appointive public office, to run in elections and to hold office within political parties,” the statement read.

Although Kalinic now holds no position of power in the SDS and has not said whether he will return to politics, the possibility of his return has immediately plunged the Republika Srpska political scene into turmoil.

Daily Oslobodjenje speculated that if Kalinic returned to politics he would not find it hard to unseat current SDS president Mladen Bosic, who has failed to impress after taking up the position after the 2006 elections.

The west welcomed Dodik and his Alliance of Independent Social Democrats, SNSD, party when they first removed the SDS from power in the 2006 elections, but Dodik and his party soon proved to be far more radical than the SDS.

“He is the only politician who was able to handle Milorad Dodik and who represents serious competition,” Oslobodjenje reports.

Dodik has failed to comment on the matter, but statements from party associates seemed to reflect similar sentiments.

Upon hearing Inzko’s decision, SNSD Executive Secretary Rajko Vasic said the move was aimed at spreading confusion on the Bosnian Serb political scene and at boosting Bosnian Serb opposition parties, and is part of a plot to overthrow Dodik.

Vasic said that these efforts will fail and that neither Kalinic, nor any other reinstated “old school” SDS leader can have any serious impact on Republika Srpska politics.