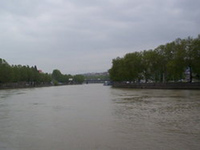 The level of pollution of the Azerbaijani Transboundary Rivers by Georgia and Armenia exceeds the norm.

Amount of nutrients in the waters of the Kur exceeds the norm numerously due flow of domestic and industrial wastes from Georgia and Armenia to water facilities without preliminary treatment. Composition of specific contaminants of phenol and copper compounds exceeded the allowed density norm in water.

According to the monitoring, the water waste in the Araz River transbordering with Armenia was 44.2 cubic meters per minute and content of copper in the water exceeded the allowed density by 4 times and phenols by 3 times in Horadiz section of the Araz River, the Shahsevan I and in Bahramtapa.

Azerbaijan ratified the Helsinki Convention on protection and use of water drainage and international lakes, passing the border to solve the problem of transboundary water basins at the regional level in accordance with international standards. The problem exacerbates the fact that Armenia and Georgia have not joined this convention.