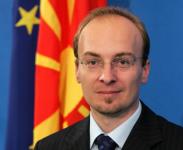 Milososki was answering a journalist’s question on whether a statement made by President Gjorge Ivanov in Berlin, two days earlier, that Macedonia remains committed to a dual name formula, is a setback for the UN-sponsored negotiations.

Under the dual name formula Macedonia would only use an alternative appelation, agreed with Greece, in bilateral relations with Athens. This proposal has been rejected by Greece, which is insisting on a single, compound name with a geographic qualifier for full international use.

“Macedonia’s position regarding the name talks with Greece and [UN] mediator Matthew Nimetz is such that it enables us to present our stance, thus preventing a standstill in the process and enabling the UN envoy to be productive and make a step forward,” Milososki said.

He revealed that the Macedonian delegation at the UN General Assembly in New York would hold a parlay with Nimetz during the course of the UN meeting.

Milososki blamed Greece for the protracted dispute: “It seems that certain Greek politicians want to have a say in deciding on the freedoms and self-determination of another people”, he said.

Asked if Greece could obstruct the implementation of proposals contained in what is expected to be a positive European Commission, EC, report on Macedonia’s reform progress next month, Milososki replied that the impression gained from EU chiefs is good.

“Macedonia wants only one thing: the established criteria to be applied in relations with the EU,” he stated.

Local media speculate that Athens could use its influence to prevent the EC from including an exact date for Macedonia’s accession talks in the upcoming report. Thus, Greece would avoid the uncomfortable position of being pressured into a second veto.

Macedonia was granted the status of an EU candidate country in 2005. However, the EC has refrained from recommending the start of EU accession talks in subsequent, recurrent reports, citing a lack of reform progress.