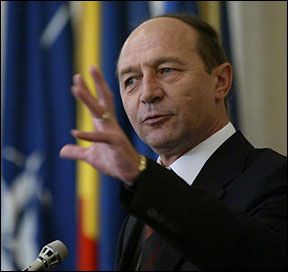 Traian Basescu has been officially declared the winner in Romania’s presidential election. Earlier exit polls had put his social democrat rival in the lead. But the final results show the centre-right leader has been re-elected to power with 50.37% of the vote in Sunday’s run-off.
Basescu fought a campaign promising to fight corruption. He spoke to jubilant supporters: “Victory in this election is thanks to the Romanian people. Five million Romanians showed they made a clear choice towards modernising Romania.” The knife-edge vote also saw Basescu’s rival claim victory on Sunday night. His left-wing challenger, former foreign minister Mircea Geoana, held a triumphant rally in Bucharest after he seemed to be in the lead.

The final result put him narrowly behind on 49.65%. The election has been one of the most important since the end of communism. The winner’s first task will be to form a government to try to unblock an IMF rescue deal for the crisis-hit economy, suspended because of the political uncertainty.