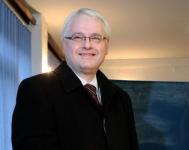 Big margin of victory in first round over nearest rival, Milan Bandic, puts Social Democrat nominee in pole position to claim the prize on January 10.

Ivo Josipovic, 52, won the first round of Croatian presidential elections last weekend by a wife margin and, along with his nearest rival, Milan Bandic, 55, will go through to the second round on January 10.

On that day Croatia’s third head of state since gaining independence in 1991 will be elected. Josipovic defeated his former Social Democrat colleague convincingly, taking 32.42 per cent of the vote to Bandic’s 14.83 per cent.

Until the beginning of the race, both men were members of the Social Democratic Party, SDP. However, when the party convention named Josipovic as its candidate, Bandic, now mayor of Zagreb, decided to stand as an independent and was thus expelled from the party.

The biggest loser among the 12 candidates in the race was Andrija Hebrang, candidate of the ruling centre-right Croatian Democratic Union, HDZ. His 12.04 per cent share of the vote was not enough to get him a place in the second round.

He made no effort to hide his disappointment about coming in third, and, as soon as the results were released on election night, lashed out at his two former party colleagues, Nadan Vidosevic and Dragan Primorac, who also competed in the race.

Hebrang said they were to blame for his failure to make it onto the second round, because they split the rightwing vote three ways. Vidosevic won 11.33 per cent and Primorac 5.93 per cent. Both ran in the election in spite of the fact that the HDZ had nominated Hebrang. Both were expelled from the party, but this was of no help to Hebrang.

The votes he would probably have won, had Vidosevic and Primorac not also run for president, would have secured his passage through to the second round.

Josipovic, meanwhile, can draw satisfaction from a very convincing lead that puts him in a good position to win.

All the polls conducted prior to the elections have predicted his victory. Political analysts believe the larger the turnout, the more convincing this victory will be. The first round saw a low turnout of only 44 per cent, however, which is almost 10 per cent down on the turnout in the last presidential election in 2005.

Davor Butkovic, political commentator with the daily Jutarnji List, says that “a huge surprise, bordering on a miracle” would be needed for Josipovic to lose the second round.

The main reason is Josipovic’s tally of votes, twice as high as those of his nearest rival. This gives him a major psychological advantage that is likely to significantly affect the voters, especially those who abstained first time round. As a rule, voters in the second round tend to favour the first-round winner. Such has been the case in previous Croatian presidential elections.

Milorad Pupovac, the deputy leader of the Independent Democratic Serbian Party, SDSS, a party representing the Serb community, also believes the odds are on Josipovic winning.

“The fragmentation of the [votes on the] right is so great that it practically cannot be ‘patched up’, which guarantees Josipovic victory in the second round,” he said. Pupovac said it would be hard for all the voters who supported a variety of right-wing candidates to unite behind Bandic.

Another important advantage for Josipovic will be the support he has obtained from the outgoing president, Stjepan Mesic. His foreign policy advisor, Yugoslavia’s last foreign minister, Budimir Loncar, visited Josipovic’s headquarters on election night, sending a clear message about who Mesic favours. Although Mesic issued no public statements in support of Josipovic, a day after the elections, speaking on a radio show he spoke critically of Bandic.

Judging by Bandic’s and Josipovic’s first public statements, the second round could turn out to be fierce. The banner headline of both of Croatia’s leading dailies, Jutarnji List and Vecernji List, was the same phrase: War is Starting.

A few minutes after the release of the first round results, Bandic said Croatia needed a president who would not be under the thumb of the SDP chief, Zoran Milanovc. Josipovic, meanwhile, issued an appeal for voters to choose light over darkness – Bandic presumably representing the latter.

Josipovic is a relatively new figure in Croatian politics. A legal expert and university professor with a diploma in musical composition from the Academy of Music, he is untainted by association with criminal figures or corruption scandals.

Bandic, on the other hand, is a populist who has been accused by the media of having links to various criminal groups and of misusing public money. With those images in mind, the Slovene daily Zurnal 24 likened the second round of the presidential race in Croatia to a battle between a respectable gentleman and Al Capone.

The run-off will reveal which of these two apparent options is more popular.

Post Views: 201
Previous “Accession to Russia is desirable for Transnistria, but is hardly probable” – Grigory Marakuta
Next IMF is ready to help Greece: Marek Belka