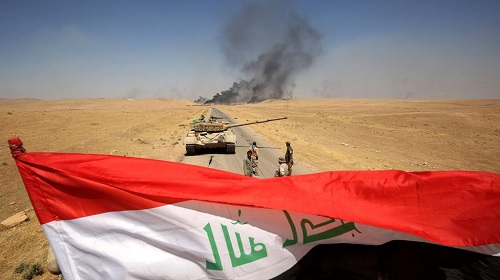 Iraqi prime minister Haider Al Abadi has congratulated the military for an “overwhelming victory” against ISIL in Tal Afar, as an officer likened continuing fighting in a nearby town to opening “the gates of hell”.
Mr Al Abadi is expected to announce the full liberation of Tal Afar from ISIL within days. The military says it has retaken the city but is waiting for fighting to end in the town of Al Ayadiya, approximately 15 kilometres north of Tal Afar, before declaring complete victory in the offensive.
“We congratulate our heroes and the Iraqi nation for the overwhelming victory in Tal Afar,” Mr Al Abadi said during a news conference in Baghdad on Tuesday evening.
He praised “the army along with counter terrorism forces, federal police and Hashed Al Shaabi (the Shiite-dominated Popular Mobilisation Forces)” and said they “have all participated in Tal Afar’s victory”.
Eight days after the offensive to retake Tal Afar began, the military said on Sunday that all 29 neighbourhoods in the northern city had been taken back from ISIL.
But heavy fighting continued on Wednesday between government forces and ISIL fighters in Al Ayadiya, situated on the road to the Syrian border.
An Iraqi military spokesman said on Tuesday evening that ISIL fighters were putting up tough resistance in Al Ayadiya.
“The military launched a series of heavy airstrikes and artillery since early morning Tuesday on the militants’ positions in Al Ayadiya district,” added Brigade General Yahya Rasool.
Iraqi officer Colonel Kareem Al Lami described the fighting in Al Ayadiya as “multiple times worse” than the notoriously difficult battle for Mosul’s Old City, and said breaching ISIL’s first line of defence in the town was like opening “the gates of hell”.
Hundreds of ISIL fighters are positioned inside most of the houses and high buildings in the town, making it difficult for Iraqi forces to make any progress.
In response, the military have stepped up air strikes, as well as bringing in reinforcements from the federal police to boost units from the army, air force, federal police, US-trained counter terrorism service (CTS) and Hashed Al Shaabi.
The Norwegian Refugee Council reported on Wednesday that more than 3 million people are currently displaced by conflict across Iraq — a third as a result of the fighting in Tal Afar and Mosul during the last nine months.
Although the military operation in Tal Afar was brief, residents began fleeing several months before, with over 40,000 displaced since April.