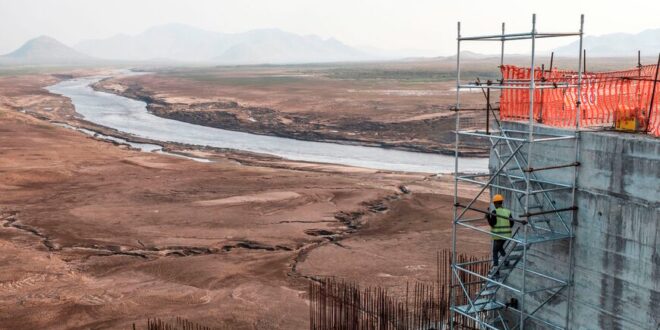 The foreign ministers of the Arab League called on the UN Security Council to urgently convene and discuss the dispute over Ethiopia’s controversial dam on the Nile River.

A few days before Ethiopia starts the second-round filling of the Grand Ethiopian Renaissance Dam, scheduled for July 1, Egypt has once again appealed to the UN Security Council. Egypt’s plea has wide Arab support after various initiatives and mediation efforts have failed to resolve the dispute.

Speaking at a press conference on the sidelines of an Arab League meeting in Doha June 15, Secretary-General Ahmed Aboul Gheit said, “The Arab ministerial council called on the UN Security Council to convene an urgent meeting to discuss the necessary actions to be taken in response to the Ethiopian government’s measures that affect Egypt’s and Sudan’s water security and rights.”

He added, “Several decisions were issued at the ministerial meeting. They all affirm a strong Arab support to Egypt and Sudan and stress that their water security is integral to Arab national security.”

On June 11, Egyptian Foreign Minister Sameh Shoukry addressed a letter to the UN Security Council president expressing Egypt’s objection to Ethiopia’s plan to fill the GERD reservoir during the flood season, its efforts to impose a fait accompli on the two downstream countries and its unilateral moves that violate international law. According to a statement by the Foreign Ministry spokesman, the letter claimed that Ethiopia’s positions over the past months have undermined all efforts to bring about a fair, balanced and binding solution to the dispute.

Other countries also denounced before the UN the Ethiopian government’s policies in the Tigray region as violations of human rights and international law, the ongoing border crisis between Ethiopia and Sudan and the dispute between the two countries over the area of al-Fashqa.

In a June 15 statement, Ethiopia’s Ministry of Foreign Affairs complained that such actions are not helpful and will only cause ill feelings between the three countries. It added that the efforts to “internationalize and politicize the GERD dossier will not ensure a sustainable regional cooperation in the Nile River management,” adding, “It is an existential matter for Ethiopia to exploit the Nile waters, and the Nile does not belong to Egypt and Sudan exclusively.”

Sudan also intends to submit to the UN Security Council a letter asking it to examine Ethiopia’s practices regarding the second filling of the GERD reservoir on July 1. Sudan’s Minister of Irrigation and Water Resources Yasser Abbas said in a June 14 press conference, “The information available to Khartoum shows that Ethiopia will carry on with the second filling, which would pose a threat to Sudan’s water security.”

Abbas added that Sudan is not against reaching a partial agreement on the second filling with Ethiopia. He said, “We are open to the signing of a temporary and partial agreement on the second filling, but the agreement has to involve certain conditions, most notably signing off on everything that has already been agreed on in negotiations. … But Addis Ababa continues to impose insuperable conditions to avoid reaching an agreement.”

An Egyptian official told Al-Monitor on condition of anonymity that Egypt and Sudan “will continue to coordinate on all technical and diplomatic levels against Ethiopia’s unilateral position.”

Commenting on Sudan’s consent to a partial agreement on the dam’s filling, the source said, “Until last week, international and regional mediators suggested initiatives and solutions — which Khartoum and Cairo agreed on — based on mechanisms that would ensure reaching a comprehensive agreement on the GERD filling and management. Yet Ethiopia rejected such proposals, which Egypt articulated in its letter to the UN Security Council.”

Egypt’s Al-Azhar has also demanded that the international, African, Muslim and Arab communities take responsibility by supporting the Egyptian and Sudanese position against “claims of ownership of the [Nile] river and arbitrary actions that would harm the two peoples,” Al-Azhar Grand Imam Sheikh Ahmed al-Tayeb stated on June 15.

He went on, “All faiths agree that resources such as rivers are public property and that no single country shall monopolize these resources.” Tayeb warned, “It is prohibited under Sharia to disregard the rights of others. If that happens, there would be dire consequences for world peace.”

Salah Halima, deputy chairman of the Egyptian Council for African Affairs, told Al-Monitor that Egypt’s appeal to the UN via the Arab League is “different from the previous one when Egypt submitted its first complaint to the Security Council last year. This time, approaching the Security Council attests that the damage that Ethiopia is causing to Egypt and Sudan amounts to a threat to regional peace and security, particularly in the Red Sea and East Africa.”

He said, “Egypt turned to the Security Council under Chapter VII and Article 51 [of the UN charter], which grant states the right to defend themselves when their interests are in peril. Taking unilateral actions and imposing a fait accompli by cutting the flow of water amounts to clear aggression against Egypt and Sudan and a sort of declaration of war.”

Halima said of accusations that the Arab League’s move indicates an Arab bloc against Africa, “These claims are mere attempts to cause ill feelings between Arabs and Africans. There are 11 African member states of the Arab League. … Also, there is wide-scale economic rapprochement between Arab countries and Ethiopia, especially some Gulf countries, which invest billions of dollars in the development of Ethiopia.”

He added, “It would have been better to warn Ethiopia that it is risking the Arab investments with its intransigence, and that it is better to pursue cooperative policies in the management of the Nile River.”

As July 1 approaches, hopeful eyes are watching the international community for efforts to avoid a clash between the three countries. Meanwhile, unofficial reports are circulating that technical problems and flaws in the GERD’s construction will prevent Ethiopia from storing the planned 13.5 billion cubic meters of water in the dam’s reservoir.