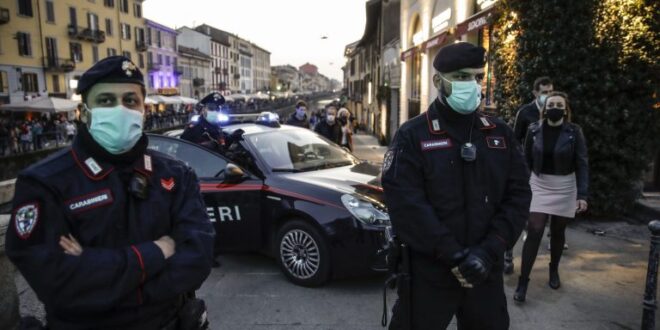 Italian police recently announced that they had disrupted a terrorist plot by an Italian far-right violent extremist group planning to bomb a NATO base.

Italian authorities, like their counterparts throughout Europe, are increasingly concerned about far-right violent extremism and terrorism.

Separately, Germany recalled soldiers from a NATO mission in Lithuania after an investigation uncovered racist and anti-Semitic behavior, and sexual violence.

NATO finds itself in the crosshairs of neo-Nazis because it represents “globalism,” a frequent target of far-right extremist propaganda.

In early June, Italian carabinieri police announced that they had broken up a major terrorist plot by an Italian far-right violent extremist group known as the Roman Aryan Order, which is inspired by neo-Nazi and white supremacist beliefs. The plot, which also had connections to far-right adherents in Portugal, involved bombing an unnamed NATO base using homemade explosives. The extremists organized online and connected via Facebook and VK, a Russian social network. In their various communications, the group members posted Nazi-inspired propaganda, including anti-Semitic conspiracy theories and Holocaust denial related messages. In addition to planning to attack the NATO base, members of the cell frequently incited one another to perpetrate acts of violence against Jewish people and immigrants. Matteo Perego, an MP for the center-right Forza Italia Party, highlighted the need for a parliamentary inquiry into the threat of terrorism and extremism posed by “the new orbit of the extreme right.”

Italy’s Interior Minister Luciana Lamorgese lamented the growth of online radicalization in Italy and said that far-right violent extremists were exploiting young people online, introducing them to extreme ideologies and encouraging them to engage in acts of violence. The individuals arrested as part of the plot will be charged with criminal association aimed at spreading propaganda and incitement with ethnic and racial discrimination. Italian authorities, like their counterparts throughout Europe, are growing increasingly concerned about the proliferation of far-right violent extremism and terrorism throughout the country. In February 2018, a far-right violent extremist named Luca Traini went on a shooting rampage in the central Italian city of Macerata, motivated by a hatred for immigrants. Traini has since been lionized by elements of the far-right in Italy. During the COVID-19 crisis, two Italian far-right parties—the League and Brothers of Italy—championed illegal immigration as the most serious threat to Italy. Anti-immigration and anti-globalism are causes that link Italy’s far-right to like-minded groups elsewhere in Europe.

In a separate incident, Germany recalled soldiers from a NATO mission in Lithuania after an investigation uncovered racist and anti-Semitic behavior. German Defense Minister Annegret Kramp-Karrenbauer said that misconduct would be “punished with all severity.” Germany’s elite KSK commando force has been plagued by rampant allegations of far-right extremism in the ranks—including a 2020 incident where a unit was disbanded after it was found to have been infiltrated by far-right extremists —while German police forces have been implicated in participation in far-right extremist chat groups. These issues have raised concern among high-ranking military officials about the threat of an insider attack. As more extremists are identified in Western militaries and law enforcement agencies, there has been a wholesale reassessment of vetting standards, policies, and procedures related to proper conduct and social media usage. In the U.S., Private Ethan Melzer of the U.S. Army was charged with terrorism offenses in 2020 for planning an ambush on his own unit after he allegedly shared sensitive details related to the unit’s deployment schedule with individuals linked to a neo-Nazi group known as the Order of the Nine Angles (O9A). Melzer was assigned to a U.S. military facility in Europe in the fall of 2019 while on active duty.

NATO has found itself in the crosshairs of far-right extremists because, as it is comprised of troops from thirty countries across Europe and North America, it is symbolic of “globalism,” a frequent target of neo-Nazis and white supremacists who are paranoid about what they label a “New World Order.” One of the most significant challenges to countering the threat is the difference with which NATO members treat the issue of violent far-right extremism. There is a split that exists between countries that view counterterrorism holistically, and others that remain narrowly focused on Salafi-jihadist organizations and individuals inspired by jihadist ideology, unwilling to consider far-right violent extremists as a serious terrorist threat. Moreover, it may also be politically challenging for European countries to turn the focus of counterterrorism efforts inward to a more localized or regional threat, one that may implicate many of their own voters. And while jihadists remain a major concern—an Islamic State cell of Tajiks living in Germany was arrested for plotting an attack on U.S. and NATO military bases in Germany last year—the threat landscape has evolved. In some countries, far-right violent extremism is now on par with, and in some cases has eclipsed, the threat posed by jihadist groups and other homegrown violent extremists, and has the potential to expand further using transnational connections.