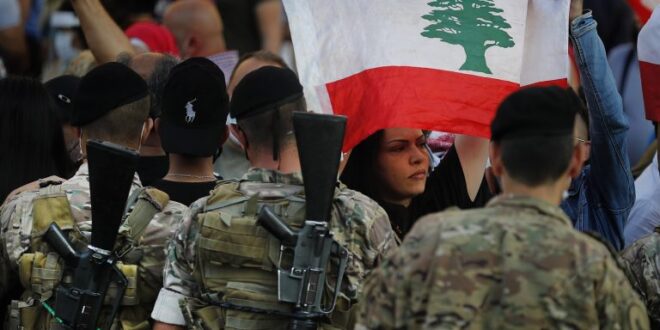 The Lebanese Armed Forces (LAF) is in dire need of emergency assistance to help sustain it and prevent an outright collapse.

The average monthly salary for a soldier is just $80, leading some soldiers to abandon their jobs amidst deteriorating morale within the army.

In a deeply divided country, the LAF is often viewed as a stabilizing force and one essential to counterbalancing Hezbollah.

The Lebanese Armed Forces (LAF) is in dire need of emergency assistance to help sustain it, with some analysts warning of a collapse as the country continues to struggle with a spiraling political and economic crisis. Requested necessities include food, medicine, fuel, and spare parts for vehicles used by the military. France has taken an active role in organizing external assistance from a number of countries, including the United States, Russia, China, several European countries and, others in the Persian Gulf. A recent conference, organized in coordination with the United Nations Special Coordinator for Lebanon, sought to help relieve financial pressures related to Lebanon’s national defense budget. A statement from France’s Defense Ministry noted the importance of “increased commitment and coordination” from the international community to prevent catastrophe. The United States has pledged $120 million in military grant assistance for the army, an increase of $15 million over prior-year levels, with funds already earmarked for acquisition and maintenance of vehicles and equipment.

Economically, Lebanon is mired in a prolonged depression, one of the deepest recorded in modern times. In 2020, gross domestic product (GDP) fell by over twenty percent, which followed a contraction of nearly seven percent the year before. This year, 2021, expectations remain dire, with GDP expected to shrink between an additional nine and ten percent. The Lebanese pound has lost nearly ninety percent of its value against the U.S. dollar. Inflation has skyrocketed and more than half of Lebanon’s seven million people are currently living below the poverty line as purchasing power and wages have plummeted. For context, Lebanon’s minimum monthly wage was once $450; it has since dropped to $72. Before the crisis, the average monthly salary for a soldier was about $800, but has since dropped to just $80, leading some soldiers to abandon the military, while others have been forced to take additional jobs to support their families. Poor governance, endemic corruption, and a lack of foreign reserves are worrisome indicators in a country that has been described as “on the brink” for the past year. The explosion at Beirut port in August 2020 – which some dubbed “Beirutshima” – and its catastrophic toll on civilians in neighboring communities, has stood out as a symbol of government neglect and popular frustrations; despite the international attention on the government response prompted by a visit from French President Macron, there has been little government effort to address the fallout.

In a divided country, the LAF is often viewed as a stabilizing force and one that is essential to ward off widespread unrest. The LAF maintains responsibility for internal security, counterterrorism, and border security, critical missions to preventing instability throughout the country. Viewed as a legitimately neutral entity by numerous parties in Lebanon, the LAF serves as a counterweight to Hezbollah, the Shia militia and political party, which maintains a ubiquitous presence throughout the country and is sponsored by Iran. When the army is unable to provide security, it creates opportunities for Hezbollah, a group designated as a terrorist organization by the United States and other countries, to fill the void. Fulfilling this role helps Hezbollah garner political legitimacy, resources, and popular support. Capacity gaps attenuate the image of the central government and contribute to a further weakening of the rule of law. Recent videos from Lebanon showed armed clashes at fuel stations as shortages prevail. A Lebanon in free-fall will inevitably impact other countries in the region, with instability spreading beyond its borders. Other countries in the region with similar economic indicators are watching Lebanon’s economic situation with increasing concern.

The LAF is just one of several critical state institutions that are imperiled by the government’s inability to pay the salaries of soldiers and other civil servants. Lebanese Army Chief General Joseph Aoun has been outspoken about the LAF’s precarious situation, noting that his soldiers were “hungry like the rest of the people” in Lebanon. Attrition rates in the LAF have grown significantly over the past three years. The loss of highly qualified officers and experienced noncommissioned officers (NCOs) can have a substantial negative impact on training and readiness. Since the deadly explosion at Beirut Port, and the subsequent resignation of caretaker Prime Minister Hassan Diab, Lebanon has been unable to form a new cabinet. Political dysfunction, coupled with lingering economic malaise, the impact of COVID-19 restrictions, and a protest movement, have all combined to make daily life unpredictable.

Post Views: 267
Previous Far-Right Violent Extremists in Europe Pose a Growing Threat to NATO
Next As France Draws Down in the Sahel, How Will it Impact Regional Stability?