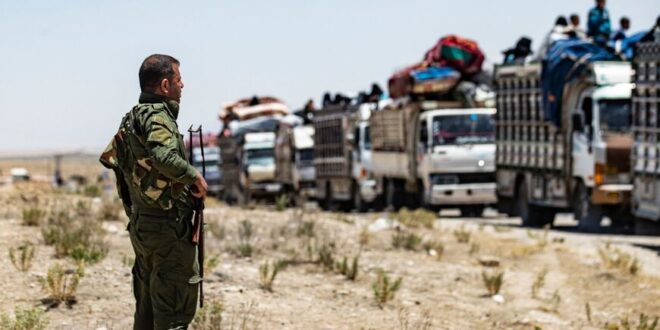 Baghdad’s program to allow families of Islamic State adherents to return from a Syrian camp and to reintegrate them back into Iraqi society stirs controversy.

The Iraqi government decided June 6 to accept the return of 100 Islamic State (IS) families. The returnees are transferred to Al-Jada camp in Mosul from the al-Hol camp in northern Syria, which is home to about 30,000 Iraqi refugees.

These returnees are mostly children and adolescents who are not recognized by any state as they have no official civil status documents, which prevents them from entering schools and practicing their normal lives. Many also are mothers. Meanwhile, many Iraqi residents refuse to welcome back IS families. This has caused mutual retaliation and prevented the settlement of these families directly in their areas of origin.

The return of these families to Iraq also faced rejection at the official level. A Yazidi member of the Iraqi parliament, Vian Dakhil, called on the Iraqi government May 28 to “prevent the passage of IS convoys through Sinjar out of respect for the Yazidi victims.”

But the undersecretary of the Iraqi Ministry of Immigration and Displacement, Karim al-Nuri, told Al-Monitor, “The return of IS families was well planned. It involves a rehabilitation program based on educational academic curriculum, especially for young people. The program aims to entrench in the returnees the values ​​of tolerance, mercy, peaceful coexistence with others, and acceptance of differences in opinions and beliefs.”

Nuri said the Ministry of Immigration, through the rehabilitation program, which is to extend over a period of months, aims to emphasize that the state applies humanitarian standards in dealing with refugees. He noted, however, that the judiciary will handle the cases of returnees involved in terrorism.

“During field visits to the camps I noticed that the new generation of IS members are very prone to violence and use of weapons as the only way to live,” he told Al-Monitor. “This is very dangerous. These children who are being brought up in a culture of violence must be rehabilitated. Otherwise, we would be facing a new generation of extremists. The solution is social, cultural and religious rehabilitation. We must not surrender to the status quo and let IS families be easy prey for terrorist organizations to recruit them again.” “

Concurring with Nuri, a consultant at the European Centre for Counterterrorism and Intelligence Studies, Imad Alo, said June 1, “Children and women in al-Hol camp lived in an environment saturated with the ideas of the terrorist organization. They are ticking bombs unless they are rehabilitated.”

Speaking about the relationship between residents and individuals affiliated with IS, Samarra Mayor Mahmoud Khalaf al-Samarrai told Al-Monitor, “Some of the city’s residents were recruited into IS ranks but their families quickly avoided the negative repercussions of their acts by disavowing their own children. They even filed official letters in this respect that I personally authenticated. This spared the city any possible return of those who joined IS.”

Samarrai warned, “Any return of IS families to normal life, without rehabilitation, will pose a danger to society.”

Ahmed Abbas al-Dhahabi, a professor of psychology at the University of Baghdad, said IS families, especially young men and boys, have been brainwashed to carry out terrorist operations. They were brought up to breed hatred toward the other, which requires a counter-brainwashing process.”

Dhahabi said psychological studies show IS families suffer mental illnesses, such as anxiety, depression, obsessions and despair, which makes them a tool in the hands of terrorists.

He said, “The rehabilitation program should include psychiatric clinics under the supervision of doctors in psychology and sociology so that the patient gains a full recovery and is rescued from an environment saturated with terrorist and extremist ideas.”

Legal expert Tariq Harb told Al-Monitor, “The returning families, regardless of their classification, are still Iraqi families, and most of their members are children and women. They have constitutional rights, including the right to housing, and they cannot be held legally accountable for the actions of their spouse, father, brother or grandfather.”

Harb noted that the return of families is permitted by Iraqi law. “It is the duty of the Iraqi Ministry of Immigration, under the constitution, to accommodate the returnees and provide them with a decent livelihood, especially since they accepted to return to their homeland.”

Member of parliament Alia Nassif stressed the need to keep these families in places of detention until they complete their rehabilitation. She told Al-Monitor that in previous experiences, some returnees were released in exchange for bribes.

While underlining the necessity for there to be scrutiny of the returnees for security reasons, she also said, “Tolerance could be an opportunity to make these people feel that their homeland is the sole refuge, and that they can overcome neglect and marginalization, by responding to intellectual, religious and social rehabilitation sessions.”

The secretary-general of the Civil Youth Movement, Ahmed Ayyash al-Samarrai of Salahuddin, told Al-Monitor that many young people from the province joined and fled with IS.

He also said, “IS families are Iraqis. They are not welcome in any country. Disregarding them will make them once again a victim of extremism.”