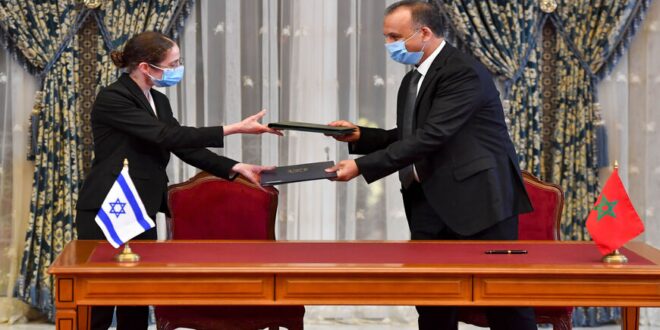 Diplomatic relations are not advancing as rapidly as those with the Emirates and Bahrain, but Israel sees positive trends in ties with Morocco.

Israeli President Reuven Rivlin was in the United States this week, for a farewell visit ahead of the end of his term July 9. As part of his visit program, 21 ambassadors participated in a ceremony at the United Nations’ New York headquarters, honoring Israel’s outgoing president. One of the ambassadors invited was Moroccan envoy to the UN Omar Hilale, who surprised the other participants. Not only did he come to the event, but he also chose to address the gathering, referring publicly to the normalization agreements signed between Israel and Arab countries, including Morocco. Hilale noted he considered this development as historic, hailing Israel’s willingness to reach these agreements and expressing his optimism for the future of the region. He said there was no alternative to peace.

The public address of Hilale marks another step in the construction of bilateral ties between Israel and Morocco. Contrary to the rapidly developing relations between Israel and the United Arab Emirates and with Bahrain, ties with Morocco are taking their time, even regressing at points.

For instance, on May 16, Morocco’s Prime Minister Saad-Eddine El Othmani appeared on Al Jazeera, stating that the kingdom “categorically rejects all violations affecting the legal status of the Al-Aqsa Mosque and Al-Quds Al-Shari,” and noting that “Morocco places the Palestinian issue and that of Al-Quds Al-Sharif at the top of its list of concerns and considers it to be just as important as its national cause.” On May 24, Othmani sent a letter to Hamas leader Ismail Haniyeh, extending his “warmest congratulations” on “the victory achieved by the Palestinian people and the supreme resistance after the cease-fire agreement between the factions of the resistance and the Zionist entity.”

Jerusalem did not react directly to the statements of Othmani. A diplomatic source at the Foreign Ministry told Al-Monitor on condition of anonymity that no one in Jerusalem expects strong ties with Rabat to emerge overnight, as is the case with Abu Dhabi. “This will take longer, and in a different path. With the Emirates, we see an avalanche of economic projects and initiatives, as well as interesting ideas for cooperation between civil societies. This will probably not be the case with Morocco. Especially not vis-a-vis the Moroccan civil society, which is very much attached to the Palestinian cause.”

Evidently, Israelis of Moroccan origin and also the Moroccan envoy to Israel Abdel Rahim-Biod are not deterred by the slow pace of Rabat in developing its ties with Jerusalem. Shortly after the establishment of diplomatic ties last year, head of the International Federation of Moroccan Jews Sam Ben-Shitrit initiated the foundation of the Committee for Israel-Morocco Friendship, with the goal of promoting cooperation between the two peoples. And on June 8, the committee held its first official meeting. Rahim-Biod participated at the festive event, alongside Israel’s national security adviser Meir Ben-Shabbat and other Israeli public figures.

It is worth noting that the Liaison Office of the Kingdom of Morocco in Israel keeps a very active Twitter account, named Morocco in Israel. Searching the account, it is evident that Rahim-Biod is working tirelessly to reach different sectors within Israeli society, culture and economy. In June, for instance, he met with Bet Shemesh Mayor Aliza Bloch and the local Moroccan community, he visited the northern town of Afula, he visited Beersheba Ben Gurion University in the south and he met with Tel Aviv Mayor Ron Huldai. The local press in Afula hailed the visit of Rahim-Biod in their city as historic, proudly noting this was one of his first visits to an Israeli town. It also noted that the Moroccan envoy conveyed to the Moroccan community of Afula warm regards from the king.

In parallel, things also advance on the economic level. Reports in recent years claimed Morocco had brought Israeli military communication equipment and even drones via third parties, such as French companies. Israeli companies are now hoping for deals like that to take place directly, without the involvement of third parties. An important tool in facilitating such deals is the June 18 decision by the Israeli public foreign trade risk insurance company Ashra. The company announced that it had allocated $200 million for insuring exporters to Morocco and $100 million for insuring exporters to Bahrain. The coverage should concern long-term financial and trade agreements and projects of up to 15 years.

Already in February, the Israel Export Institute held a special webinar on conducting businesses with the kingdom. Organizers noted at the time that many Israeli companies were interested and keen to learn more on how best to conduct business there on their own, without European mediators, directly with Moroccan partners.