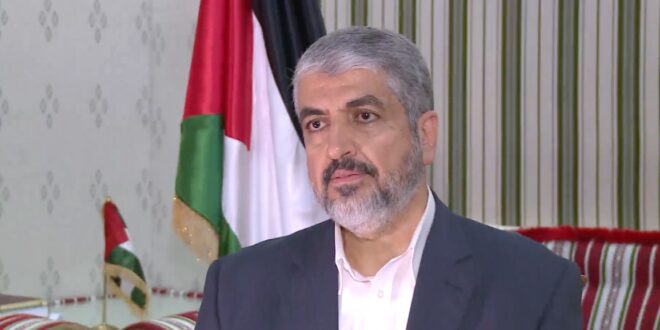 Hamas political bureau chief Khaled Meshaal on Monday called on Saudi Arabia to release its Palestinian prisoners, as he stressed his group’s readiness to “build the best ties” with Riyadh.

Speaking to Saudi-based Al Arabiya TV, Meshaal said Hamas refused to intervene in the affairs of any country and welcomed any Arab support for the Palestinian cause.

Meshaal thanked Saudi Arabia for playing a “historic role” in Palestine, including the 2007 Mecca Agreement between Hamas and Fatah, which put an end to the internal military confrontations in the Gaza Strip and formed a government of national unity.

“Hamas does not like wars or destruction, but rather performs its duty to defend the Palestinian people and their sanctities.”

Meshaal also called on “the Arab countries and their leaders to look with pride at the victory achieved by the resistance over the Israeli occupation, and how it succeeded in forcing it to retreat strategically in its expansionist project”.

Israel bombed Gaza for 11 days in May, killing over 250 people, including 67 children, and wounding thousands.

Meshaal did not deny that Iran’s military support for Hamas, but he insisted the group is not affiliated to any regional crisis.

“The (Hamas) movement has not and will not belong to a specific axis in the region, and it is a resistance movement that needs the support of everyone.”

He continued: “Hamas has opened up to all countries since its inception, and whoever opens its doors to us, we thank them and we will cooperate with them.”

Iran and Saudi Arabia are historic rivals and have been engaged in proxy wars in the region, such as the Yemen conflict.