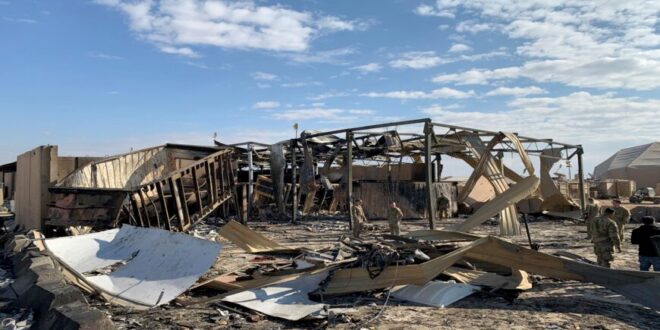 Iraqi Prime Minister Mustafa al-Kadhimi has called on the United States and Iran “to avoid settling scores in Iraq.”

On July 5, three Katyusha rockets targeted Ain al-Asad air base in the western province of Anbar. No casualties have been reported yet. On the same day, a drone tried to attack the US embassy in Baghdad but failed after the C-RAM defense system shot it down.

The United States last week targeted militias on the Iraqi border with Syria, killing a number of soldiers from the Popular Mobilization Units (PMU). The attack was a response to the militias’ previous attacks on several US bases and convoys.

Following the US attack, Hadi al-Amiri — head of the Fatah parliamentary bloc, which includes political wings of Iraqi militias — praised the continuing attacks against US facilities in Iraq by Iran-backed militias and said the United States would not have reduced its troop numbers last year had the resistance movement not struck US bases and interests in the country.

“The reason for the American withdrawal from Iraq is the heroic resistance strikes that made the American forces withdraw from Iraq in the manner of defeat,” Amiri said.

The head of Kataib Sayyid al-Shuhada, an Iran-backed militia that was targeted by the US and lost four fighters, vowed to retaliate for the US strikes. Abu Alaa al-Walae told the Associated Press in an interview in Baghdad July 5 that the response “will be a qualitative operation [that could come] from the air, the sea, along Iraq’s border, in the region or anywhere. It’s an open war.”

The Pentagon has reduced the number of US troops in Iraq since the three rounds of strategic dialogue between Washington and Baghdad began last July, and as of this January there were only 2,500 remaining in the country.

On July 3, Amiri asked the Iraqi government to put an end to the US presence immediately, which is contradictory to his previous request for US withdrawal based on a timely and mannered schedule.

Flirting with the militias, Amiri blamed the United States for poor electricity service in Iraq, saying the “presence of the occupying US in Iraq means lack of services and security.”

The Coordinating Committee of Iraqi Resistance, which consists of representatives of Iran-backed factions within the PMU, issued a statement announcing an open war with the United States and speaking about unlimited revenge until all US troops leave the country.

Kataib Hezbollah spokesperson Mohammed Mohi said on July 4, “We will shock the US forces with surprising operations in Iraq.”

The escalation is not only against the United States but also against the Iraqi government, as the militias view Iraqi Prime Minister Mustafa al-Kadhimi’s policies as favoring US interests in Iraq. This as Kadhimi condemned US airstrikes on Iraq and asked it to respect Iraq’s sovereignty.

Kadhimi tweeted on July 4: “We want the Americans and the Iranians to avoid settling scores in Iraq. For years we were an arena of collision and conflict. And it is upon us to choose political negotiations to solve the differences and all would benefit from the outcomes of de-escalation.”

The Iraqi parliament voted in January 2020 following the assassination of US troops to end the US troop presence in Iraq. Only Shiite members of the parliament attended the session. Sunnis and Kurds boycotted it as a sign of objection.

Saadi blamed the government for remaining silent on the US attacks against the PMU and for failing to protect Iraq’s sovereignty, and he accused Kadhimi of being subjugated to American dictates.

To resume pressure on the government, Saadi said, “All foreign forces are rejected from Iraqi soil, and the delay in removing them is categorically rejected.” He challenged Kadhimi to appear before parliament so as to question him about the alleged major blunders he has committed in governing Iraq.

The above statement hints that militias are making the case to expel US and foreign forces, including NATO forces, from Iraq, even as the Islamic State (IS) continues its attacks, especially in remote areas in the north and west.

IS is accused of damaging electrical towers in order to worsen the living conditions of Iraqis create anti-government sentiment among the people.

NATO announced last February an increase in its troops in Iraq, which caused the militias to complain about the decision and target some NATO bases.

The militias’ resistance to the presence of any foreign force in Iraq is a clear message to Kadhimi, who has just returned from Brussels where he met with NATO ambassadors to discuss the expansion of cooperation of security and training coordination to fill the security vacuum that will likely follow US withdrawal.

US President Joe Biden’s decision to strike against the militias in Iraq and Syria reflected a new red line to retaliate, whether or not American personnel are killed and injured — a line previously undrawn by the Trump administration. A senior US official said to The Washington Post on the condition of anonymity, “We have a responsibility to demonstrate that attacking Americans carries consequences, and that is true whether or not those attacks inflict casualties.”

This all comes in conjunction with the US preparation to draw down its footprint from the region by initially removing Patriot air defense system batteries from several Gulf countries and also Iraq, which would lead to increasing militia attacks against US and other foreign bases.

The actions by pro-Iran militias in Iraq are also linked to broader developments in US-Iran relations. The seventh round of talks in Vienna among the parties to the Joint Comprehensive Plan of Action (JCPOA) and the United States, which withdrew from the nuclear deal in May 2018, have yet to begin.

In these circumstances, Iraq is expected to witness more escalation between the US and the militias, at least in the near future.