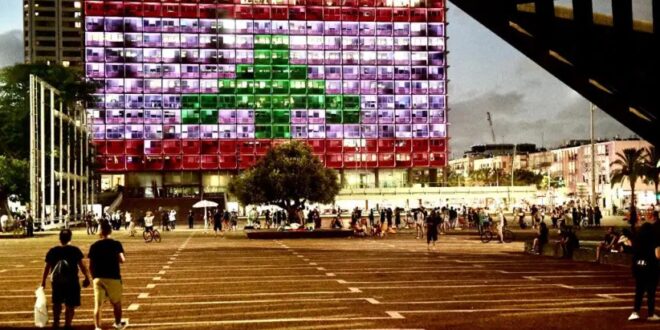 Hezbollah is the most dangerous terrorist organization in the world, and has a stranglehold on part of Lebanon. However, every country has extremists and local problems.

Israel’s neighbor is in trouble, and when a neighbor needs help – even if it’s an enemy state – it is incumbent to provide assistance.

In this case the neighbor is Lebanon, a state with which Israel shares many common attributes. Both Israel and Lebanon have diverse populations and complex histories. We are both part of the long trajectory of the Middle East and have civilizations that date back millennia. However, recent political divisions and the hijacking of Lebanon’s politics by Hezbollah have made relations difficult.

Now amid an unprecedented crisis, Lebanon deserves aid, and there is no better country well-placed to give that aid than Israel. Defense Minister Benny Gantz has offered to assist Lebanon as it continues to suffer from a worsening economic crisis.

“As an Israeli, as a Jew and as a human being, my heart aches seeing the images of people going hungry on the streets of Lebanon,” he wrote Sunday on Twitter. “Israel has offered assistance to Lebanon in the past, and even today we are ready to act and to encourage other countries to extend a helping hand to Lebanon so that it will once again flourish and emerge from its state of crisis.”

The next day, Gantz sent a formal proposal to UNIFIL to provide aid to Lebanon.

Even though the chances the Lebanese government will actually respond in the affirmative to Israel’s offer are close to nil, the Gantz proposal illustrates Israel’s important role as a light unto the nations, willing to do the tikkun olam that is part of Jewish tradition. As a Jewish state, we know all too well what it means to be poor, isolated, abandoned and at the mercy of things beyond our control.

Those that brush off the offer as merely a PR gimmick by Israel, one that Jerusalem knows it won’t have to go through with, are cynically missing the point.

Lebanon today is suffering. With currency exchange rates spiraling to new lows, people are losing money in their accounts. Gas prices are too high, and there are shortages. Lines are long, and the heat of the summer is making many things impossible. Violence is percolating. There is no government, and instead, Saad Hariri, who is the prime minister-designate, has had an impossible time trying to create a functioning coalition.

Lebanon desperately needs some assistance. According to an assessment released by UNICEF on Monday, 77% of Lebanese households don’t have enough money to buy food. As we have reported, the country’s medicine importers have warned they have run out of hundreds of essential drugs. Electricity outages and gas shortages are commonplace, and the Lebanese Armed Forces announced it was offering tourists helicopter rides for $150 to make money.

Of course, we cannot ignore reality. Hezbollah is the most dangerous terrorist organization in the world, and has a stranglehold on part of Lebanon. It routinely threatens to destroy Israel. Lebanon also suffers from Iran’s tentacles.

However, every country has extremists and local problems. We have an opportunity to turn a new page. Lebanon and Israel can work together on maritime disputes and other issues. Lebanese and Israelis have been friends in the past, and Jews and Shi’ites, Sunnis, Druze and Maronites, Armenians and Greek Catholics, have all had shared experiences in the past. Modern politics has hijacked this coexistence.

What is needed is a unique, unprecedented and innovative solution that will enable some support from Israel for our cousins in Lebanon. The international community could show that it doesn’t just thrive off the conflict, and step in to help as well. Human rights groups and coexistence groups can showcase their importance now to step up.

In addition, our close friends in the UAE, Bahrain, Morocco and Sudan may provide a way to aid Lebanon in this time of troubles. This could build on the emerging coexistence and new ties emerging in the region and Eastern Mediterranean.

Lebanon needs help, and Israel is offering it. If only life in the Middle East was as simple as that. Perhaps with the assistance of the above bodies and countries, it can be.