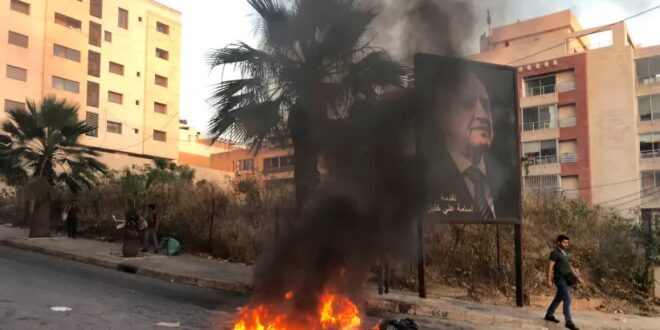 Sources not affiliated with Hezbollah highlighted different components of the crisis, while some observers criticize focusing solely on the economic dimensions in the country.

As Lebanon nears the brink of collapse both politically and economically, news outlets within the country vary widely in coverage of the issue.

According to Prime Minister Hassan Diab, Lebanon is days away from a “social explosion.”

Defense Minister Benny Gantz tweeted on Tuesday that Israel sent an offer of aid to the United Nations Interim Force in Lebanon to help with the “dire economic situation,” especially given “Hezbollah’s attempts to deepen Iranian investments in the country.”

The home page of Al-Akhbar’s website, a news site that has been criticized for its support of Hezbollah, featured comments from Maronite Patriarch Bechara Boutros al-Rai. Rai focused his blame on Prime Minister-designate Saad Hariri and President Michel Aoun, calling on them to form a government, “because Lebanon is a victim of this delay,” and adding that “everyone is violating the constitution.”

Another pro-Hezbollah outlet, Al Mayadeen, had no mention of the situation in the country on its home page, focusing instead on missiles in Iraq and the strength of new weapons of the Islamic Revolutionary Guard Corps.

At the “Palestine is Victorious” conference on Monday, Hezbollah leader Hassan Nasrallah blamed the US for the worsening economic crisis, saying that “the Americans want to besiege, punish and prevent any aid that comes to Lebanon.”

On the other hand, sources not affiliated with Hezbollah highlighted different components of the crisis. The home page of The Daily Star, the leading English-language paper in Lebanon, focused on the economic dimensions, featuring articles on the weakness of the currency and incoming Qatari food aid for the Lebanese army.

However, some observers criticize focusing solely on the economic dimensions in the country.

Hanin Ghaddar, the Friedmann fellow at the Washington Institute for Near East Policy, tweeted on Tuesday: “It’s fascinating that some still look at #Lebanon as an economic crisis. It’s fascinating that some still refuse to look at the elephant in the room. Lebanon is under an Iranian occupation – nontraditional, and via proxy – but an occupation indeed.”

A leading Arabic-language daily paper not affiliated with Hezbollah, An-Nahar, spotlighted articles on the international response to the crisis, including an explanation of Saudi Arabia’s “refusal to help Lebanon” and a feature on US President Joe Biden’s reaction.

Another Arabic-language online paper, Al-Mustaqbal, highlighted the fuel crisis in the country, including an interview with gas station owners who described “queues of humiliation” in order to get gas and the crippling effects of the currency depletion.

Luna Safwan, an independent journalist based in Lebanon, has been tweeting about violent incidents at gas stations amid fuel shortages, including burning cars and shootings around the country.

Other reports in the country heavily criticize the political situation. Zeina Khodr, a senior correspondent at Al Jazeera television and media company, tweeted photos on Tuesday of billboards of the head of General Security, Abbas Ibrahim, being put up along the highway, even though he is a main suspect in the Beirut Port blast investigation that killed 207 people. The billboards featured a photo of Ibrahim with the words “With you, the noblest of men.”

According to Khodr, the “battle for justice is hard when those in power battle against accountability.”

Post Views: 176
Previous Israel needs to help Lebanon – editorial
Next Iran has declared war on the US in Iraq through its proxies – analysis