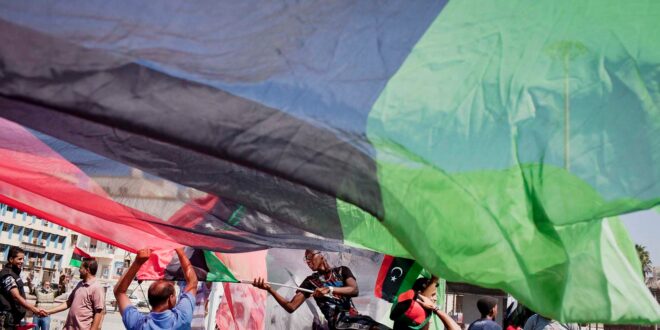 On the Road to Peace, Libya Makes Progress but Hits Pitfalls

Reconciliation must go beyond politics, address issues of transitional justice and set a new vision for a shared future.

After a decade of war and division, Libya has made progress toward peace this year. In March, a Government of National Unity (GNU) was formed to unify the warring Western-based Government of National Accord and the Eastern-based authorities supported by Gen. Khalifa Haftar, who commands forces known as the Libyan Arab Armed Forces (or Libyan National Army). The GNU is a provisional body meant to lead the country to long-delayed elections on December 24. While some progress has been made — a cease-fire agreement has been signed and the executive has been unified — many challenges remain. Chief among those challenges is developing a framework for national reconciliation and addressing the destabilizing role of foreign powers.

Wilson: The elections slated for December are seen as critical to ending a decade of chaos and war in the country. Beyond that, completing the unification of national institutions across the East-West divide remains a top priority. This has begun in some cases, and while largely a positive step forward, it seems that sometimes the symbolic unification has not been met with associated administrative integration. For instance, some key positions in the Benghazi branch of the Ministry of Justice have not been filled, causing an inability to receive and utilize funding because there is no authority to do so.

The Commission of Civil Society — responsible for, among other things, registering and authorizing work of international and domestic organizations — also has a key role to play in supporting these organizations’ work on the ground. However, there is still an administrative divide between the official body in the East and a parallel one that was formed in the West, which has recently tried to put onerous restrictions on how civil society can work. Not only are civil society organizations critical for different sectors that the government is challenged in reaching, but they also represent a part of society that can support fundamental freedoms. The administrative challenges hamper this possibility.

This is the latest manifestation of the ongoing debate surrounding centralization versus decentralization in Libya. It is a complex issue, with roots in Libya’s three historical regions of Cyrenaica (East), Tripolitania (West) and Fezzan (South). With the seat of government and the majority of national institutions in the West, other regions have perceived being marginalized.

In addition, reconciliation as an issue is becoming more and more prominent. The newly established GNU has formed a commission to implement “comprehensive national reconciliation.” This was a topic at the second Berlin Conference, which took place on June 23. While a valuable endeavor, it is clear that this portfolio is a point of contention between different governmental bodies and regions, while there is no clear idea of what the reconciliation will lead to. Ideally, reconciliation should touch on more than politics to include matters of transitional justice and how to set a new vision for a shared future, a point that civil society partners stressed as a priority.
What have been the challenges and successes of the new Government of National Unity so far, and what should it focus on?

Wilson: The government was welcomed with high hopes, but the context in which it is operating is quite challenging. It should be remembered that the GNU has only been in power for three months; even so, it has named numerous priorities — such as reconciliation — all of which cannot be implemented before December elections. Moreover, foreign military involvement in the Libyan conflict has added layers of complexity. While removal of foreign troops is a priority, the interim GNU is not equipped to deal with this by itself, and there are still fundamental questions about who controls the armed forces.

Moreover, it needs to make additional substantive progress on unifying institutions. Toward that end, there has been progress unifying the Central Bank of Libya (CBL). One of the underappreciated reasons that the GNU was able to form at all was that the national government would take on the debt of the parallel governmental institutions in the East in exchange for those bodies halting their use of alternative revenue sources and relying on the CBL in Tripoli instead. Recently an audit was conducted under U.N. auspices and delivered to GNU Prime Minister Abdulhamid Dbeibeh and other officials to catalyze the CBL unification. But whether that momentum will translate into one CBL that operates transparently is uncertain.

The legitimacy the GNU should be shored up through delivering services to all three regions as equally as possible. This is important not only symbolically — and should be accompanied by very public campaigns — but also because Libyans have suffered after years of war. Deteriorated infrastructure, liquidity crises, lack of health care and other problems have all been commonplace in recent years. With summer here, electrical cuts will likely sap Libyans’ energy literally and figuratively along with their patience with a new government. Services should be delivered with and through local officials to help strike a reasonable approach to decentralization between central, regional and local authorities. This would help move forward a new social contract that needs to be negotiated.

The other task the government needs to deliver on is elections themselves. Administering them so they are free and fair, and so that people want to and are able to participate, is the main goal. In line with this, they need to be as free of violence as possible, because violence will diminish the legitimacy of any outcomes.
A core element of any discussion about Libya is the security landscape. What are the latest developments on that front?

Abouaoun: There are multiple security challenges in Libya right now and resolving them will certainly require a solid and legitimate political foundation. First and foremost among these challenges is the presence and active role of a multitude of foreign military actors who are in Libya to defend the interests of specific regional and international powers, which is a major obstacle to stabilizing Libya. However, these actors are now tied to local political groups and addressing the issue requires an intense trust-building exercise between Libyans themselves.

On another hand, Libya also suffers from the proliferation of armed non-state actors, some of which have even embraced semi-official roles. The main issue with these groups is that they operate outside the command and control mechanism of the government. In the last year or so, many have promoted a disarmament, demobilization and reintegration (DDR) plan to resolve the issue of non-state armed actors. Absent a legitimate political framework that would address the security concerns of the majority of Libyans, the concept of DDR is not feasible in Libya. Last but not least is the issue of who commands Libya’s armed forces, which remains a very divisive issue between the East and West.

Security issues in Libya cannot be looked at in isolation from the political developments and the level of trust among the various Libya constituencies. Both the security and political tracks should go hand in hand.
Libya is known to be a diverse country. How is this diversity playing out in the ongoing conflict?

Abouaoun: Although Libyans are primarily of Arab and Berber origins, the country is home to non-Arabized Berber groups and other groups all structured along 20 major tribal lines. As many other Middle Eastern and North African countries, Libya has not managed its diversity well. Under longtime dictator Muammar Qaddafi, Libyans were forced to deny this diversity and instead focus on a national identity imposed by the regime itself. Moreover, they were forced to believe that their own ethnic or linguistic identity is mutually exclusive with their identity as Libyans.

After 2011, ethnic and linguistic groups faced the same exclusion practices by the new power holders in Tripoli and Benghazi. At best, these groups, such as the Tuaregs and the Tebus, were instrumentalized in the East-West confrontation. In many cases, they were persecuted both physically and politically. These groups look now at the window of opportunity created by the Libyan Political Dialogue Forum and the upcoming election in December 2021 as the last chance to be part of Libya’s future. It is therefore essential for the international community to encourage and support Libyan authorities to implement a rights-based framework for political and social inclusivity. Short of this, the grievances of these groups will continue to grow and the appetite of regional and international powers to instrumentalize these grievances will persist, thus impeding stabilization efforts.