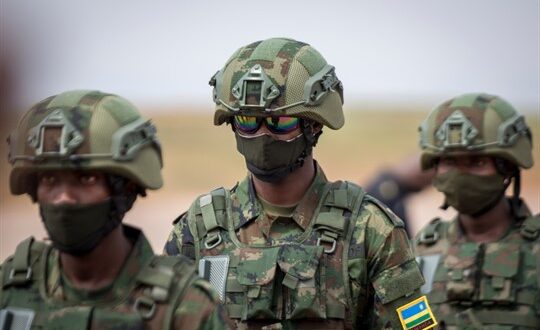 A violent insurgency in Mozambique’s northernmost province of Cabo Delgado is sparking fears that the area could become the next frontier for global jihadism in Africa. In recent years, young men, sometimes carrying the black flag of the Islamic State, have swept hundreds of thousands of people off their land in the natural gas-rich province. The militants’ attacks have often been marked by beheadings and mutilations, including of children.

All told, more than 3,000 people have been killed in the violence. Mozambican security forces have struggled to contain the insurgents, who in late March stormed the northern town of Palma, the gateway to multibillion-dollar natural gas projects that were being constructed with the investment of major multinational oil firms like France’s Total. The attack came only a few weeks after the U.S. State Department formally designated “ISIS-Mozambique”—also known as Ansar al-Sunna or Ahlu Sunna Wa-Jama, though many locals refer to it as al-Shabab, an Arabic term meaning “the youth”—as a terrorist organization.

The ISIS threat on the continent is real. Already, the group’s local franchises in Nigeria and the Sahel have expanded rapidly in recent years, foreshadowing what might happen in Cabo Delgado. International pressure is thus mounting on the Mozambican government to deal with an insurgency that many analysts fear could have knock-on implications for the security of neighboring states, including South Africa. Officials there fear that Cabo Delgado could become a platform for South African extremists to gain experience before coming back to unleash attacks in major cities such as Johannesburg.

However, viewing this crisis only through a counterterrorism lens is insufficient, as it could lead Mozambique’ partners to focus too much of their resources on military operations. The militants will only be defeated through a combination of military and non-military means, and crafting such a strategy requires understanding the local dynamics underpinning Cabo Delgado’s insurgency.

It is true that many of the militants’ leaders appear to be hardened jihadists. They include fighters from neighboring Tanzania, who are part of Islamist networks that have proliferated on the Swahili coast of East Africa. When designating ISIS-Mozambique as a terrorist organization, Washington also named a Tanzanian national, Abu Yasir Hassan, as its leader. But while the “brains” of the group include foreigners, the “muscle” is primarily Mozambican. The group’s rank-and-file are locals, mainly poor fishermen, frustrated petty traders, former farmers and unemployed youth. While some of them may well have become committed jihadists, a majority of them have locally based motives for joining the group.

Indeed, the genesis of the insurgency in Cabo Delgado stems from a crisis that was visible as far back as 2007, when frustrated youth, mainly from the Makua ethnic group, began denouncing the authority of local religious leaders. Their activism had an Islamist tinge, as they pushed for alcohol bans while opposing the enrolment of children in state schools and the right of women to work. But they also decried their perceived economic exclusion amid the discovery of vast deposits of rubies and offshore natural gas in Cabo Delgado. Many of them begrudged the influence of Mozambican generals who have business interests in the province and who are drawn from President Filipe Nyusi’s Makonde ethnic group. It is no coincidence that the militants shift to armed revolt in October 2017, a few months after authorities expelled artisanal miners, including Mozambicans and Tanzanians, from mining concessions.

Without a strategy to address these grievances, Maputo responded by sending security forces to Cabo Delgado, even as the militants grew stronger and more influential in the province. Their ranks have continued to swell, with current estimates ranging from 1,500 to 4,000 fighters. The group also appears to be generating substantial revenues, and it has built an intelligence and recruitment network that stretches into neighboring provinces.

Leaders from elsewhere in the region have also mainly focused on security-led solutions for Cabo Delgado. Member states of the Southern African Development Community, or SADC, have even authorized sending troops to the province, with the regional bloc’s technical experts developing a plan for a deployment of up to 3,000 soldiers. In private, however, Mozambican officials balk at the idea of a heavy foreign deployment, fearing they could lose control over it.

Critics of the government say that Maputo is reluctant to accept SADC troops because it does not want foreigners to see the full scope of Cabo Delgado’s illicit economy, which includes drug trafficking networks allegedly tied to businessmen allied with the ruling Frelimo party. The government rejects this claim and argues that a major deployment could turn into a quagmire, much like the SADC’s 2014 deployment of troops to the Democratic Republic of Congo to fight a local armed group, the Allied Democratic Forces. Bogged down in a long conflict in northern Mozambique, SADC troops could become a magnet for more foreign fighters eager to take on international forces and turn the province into a battlefield pitting perceived Western-backed forces against transnational jihadists seeking to open a new frontier.

It remains unclear whether the SADC will be able to resolve its impasse. In the meantime, Rwanda began deploying up to 1,000 soldiers and police officers. In a significant step, the European Union announced on July 12 that it will set up a military training mission in Mozambique. Such a move is consistent with Crisis Group’s call for Western and other international partners to continue to back the training of new units of elite Mozambican forces, which have already started deploying to Cabo Delgado in recent weeks. Mozambican officials and security experts acknowledge that it will be next to impossible to totally defeat the insurgency, but providing bespoke assistance to Mozambican forces could still allow them to exert pressure on the militants and slow the pace of attacks.

At the same time, if they are truly concerned about the growth of terrorist networks, Mozambique and its regional partners, starting with Tanzania, must look beyond their military options. They will need to step up intelligence and law enforcement cooperation to tighten the net around any transnational jihadists who may be trying to tunnel their way into a crisis that ultimately started as a local revolt.

Finally, resolving the crisis will require addressing the very grievances that first sparked it. The Mozambican government should start by investing the various World Bank grants that amount to hundreds of millions of dollars to win back the confidence of local communities in Cabo Delgado. This gesture of goodwill could allow the government to open communication channels with the militants who are sons of these communities. Without such a dialogue, there will likely be no end to the conflict.