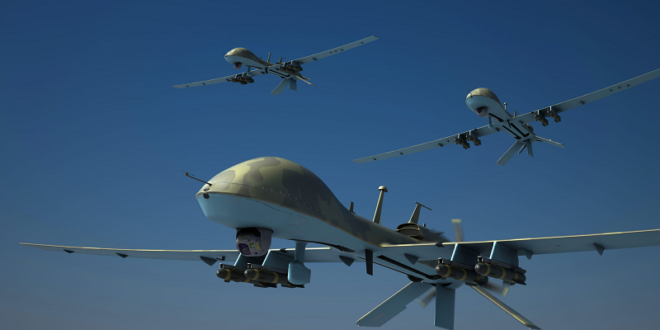 Former Air Force analyst Daniel Hale is going to jail for revealing the extent to which US drones kill civilians.

The District Court of Alexandria, Virginia on Tuesday sentenced former Air Force intelligence analyst Daniel Hale to nearly four years in prison. He was charged under the Espionage Act for leaking secret documents on the Obama administration’s clandestine drone strike operations in 2014 and 2015.

The documents, which were published in October, 2015 by The Intercept, exposed the horrific details of U.S. drone warfare in Somalia, Yemen, and Afghanistan, as well as a rulebook on how the U.S. government adds individuals to its terror watchlists and locates them. In March, Hale pleaded guilty to one count of violating the Espionage Act.

It’s frustrating to see that the Biden administration is continuing to use the Espionage Act to crack down on whistleblowers, especially at a time when government accountability and responsible national security policies are urgently needed. For the past two decades, the so-called “War on Terror” has undermined the rule of law and provided cover for the executive branch to wage secret, unconstitutional wars with impunity. Charging those who expose this injustice as spies is not the answer — the administration must pursue meaningful accountability and an overhaul of U.S. counterterrorism policies.

The documents Hale leaked revealed that the Obama administration established an extrajudicial process for choosing its targets and killing them, often based on scant evidence that the target posed a “continuing and imminent threat.” They also revealed that more civilians were killed during these strikes than previously thought. During five months of a special operations drone campaign in Afghanistan, nearly 90 percent of those killed by U.S. airstrikes were not the intended targets. All together, Daniel Hale’s leaks showed the public just how expansive, illegal, and needlessly destructive Obama’s secret drone warfare had become.

On his first day as president, Biden suspended Trump-era rules governing lethal strikes outside of recognized armed conflicts, which had authorized the United States to conduct airstrikes against any terrorist group that posed a “threat,” with only “reasonable certainty” (rather than “near certainty,” which still applied to women and children) that no male civilian targets would be killed. To give itself time for an extensive review of its own future guidelines, the Biden administration introduced an interim policy that requires the White House to approve strikes outside of Syria, Iraq, and Afghanistan. The review was originally expected within 60 days, but it is yet to be finalized.

Daniel Hale’s case raises a glaring problem in the relationship between U.S. citizens and the illegal, immoral, and counterproductive activities their government is conducting abroad.

Human rights organizations and legal advocates are outraged by Hale’s sentencing. On Tuesday, the ACLU tweeted: “Daniel Hale helped the public learn about a lethal program that never should have been kept secret. He should be thanked, not sentenced as a spy.”

While of course the U.S. government needs to be able to safeguard its secrets, the Espionage Act does not distinguish between those who intend to harm the United States and share secrets to foreign actors, and those — like Hale — who release information to the American public about illegal government actions that concern thousands of lives. Individuals who are charged under this law cannot discuss intent in their defense or provide evidence of government misconduct. Without information leaks from insiders, Americans would not know about NSA spying, torture at Abu Ghraib, or CIA blacksites. The use of the Espionage Act against insiders who leak such information is not consistent with the values of a democracy, nor the freedom of speech and press.

In his letter to U.S. District Judge Liam O’Grady, Hale describes his experience identifying drone targets, and “watching scenes of graphic violence carried out from the cold comfort of a computer chair.”

“I came to believe that the policy of drone assasination was being used to mislead the public that it keeps us safe,” he said. “I began to speak out, believing my participation in the drone program to have been deeply wrong.”

As we approach the 20th anniversary of 9/11, the U.S. executive branch continues to operate according to its own set of rules that are shrouded in secrecy and contradictions. Biden ordered airstrikes against Syria and Iraq last month, which legal scholars have interpreted as a flagrant violation of constitutional and international law. And just last week, the U.S. military carried out a drone strike in Somalia, despite the White House’s rejection of AFRICOM’s multiple requests to conduct airstrikes in the country. According to the Pentagon, AFRICOM did not need White House approval and had the green light to carry out strikes under “collective self defense.” This calls into question Biden’s establishment of new standards for drone strikes back in January. If there are loopholes in the current approval requirements, how do we know that Biden’s future policy will ensure more stringent regulations?

But the Biden administration has made some moves to end the post-9/11 era. Last week, it released Guantánamo detainee Abdullatif Nasser, who was held for 19 years without charge, to his home country of Morocco. The State Department said this was the first step in a comprehensive process of reducing the detainee population at Guantánamo, and eventually shutting the prison down. The administration has also stated its support for the passage of H.R. 246, which would repeal the 2002 AUMF. And of course, Biden has committed to withdrawing from Afghanistan — though the military is likely to continue airstrikes in the country.

Hopefully, these policy changes will reverse some of the damage that the “War on Terror” has unleashed on U.S. law and civil liberties. But the administration must also work to restore transparency and accountability. As Quincy Institute’s Steve Simon argued in his report on winding down the “War on Terror,” the use of targeted strikes should be significantly reduced. When the administration finalizes its drone policy review, it should implement stricter criteria on permissible strikes, raise the threshold for the use of force outside of armed conflict, and put an end to the normalization of secret warfare.

The American public deserves to know more about the wars that its government is waging abroad. Biden should push to increase transparency as much as possible, without compromising vital national security. And finally, the administration must stop charging whistleblowers under the Espionage Act as a way to deflect from lawlessness and injustice on behalf of the government.

Post Views: 310
Previous Lawrence in Arabia – War, Deceit, Imperial Folly and the Making of the Modern Middle East
Next The US doesn’t need Europe’s help in the ‘Indo-Pacific’