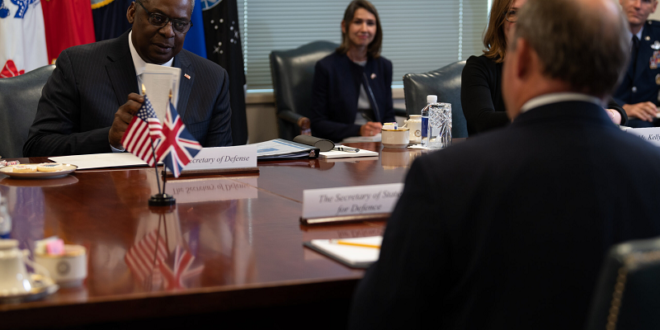 Defense Secretary Lloyd Austin inadvertently introduced a conversation about where the EU should focus its security priorities.

Some of Secretary of Defense Lloyd Austin’s remarks in Singapore on Tuesday are a severe embarrassment to the British government. Whether Austin realized this or not, he undermined one part of Biden administration strategy with regard to Europe and China when he said, “If…we focus a bit more on Asia, are there areas where Britain can be more helpful in other parts of the world?”

Austin’s statement is an implicit recognition that the British carrier group (whose planes and escort vessels are in fact chiefly American) dispatched to the “Indo-Pacific” does very little in practical terms to strengthen U.S. forces against China. The purely symbolic warships dispatched by European NATO members to the region do even less, which is to say nothing at all.

On the other hand, as Austin suggested, Europe is facing challenges closer to home where Britain could play a more useful role, and Europe could relieve the United States of some of its present commitments. Of these, the most menacing is the spread of Islamist revolt across the Sahel region, and the way in which it overlaps with the increasing decay of the Nigerian state.

British and European calculations in making gestures of support to the United States in the “Indo-Pacific” are somewhat different. For the British establishment, it is part of their continuing desire to be seen as playing the role of a great power on the world stage, without bankrupting Britain in the process. This can only be done on the shoulders of the United States. Since Brexit, this desire has become an obsession on the part of the Johnson government in Britain, because of their promises that as a result of leaving the EU, Britain would regain the freedom and independence to become great again.

Paradoxically but inevitably, this desire for independence has in fact led to even greater dependence on the United States. Yet the crazy thing — as hinted at in Austin’s remarks and stated explicitly by President Obama and his administration — is that sensible members of the establishment in Washington never wanted Britain to leave the EU. This was not just because they regarded Britain as a channel for American influence within the EU, but because within Europe, Britain can make a real military contribution — not due to the strength of its forces, but because Britain (together with France) has one of the only two armies that is actually willing to fight.

The strategy of the other European members of NATO is to avoid serious warfare and the cost of creating effective armed forces, and to leave responsibility for the defense of Europe in the hands of the United States. To this end however, they give the minimum help necessary to make sure that the United States maintains that commitment to Europe and they do not have to take responsibility themselves. As German officials admitted to me in the past, Germany could not be relied on even to send troops to fight in the Balkans should another war break out between Serbia and her neighbors.

From the U.S. point of view, this is a fool’s bargain. European military help to America is almost insignificant compared to American military help to Europe; and the deteriorating situation in the Sahel means that the needs of European security are likely to increase greatly in the years to come.

Robert Kaplan warned 27 years ago in “The Coming Anarchy” that the degradation of West African states and societies posed a serious threat. He may have been a bit premature, but he was also prophetic. The troubles of the region are the result of a combination of factors: terrible standards of governance; deep poverty and lack of development; enormous population growth (Nigeria alone is projected to have a population of around 400 million by 2050); and growing ecological degradation, which in the future is likely to be made much worse by climate change.

Especially since the destruction of the Libyan state in 2011 (due in large part to the misguided intervention of the United States, Britain and France), to these factors has been added a steep rise in Islamist extremist groups. In Nigeria, the monstrous actions of Boko Haram have overlapped with other growing conflicts between pastoralists and agricultural ethnicities over access to increasingly scarce water resources; between increasingly powerful bandit groups and the state; and between the state and a range of separatist forces.

According to the United Nations, the conflict with Boko Haram alone in Nigeria has contributed to the deaths of around 350,000 people, making this one of the worst ongoing civil wars.

The threat to Europe stems not so much from the Islamist extremists themselves, as from the danger that fuelled by local rivalries and socio-economic despair, they will help unleash civil wars across the region that will send a massive flow of refugees northward to Europe. As we have seen from Brexit and the rise of nationalist parties across western and central Europe, mass migration can seriously destabilize European liberal democracy — and future movements from Western Africa may dwarf anything we have seen in the recent past. Insofar as the United States has a vital interest in the maintenance of democracy and successful capitalism in Europe, this is also a threat to America — one by the way which renders insignificant by comparison any threat that Russia or China can or would pose to Europe.

To try to ward off this danger, the European Union needs to make a massive and co-ordinated effort to promote economic development across the region. However, it must also be recognized that in several countries including Nigeria, successful economic development cannot occur unless the security situation is greatly improved, and that so far, local armies have not been adequate to this task. Outside help has been provided overwhelmingly by the United States and France, acting in defense of its traditional client states in the region.

Despite initial successes, the French commitment has been worn down over the years, with more than 50 dead and financial costs to France of almost one billion euros in 2020. President Macron has now declared that he is ending “Operation Barkhane” and reducing France’s troops in the region from 5,000 to fewer than 3,000. He has also asked for increased military help in the region from France’s European partners. Their response to date has been minimal. For example, despite official statements about the gravity of the Sahel crisis, the British contribution so far consists of six planes and fewer than 200 men — a force that could well be called symbolic.

The Sahel, not the “Indo-Pacific,” is where European NATO members can and should make a real commitment to their own security and relieve the United States of some of the burden. And this is where the Biden administration should encourage them to make a commitment, rather than asking for gestures in the Indo-Pacific that impress nobody — the Chinese least of all.

Post Views: 281
Previous How an ex-intel official’s prison sentence exposes the folly of the Espionage Act
Next How deploying hypersonic weapons to counter China creates a collision course to war