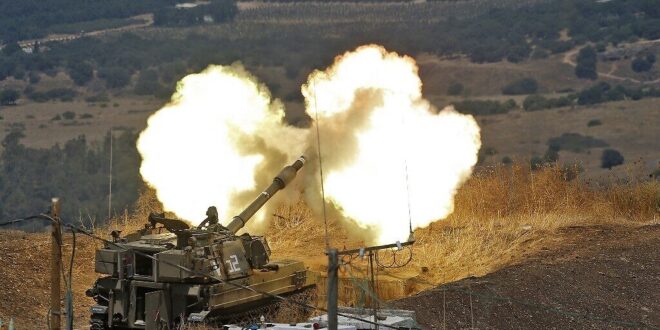 The rockets fired at northern Israel on Friday were the fifth such attack from Lebanon in three months, but the first directly and openly carried out by the Hezbollah terror group since the 2006 Second Lebanon War — indicating a clear change in the dynamics on that frontier, after 15 years in which conflict bubbled just below the surface.

The Blue Line — the unofficial but internationally recognized border between Israel and Lebanon — has largely been quiet in the decade and a half since the war, with just a handful of exceptions, even as the Israel Defense Forces and Iran-backed Hezbollah continued to wage a quieter conflict with one another elsewhere, mostly in neighboring Syria.

Generally speaking, Israel has refrained from conducting strikes in Lebanon, and Hezbollah too halted rocket fire from the land of the cedars. But in recent months, that arrangement has started to break down.

During May’s conflict between Israel and terror groups in the Gaza Strip, Palestinian factions in Lebanon fired rockets at northern Israel three times, apparently with the tacit approval of Hezbollah, which maintains strict control over southern Lebanon. A Palestinian group again fired rockets at northern Israel earlier this week. In these four cases, Israel responded with limited artillery barrages. On Wednesday this was followed by a round of airstrikes on unspecified military targets in the area from which the rockets were fired. These were the first Israeli airstrikes against targets inside Lebanon since 2014.

Following the Second Lebanon War, the threat that emerged on the Lebanese border was another full-scale war. This was what the IDF trained for and worked to postpone or at least improve its chances of winning. In contrast, the situation in the Gaza Strip is far muddier: While there is a threat of large-scale conflict — such as in May or in 2014 — it is far more common for the area to see more limited attacks by Palestinian terror groups and similarly restrained retaliation by the IDF, without the situation deteriorating into all-out war.

At the beginning of this year, the IDF warned that such a dynamic was poised to emerge in Lebanon as well, with Hezbollah feeling increasingly confident that it could launch attacks directly against Israel without risking a full-scale war, one that according to Israeli military assessments would be devastating for Israel and — more so — for Lebanon.

Despite the apparent emergence of this new, more aggressive stance by Hezbollah, the IDF has maintained that the terrorist militia is deterred, both out of fear of the Israeli military and due to the ongoing financial and societal crises playing out within Lebanon, as could be seen this week with rallies against the government to mark the one-year anniversary of the Beirut Port explosion.

Indeed, IDF Spokesperson Ran Kochav told reporters on Friday that the army believes the rocket attack itself “shows Hezbollah’s deterrence, as it fired at open areas.”

But there is reason to question this interpretation. Of the 19 rockets fired at northern Israel on Friday, 10 were shot down by the Iron Dome missile defense system, something that, under the IDF’s air defense doctrine, is normally only done when it appears a projectile is heading to a populated area.

While Hezbollah may not have been intentionally launching a full-scale war with its rocket attack on Friday, it seems it was certainly willing to risk one.

The IDF’s projections for how a war with Hezbollah would break out do not anticipate that the terror group would initiate such a conflict with a sudden, large-scale assault — but rather that such a conflict would kick off with some kind of attack along the border, possibly an ambush against IDF troops, as was the case in the Second Lebanon War, or a rocket or missile attack, to which Israel would respond forcefully.

Hezbollah would then retaliate further, potentially launching large barrages of rockets at the Israeli home front and deploying its Radwan Unit, a special forces detachment that has been specifically trained to capture portions of the Galilee in order to score a public victory over Israel — however fleeting — and to delay Israel in launching its own ground invasion of southern Lebanon. Such an invasion would be necessary, IDF officers say, to take the strategic high ground, the Lebanese mountainous ridge overlooking northern Israeli communities.

Friday’s rocket attack appears then to be a test balloon by Hezbollah to see how Israel’s relatively newly formed government responds.

So far, Israel has indicated that it does not appear poised to take immediate action against Hezbollah besides the initial artillery barrage. The IDF spokesperson told reporters that Israel had “no intention of going to war,” and a senior defense official added that further response would be conducted “in accordance with operational needs and a timeframe that is best suited for Israel.”

How and if Israel retaliates to Friday’s attack will set a precedent for any future aggression by Hezbollah and shape the emerging modus vivendi on the Lebanese border: if it will return to its post-Second Lebanon War calm or if it will again see regular rocket fire.