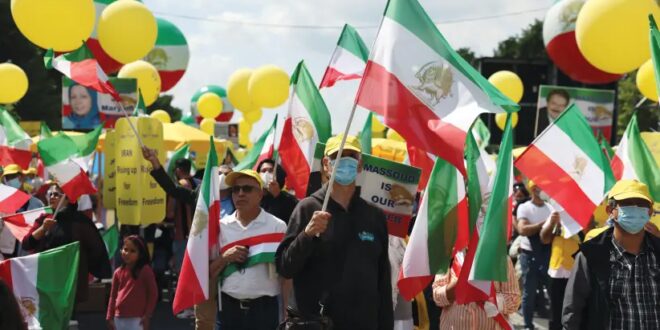 Iran believes it has Israel on the run

Iran is coordinating with Hezbollah, Hamas to target Israel after drone attack on tanker off Oman.

Iran believes it has been able to outplay Israel in the last week following Tehran’s drone attack on the Mercer Street ship.

When tensions rose with the US, UK and Israel after the attack, Iran shifted the frontline to Lebanon and Gaza, targeting Israel with rockets last week. When Israel responded, Iranian-backed Hezbollah fired more than 10 rockets from southern Lebanon at Israel on Friday.

What we are seeing is a multi-front conflict in which Tehran shows it can heat up the Lebanon front, the Syrian front, Gaza and areas off the coast of Oman, like playing a piano in which each key is a threat to Israel.

Iran has been messaging about this for a week via media like Al-Alam TV, which claimed that the drone attack on the ship off Oman’s coast was a response to an Israeli airstrike near Qusayr, Syria. Iran’s Press TV also ran an article by Elijah Magnier noting how Iran is now making the commercial sea lanes a quagmire for Israel. He also asked: “Will Israel stop playing and breaking its teeth in the ‘Axis of the Resistance’ playground?”

Iran’s argument is that the “Palestinian resistance” has shown its readiness to strike at Israel. This builds on the view that the Islamic Republic thinks that Hamas won the conflict with Israel in May after it appears to have encouraged the terrorist group controlling the Gaza Strip to strike at the Jewish state with more than 4,000 rockets.

Iran also encouraged Palestinians in Lebanon to fire rockets, and used a drone to fly from Syria into Israel in May, during Operation Guardian of the Walls.

“The internal situation in Lebanon may be the reason for the resistance’s greater readiness for confrontation, not retreat,” Tasnim News says. “One of the issues to be noted in the clashes in southern Lebanon over the past few days, which began with Israeli aggression and Hezbollah missile responses, [shows] once again Israel’s intelligence failure to assess resistance positions to respond to aggression.”

Indeed, Iran says that the “recent clashes between the Zionist regime and the resistance groups indicate a significant weakness and decline in the intelligence capabilities of this regime, which in turn shows the development of the resistance-oriented capabilities in the field of intelligence.”
IRAN NOW admits that there “is a high level of coordination and intelligence cooperation between members of the Axis of Resistance, which was mentioned by the leaders of the Palestinian Hamas and Lebanese Hezbollah movements during the battle,” Tasnim said. This means that these groups have honed their close contacts in recent months.

Palestinian groups and Hezbollah attended the inauguration of Iran’s new president, Ebrahim Raisi. Hamas leader Ismail Haniyeh went to Tehran to meet with Ali Shamkhani, who is the secretary of the Supreme National Security Council of Iran.

The point Iran is making is that everything is now linked, even more than in the past, from Gaza to Lebanon, to Syria, Iraq and the Gulf of Oman; Iran has an arc of power and proxies that run several thousand kilometers.

What else is Iran thinking?

It believes that Israel’s power of deterrence has eroded. It noted that Jerusalem carried out airstrikes and artillery strikes in Lebanon for the first time since the 2006 war, saying that Israel “thought that the resistance would not respond or would be content to carry out symbolic attacks to the maximum; but the reality is against the will and imagination of the Israelis.”

Iran says that Israel has relied heavily on intelligence technology that led it to think Hezbollah would not respond. It also says that the Jewish state works closely with countries in the region.

“Recent events have shown that they cannot assess the orientation and positions and thinking of the resistance.”
IRAN HAS assessed that Israel made a mistake in believing Hezbollah was suffering from Lebanon’s economic crisis. “This made the Zionist enemy think of changing the fixed rules of conflict between the Israeli army and the Lebanese resistance since the July 2006 war, which, contrary to the Zionists’ expectations, did not change – and Hezbollah immediately responded with aggression with its missiles.”

Iran predicts that escalation might continue. “The general conclusion that can be reached is that the Zionist enemy can no longer assess the positions and orientations of the resistance in Gaza, Lebanon, Iran and other areas dependent on the Axis of Resistance.

“Accordingly, Israel’s repeated intelligence failures may lead the regime to escalate its aggression under the pretext of trying to change the rules of the conflict in its favor, which will certainly be accompanied by more decisive responses from the resistance.”
This is an important Iranian assessment through its messaging that has been put out through its media. The point Iran is making is that it works closely with Hamas and Hezbollah, and that it used them to distract from the growing condemnation of Iran after the July 30 drone attack on Oman.

It also wanted to test Israel’s responses. Hezbollah had a green light from Iran to fire missiles from Lebanon. Hezbollah caused some controversy by using a Druze village to move missiles via a truck. A Hezbollah member was detained and released. The terrorist group also made it clear it could fire the rockets with impunity but also targeted open spaces in the contested Mount Dov area.

Israel also appeared to communicate that it was willing to de-escalate. What is important from Iran’s view is that Hezbollah took responsibility. Previous incidents like this – such as after the Hezbollah drone team was killed in the fall of 2018 and the July 2020 incident near Mount Dov where the IDF said it foiled a Hezbollah attack – are other instances where Hezbollah sought to show it could confront Israel on equal footing.