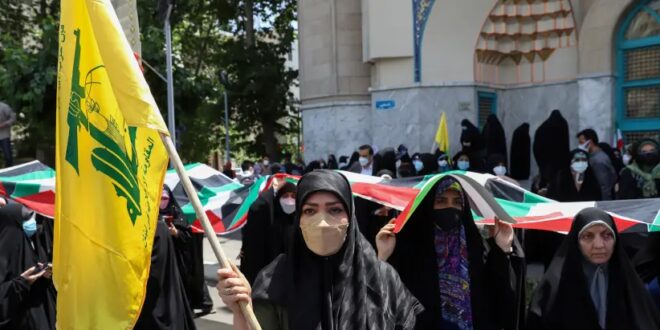 Reports on Saturday evening indicated that IRGC head Hossein Salami had also met the Hezbollah deputy and said that they should prepare for the “collapse” of Israel.

Iran’s new president Ebrahim Raisi hosted a series of prominent terror leaders and pro-Iran proxy group leaders during his inauguration, showcasing how he will want to leverage Iran’s proxies in Iranian foreign policy. The previous Iranian presidents have given him a formidable framework to work with across the region, and it looks like Raisi will want to increase the power of these groups. This comes as Iran’s media is boasting about new warming ties with Iran and also thinks it can get around US sanctions.

Iran brazenly attacked a ship off Oman on July 30 and Iranian-backed Hezbollah has fired rockets at Israel on August 6.
The meeting between key Iranian figures and Iran’s network of terror and proxy groups looks like a kind of meeting of the “five families” in the Godfather, as key figures came together. It’s not the first time this has happened, Iran in the past has hosted Palestinian factions, members of the Hashd al-Shaabi from Iraq, Hezbollah, Houthis and others.

The messaging here is aimed at the region and at the US, Israel and their partners and allies. Reports on Saturday evening indicated that IRGC head Hossein Salami had also met the Hezbollah deputy and said that they should prepare for the “collapse” of Israel. While this is the usual IRGC rhetoric, the recent incidents in Lebanon and off the coast of Oman and in Gaza show Iran is driving threats in the region. Salami said that in the next war any misstep by Israel could lead to Israel’s collapse.

There appears to be real signaling and messaging in the recent meetings. Video posted online appeared to show that Hamas and Hezbollah got pride of place in seating, with the European Union representative seated behind them. Experts have noted that the presence of Hamas leader Ismail Haniyeh showcases how Iran is putting out a message about its commitment to Hamas. Iran was likely behind a recent wave of attacks on Israel in May. The IRGC in Iran, which is close to Raisi and the Ayatollah leadership, is increasingly running Iran and its foreign policy.

In addition to Haniyeh from Hamas, Hezbollah official Naim Qassem was in attendance. The Hamas leader’s presence was noted across the region. Raisi praised Hamas for its “victory” in the recent conflict in May. The presence of the Hamas leader and other terror group delegates was not lost online to commentators who noted their presence and the red carpet they received. Hamas has also been given a red carpet by Turkey’s ruling party in 2020, and appears to have more clout in the region than they once did.

Iran wants to use Hamas more against Israel, as well as wanting to work with Hezbollah, and has been closely watching Israel-Hezbollah tensions in recent days.

In addition Raisi wanted to showcase his interest in Iraqi politics.

Iran greeted a delegation from the Kurdistan Regional Government with a Kurdish flag, which raised eyebrows, but it was also the greeting given to Hashd al-Shaabi head Faleh al-Fayadh (Falih al-Fayyadh) and also Ammar Hakim and other Iraqi figures, that showcases Iran’s real interest in Iraq. It is to be weakened, holed out, its infrastructure taken to Iran and it is to be dependent. It’s not even clear if Iran sees Iraq as a state these days, more a client or area to be used for operations against the US and for missile and drone trafficking, a platform for attacks on Israel and Saudi Arabia.

The IRGC head Hossein Salami met with Hezbollah’s Deputy Secretary-General Naim Qassem, according to reports online posted by Jason Brodsky. Ali Shamkhani, the Iranian two-star general who is the secretary of the Supreme National Security Council of Iran also met with key Iranian proxies. He met with Haniyeh and apparently also Palestinian Islamic Jihad leader Ziyad al-Nakhalah and Faleh al-Fayadh from the Hashd in Iraq. Raisi hailed the Hashd al-Sha’abi forces as a major backing for the development of Iraq who have defended the Iraqi people against hostile plots, according to Iranian media. Fayadh met with Raisi and they appear to have discussed continued pressure against the US in Iraq. Shamkhani also met the Iraqi delegation and urged the withdrawal of foreign forces, a reference to the US.
The meetings Raisi and Shamkhani held, the photo opportunities and the messaging is clear. Iran doesn’t care as much about hosting the heads of governments, as it does about hosting militia and terror group leaders from around the region.

Iran appears to want the whole region to run by a series of miniature IRGCs, basically meaning transferring state resources from official government to “revolutionary” guard type units that have their own, mostly Shi’ite, constituency, and which hold states hostage and siphon off resources. That is what Iran does in Iraq, Syria, Lebanon and Yemen. It systematically pillages the state of resources to move the resources to its proxies, then it uses the weakened state as a launch pad for operations against other countries.

Post Views: 299
Previous Iran believes it has Israel on the run
Next Hezbollah is testing Israel and so far it’s succeeding – analysis

The governments of Greece, Albania, and Kosovo have reacted with shock to the series of …