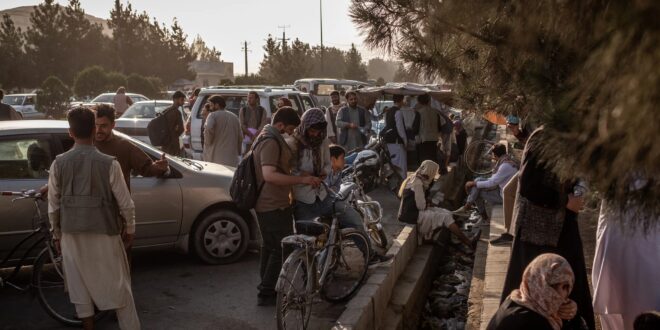 An Islamic State affiliate that is a sworn enemy of both the Taliban and the United States threatens a large-scale attack against the mission at the airport.

The United States has been battling the Taliban and their militant partners in Afghanistan, Al Qaeda and the Haqqani network, for 20 years.

But the biggest immediate threat to both the Americans and the Taliban as the United States escalates its evacuation at the Kabul airport before an Aug. 31 withdrawal deadline is a common rival that is lesser known: Islamic State Khorasan, or ISIS-K, the terrorist group’s affiliate in Afghanistan.

Created six years ago by disaffected Pakistani Taliban, ISIS-K has carried out dozens of attacks in Afghanistan this year. American military and intelligence analysts say threats from the group include a bomb-laden truck, suicide bombers infiltrating the crowd outside Hamid Karzai International Airport and mortar strikes against the airfield.

These threats, coupled with new demands by the Taliban for the United States to leave by Aug. 31, probably influenced President Biden’s decision on Tuesday to stick to that deadline. “Every day we’re on the ground is another day we know that ISIS-K is seeking to target the airport and attack both U.S. and allied forces and innocent civilians,” Mr. Biden said.

The U.S. Embassy on Wednesday warned Americans to stay away from the airport and told anyone outside the perimeter to “leave immediately.”

A senior U.S. official, who spoke on the condition of anonymity to describe confidential assessments, confirmed that the United States was tracking a “specific” and “credible” threat at the airport from ISIS-K, which has carried out dozens of attacks in recent years.

The threats lay bare a complicated dynamic between the Taliban, Al Qaeda and the Haqqani network, and their bitter rival, ISIS-K, in what analysts say portends a bloody struggle involving thousands of foreign fighters on both sides.

A United Nations report in June concluded that 8,000 to 10,000 fighters from Central Asia, the North Caucasus region of Russia, Pakistan and the Xinjiang region in western China have poured into Afghanistan in recent months. Most are associated with the Taliban or Al Qaeda, the report said, but others are allied with ISIS-K.

“Afghanistan has now become the Las Vegas of the terrorists, of the radicals and of the extremists,” said Ali Mohammad Ali, a former Afghan security official. “People all over the world, radicals and extremists, are chanting, celebrating the Taliban victory. This is paving the way for other extremists to come to Afghanistan.”

American officials say they are preparing to combat both immediate and longer-term terrorist challenges in Afghanistan. First and foremost is the threat at the Kabul airport.

Jake Sullivan, Mr. Biden’s national security adviser, said on Sunday that the threat from ISIS-K was “acute” and “persistent,” and that American commanders and other officials were taking all possible steps to thwart any attacks.

That includes striking an unlikely accommodation with the Taliban, at least temporarily, not only to allow safe passage to American citizens and Afghan allies to the airport for flights out of the country, but also to actively defend against an ISIS-K attack.

The leaders of the Islamic State in Afghanistan denounced the Taliban takeover of the country, criticizing their version of Islamic rule as insufficiently hard line, and the two groups have fought in recent years.

An attack on the airport, current and former American officials said, would be a strategic blow to both the United States and the Taliban leadership, which is trying to demonstrate that it can control the country. Such a strike would bolster ISIS-K’s stature in the jihadist world, but that opportunity greatly diminishes after the last American Marine or soldier pulls out.

The Taliban and the Haqqani network, a militant group based in Pakistan, are essentially one and the same, terrorism experts say. Siraj Haqqani has been the deputy emir of the Taliban since 2015. In turn, the Haqqanis are close, operationally and ideologically, to Al Qaeda.

“The Taliban, Haqqani network, and Al Qaeda function as a triumvirate, and one that is very much part of the same militant network, they work together hand-in-glove,” said Colin P. Clarke, a counterterrorism analyst at the Soufan Group, a security consulting firm based in New York.

These three entities are inextricably linked, Mr. Clarke said, and in fact, have grown closer over the past decade, a trend that is likely to continue after the U.S. withdrawal, especially as they close ranks against adversaries like ISIS-K and the growing resistance movement in Afghanistan’s north.

On the other side of the jihadist ledger is ISIS-K. The group is one of many affiliates that the Islamic State established after it swept into northern Iraq from Syria in 2014, and created a religious state or caliphate the size of Britain. An American-led campaign crushed the caliphate, but more than 10,000 ISIS fighters remain in Iraq and Syria, and ISIS affiliates like the Sahel or the Sinai Peninsula are thriving.

But ISIS-K has never been a major force in Afghanistan, much less globally, analysts say. The group’s ranks have dropped to about 1,500 to 2,000 fighters, about half from its peak levels in 2016 before American airstrikes and Afghan commando raids took a toll.

Since June 2020, however, under an ambitious new leader, Shahab al-Muhajir, the affiliate “remains active and dangerous,” and is seeking to swell its ranks with disaffected Taliban fighters and other militants, the U.N. report concluded.

“They have not been a first-tier ISIS affiliate, but with the Afghan commandos gone and the American military gone, does that give them breathing room? It could,” said Seth G. Jones, an Afghanistan specialist at the Center for Strategic and International Studies in Washington.

Even as the group’s overall ranks have declined in recent years, Mr. Jones said, ISIS-K has maintained cells of clandestine fighters who have carried out terrorist attacks.

United Nations counterterrorism officials said in the June report that the Islamic State had conducted 77 attacks in Afghanistan in the first four months of this year, up from 21 in the same period in 2020. The attacks last year included a strike against Kabul University in November and a rocket barrage against the airport in Kabul a month later. ISIS-K is believed to have been responsible for a school bombing in the capital that killed 80 schoolgirls in May.

“Kabul has been the target of the majority of ISIS-K’s most sophisticated and complex attacks in the past,” said Abdul Sayed, a specialist on jihadist groups in Afghanistan and Pakistan who is based in Lund, Sweden.

Some analysts believe ISIS-K may have links to the Haqqani network. Indeed, Shahab al-Muhajir, the ISIS leader, is reported to have been a former midlevel Haqqani commander before defecting.

“Since many ISIS commanders and fighters were once part of Al Qaeda or an Al Qaeda franchise, it is not surprising that there should be this contact,” said Bruce Hoffman, a terrorism scholar at the Council on Foreign Relations. “In most cases, this contact has not produced any lasting reconciliation.”

The rivalry between the Taliban and its partners and ISIS-K will continue after the last American troops leave, analysts say. And the fragile cooperation between American and Taliban commanders is already fraying, and the two could easily revert to their adversarial stances.

The American military is treating the Taliban’s red line about Aug. 31 seriously. The recent evacuations have been possible because of Taliban cooperation — in allowing most people to reach the airport unscathed, and in working against the threat of ISIS attacks, commanders say.

After Aug. 31, military officials say, there is a real concern that at best, the cooperation with the Taliban will end. At worst, that could lead to attacks on U.S. forces, foreign citizens and Afghan allies, either by Taliban elements or by their turning a blind eye to Islamic State threats.

Mr. Biden has pledged to prevent Afghanistan from again becoming a sanctuary for Al Qaeda and other terrorist groups that want to attack the American homeland. Military commanders say that will be a difficult task, with no troops and few spies on the ground, and armed Reaper drones thousands of miles away at bases in the Persian Gulf.

In the February 2020 agreement with the Trump administration, the Taliban vowed not to allow Al Qaeda to use Afghan territory to attack the United States. But analysts fear that is not happening and that Al Qaeda remains the longer-term terrorism threat.

As the U.N. report put it: “The Taliban and Al Qaeda remain closely aligned and show no indication of breaking ties.”