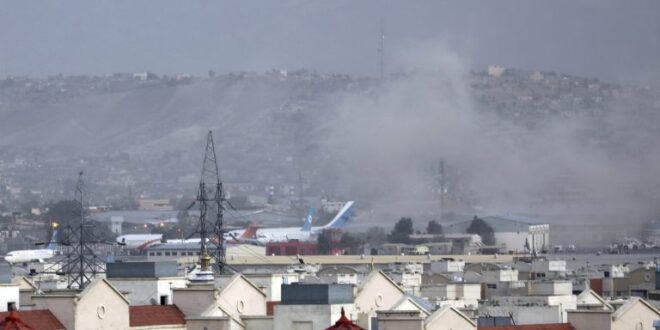 Multiple suicide attacks claimed by IS-K rocked Kabul yesterday, injuring 140 people and killing another 60, including 11 U.S. Marines and one U.S. Navy medic, with these numbers likely to increase.

A senior U.S. official had warned on Wednesday night of a “specific” and “credible” threat by IS-K against the Kabul airport, though it’s unclear what preventive measures were taken.

The blasts come as the U.S. and other countries race to evacuate citizens and Afghans ahead of President Biden’s August 31 withdrawal deadline.

There is growing concern that the latest attacks may just be an opening salvo to a lengthy terrorist campaign perpetrated by IS-K in Afghanistan.

Multiple suicide attacks claimed by the Islamic State Khorasan (IS-K) rocked Kabul yesterday. The attacks targeted soldiers and civilians in and around Hamid Karzai International Airport and resulted in hundreds of injuries and dozens of casualties, with both numbers likely to increase as official tallies are gathered. IS-K is the Islamic State’s Afghan branch, which brings together an estimated 1,500-2,000 Afghan and Pakistani fighters; it is active in Nangarhar and Kunar provinces, while still retaining the capability to launch spectacular attacks into the heart of Kabul. Reports indicate the attacks resulted in 60 confirmed deaths, including 11 U.S. Marines and one U.S. Navy medic, and injured 140 others who were taken to Kabul’s hospital. One blast occurred near the airport’s Abbey Gate (where American and British forces have been stationed to process evacuations) and another close to the nearby Baron Hotel (being used as a staging post by Western nations for evacuations), with reports of further explosions close to a sewage canal near the airport, where Afghan civilians were waiting to be processed. The Abbey Gate explosion is suspected to be a suicide bombing involving two perpetrators, where one attacker detonated his explosives in a crowd of people before a second attacker opened fire. The U.S. says there have been an unknown number of casualties while the UK said there is no record of British deaths so far. John Kirby, Pentagon press secretary, said “We can confirm that the explosion near the Abbey Gate of the Kabul airport has resulted in an unknown number of casualties.”

A senior U.S. official had warned on Wednesday night of a “specific” and “credible” threat by IS-K against the airport. Senior U.S. officials said Wednesday’s warning from the embassy was related to specific threats involving the Islamic State group and potential vehicle borne improvised explosive devices (VBIEDs), though it remains unclear whether specific preventive measures were, or could have been, taken. Australia, Britain, and New Zealand also advised their citizens Thursday not to go to the airport. Taliban spokesman Zabihullah Mujahid denied that any attack was imminent in the wake of these warnings. Despite this assertion, early on Thursday, the Taliban sprayed a water cannon at civilians gathered at one airport gate to drive the crowd away, as someone launched tear gas canisters elsewhere.

The blasts come as the U.S. and other countries race to evacuate citizens and Afghans ahead of President Biden’s August 31 withdrawal deadline. Pentagon Press Secretary Kirby confirmed in a Twitter post on Thursday morning that “Evacuation operations in Kabul will not be wrapping up in 36 hours. We will continue to evacuate as many people as we can until the end of the mission.” U.S. President Joe Biden last week had started publicly warning about the threat of an attack, which he said might come from IS-K. The threat of an attack appeared to be one of the main reasons why Biden didn’t want to extend the deadline of the evacuation. Meanwhile, Canada joined several European nations in wrapping up evacuation operations. Speaking yesterday evening, President Biden paid homage to the fallen U.S. servicemembers, correctly labeling them heroes. Commenting on those responsible for the terrorist attack, Biden proclaimed, “We will hunt you down, and make you pay.” President Biden then promised to strike IS-K militants, while also completing the mission of evacuating American citizens and Afghan allies from the country.

The Taliban have fought against Islamic State militants in Afghanistan and remain at odds with the rival terrorist group. But IS-K fighters were likely freed from prisons along with thousands of other inmates—along with former al-Qaeda fighters—during the Taliban’s rapid advance through Afghanistan. Extremists may have seized heavy weapons and equipment abandoned by Afghan troops, although CENTCOM commander General Kenneth McKenzie suggested that it does not appear that IS-K has MANPAD (man portable air defense systems) capabilities that would pose a serious threat to aircraft. IS-K fighters have a history of waging attacks against soft targets similar to the crowds seen outside Kabul’s airport. There is growing concern that the latest attacks may just be an opening salvo to a lengthy terrorist campaign perpetrated by IS-K against any Western troops remaining in Afghanistan, as well as against the Taliban and its allies, al-Qaeda, and the Haqqani network. There is also a possibility that further IS-K violence will legitimize the Taliban’s narrative and role as the de facto government of Afghanistan as foreign governments partner with them and share intelligence and capacities in order to address further IS-K attacks. The escalation in violence on all sides would plunge Afghanistan directly back into civil war and increase the likelihood that foreign fighters and jihadist terrorists from throughout the region and beyond could seek to descend upon Afghanistan to join these various groups. If that happens, it remains possible that al-Qaeda or IS-K could look to further develop their external operations planning capabilities and attempt to conduct attacks beyond Afghanistan’s borders.