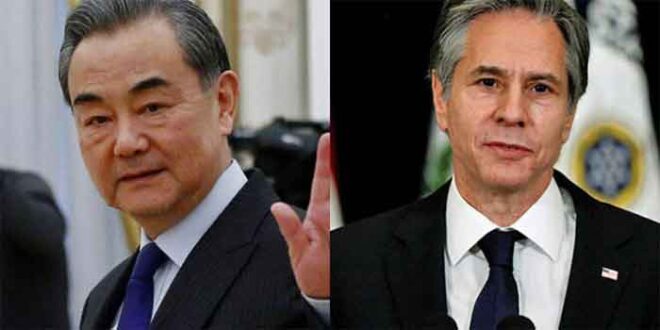 The Biden Administration, in dire straits over Afghanistan, is pursuing China for help. There have been two phone calls to Chinese State Councilor and FM Wang Yi from US Secretary of state Antony Blinken since August 16 alone.

The taciturn readouts from Washington would have us believe that these conversations related exclusively to Afghan developments. But Beijing insists that they devolved upon the China-US bilateral relationship as whole. Beijing copiously shared the details of what transpired!

While Blinken’s first call with Wang on August 16 was described by the State Department as pertaining to “the security situation and our respective efforts to bring U.S. and PRC citizens to safety” from Kabul, the second call on August 29 was “about the importance of the international community holding the Taliban accountable for the public commitments they have made regarding the safe passage and freedom to travel for Afghans and foreign nationals.” (here and here)

Evidently, Washington is in critical need of China’s help but the latter has some preconditions. It is a curious reversal of roles, since linkages are usually typical of the US diplomatic toolbox.

Beijing is taunting Washington that the latter’s entreaty for help is completely unrealistic so long as it pursues patently hostile policies toward China. Indeed, why should China help?

Selective engagement comes easy to the US, historically, dating back to the detente with the former Soviet Union. Unfortunately, post-Soviet Russia also remains open to selective engagement with the US. But the US does not give much importance to Russia, which it regards as bit player.

China is different. China looms large today on the Afghan landscape. So long as the US remained a provider of security to Afghanistan, China benefitted from it indirectly, but that is no longer the case today. Besides, China has reason to be deeply suspicious of the US intentions.

It is an open secret that the defeated ISIS fighters were airlifted from Syria by what is known in local folklore as Daesh Airlines who are today the cutting edge of the ISIS-K. Hamid Karzai himself has spoken about unmarked helicopters under cover of darkness dropping strangers in remote areas. And this when the Afghan airspace was under NATO control!

Blinken’s first call on August 16 aimed at canvassing China’s support to pressure Taliban to “announce a clean break with extremism, opt for an orderly transfer of power and establish an inclusive government… (and) to ensure the safety of all those who wish to leave the country.”

But Wang rebuffed Blinken, pointing out that the present crisis only shows that “mechanically copying an imported foreign model cannot readily be fitted to the use in a country with completely different history, culture and national conditions, and ultimately, is unlikely to establish itself.” In short, the US has no moral or political standing to be prescriptive.

Basically, Wang maintained, it is for Afghanistan to establish an open and inclusive political framework “in accordance with its own national situations.” Plainly put, China can learn to live with the Islamic system that Afghan Taliban will most certainly choose — and, if Taliban dispenses with western-style multi-party democracy, elections, etc. so be it.

Wang suggested that the US should instead focus on playing a constructive role in helping Afghanistan “maintain stability, forestall turbulence and realise peace and reconstruction.” In other words, eschew further interference and instead help in Afghan reconstruction.

Wang came down heavily saying the US should first “remove obstacles to the China-US cooperation on Afghanistan and the international counter-terrorism cooperation” by correcting its “dangerous and wrong” decision to revoke the designation of the East Turkistan Islamic Movement as a terrorist organisation and stop applying “double standards to the counter-terrorism issue.”

He pointedly reminded Blinken that China is one of the veto-holding P5 in the UN Security Council and an important participant “in the contemporary international system.” Therefore, “the US side cannot, on the one hand, deliberately contain and suppress China and undermine China’s legitimate rights and interests, and on the other hand, expect support and cooperation from China, because such logic never exists in international exchanges.”

Blinken apparently assured Wang that the differences between the US and China “can be gradually resolved in a constructive way in the days to come.” He sought US-China cooperation on regional security in a “constructive and pragmatic manner.” read more

The second conversation on August 28 was specific to Chinese support for Washington’s plan at the UN SC to hold the Taliban to ensure safe evacuation out of Afghanistan as well as to guarantee that Afghan territory won’t turn into a safe haven for terrorism.

Wang’s response was that the Afghan situation “has undergone fundamental changes, and it is necessary for all parties to make contact with the Taliban and guide it actively… The United States, in particular, needs to work with the international community to provide Afghanistan with urgently-needed economic, livelihood, and humanitarian assistance, help the new Afghan political structure maintain normal operation of government institutions, maintain social security and stability, curb currency depreciation and inflation, and embark on the journey of peaceful reconstruction at an early date.”

Simply put, China will block any US attempt to use the Security Council to pressure the Taliban. Wang held the US as squarely responsible for the security situation in Afghanistan and suggested that Washington should stop “practicing double standards or fighting terrorism selectively.”

Wang repeated that Beijing will “consider how to engage with the United States based on its attitude toward China.” Interestingly, he brought up Washington’s “Wuhan-virus” campaign against China. read more

Clearly, post-Afghanistan, the US-China relationship is at crossroads. The hard line that the Biden Administration chose on China is no longer sustainable. Beijing estimates that it has weathered the storm. On the contrary, the US is today a much diminished superpower, lacking self-confidence and national unity, and the defeat in Afghanistan has dented its credibility.

To be sure, differences have surfaced within the transatlantic alliance regarding the US’ leadership and this will make things even more difficult for Washington to rally the European allies behind its containment strategy against China. The international perception is that the defeat in Afghanistan signifies the end of the US hegemony.

Arguably, the Afghan crisis will have serious fallouts on the US politics too. The crisis has the potential to damage the Democrats’ prospects to control the Congress after the mid-term poll in 2022, and there is growing doubt whether President Biden would get a second term.

Blinken himself is in a chastened mood lately, compared to the Alaska talks in March where he insisted on speaking to China from a “position of strength.” Gone are the days when Blinken would simple wade into China’s internal affairs and lash out.

During the recent southeast Asian tour, Vice-President Kamala Harris too steered clear of China’s political system or its domestic issues. The US’ need for China’s cooperation and help is going to be the leitmotif of the relationship in the near term.

It is against such a backdrop that Biden’s special envoy John Kerry is visiting China on September 1. Kerry has a wealth of experience on US-China relations and enjoys Biden’s confidence. Blinken slipped into the shoes of his predecessor Mike Pompeo and resorted to megaphone diplomacy, which put Chinese officials’ back up. That is where Kerry’s low-key diplomacy may make a difference. After all, there is a rare congruence of interests between the US and China over Afghanistan, which Wang never denied.

Post Views: 383
Previous A Vengeful American Empire Has Been Humiliated in Afghanistan
Next The breathtaking lack of official accountability in Afghanistan

Why was British ISIS member ‘Jihadi George’ tried in a US court?

“Maritime transport is the backbone of international trade and the global economy. Over 80 percent …