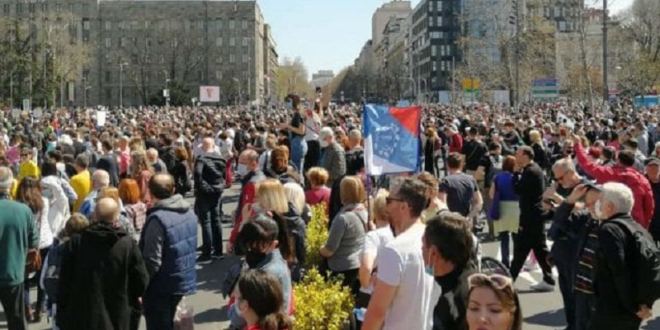 Green Shoots in Serbia a Worry for Ruling Party and Opponents

Never before seen as a priority for impoverished Serb voters, green issues are forcing themselves onto the political agenda ahead of elections expected next year, with repercussions for the ruling party and its longtime opponents.

From protests against small hydropower plants in the south to anger over air pollution made worse by Chinese-run factories in the east and legal challenges to Anglo-Australian mining projects in the west, Serbs – to the surprise of some – are mobilising in defence of the environment.

Why? “Because we didn’t have anything else left,” said Aleksandar Jovanovic Cuta, co-founder of Defend Stara Planina’s Rivers, ORSP, which is leading the fight against the dangers posed by small hydropower plants to rivers on Stara Planina, or Old Mountain, in southeastern Serbia.

“Over the last 30 years they have sold all our riches,” said Jovanovic. “The river we live off, the air we breathe and the land our ancestors left for us are all we have left. For decades, people protested for change and now they are fed up. Environmental protests are the only thing that can get them to fight.”

Now green groups like ORSP want to harness that passion for political change, with talk of OSRP joining forces with two others to contest parliamentary and local elections expected next year.

They threaten to awaken stay-away voters who have long resisted voting for the ruling Serbian Progressive Party, SNS, but see little promise in Serbia’s fractured mainstream opposition either. The SNS hold on the capital, Belgrade, looks particularly fragile.

“The citizens realised that it’s not Kosovo or EU membership that are the most important issues, but those concerning everyday life,” said Robert Kozma of Ne Davimo Beograd [Let’s Not Drown Belgrade], which began as a protest movement against a sprawling Dubai-style development next to the Sava river in Belgrade.

“Do I have clean water to drink? Can I earn a decent wage without being bullied by my employer? Can my children breathe fresh air when I open the window? Those are first-class political issues,” Kozma told BIRN.

After Zagreb… Belgrade?
Following the election of green-left candidate Tomislav Tomasevic as mayor of Zagreb in neighbouring Croatia this year, Belgrade could be the next city to fall to an emerging Green movement, capitalising on widespread anger in the city over air pollution and crumbling infrastructure.

ORSP and Ne Davimo Beograd are mulling a run with a newly-formed green platform called Action, led by Nebojsa Zelenovic, the former mayor of the western Serbian town of Sabac.

For a time, Zelenovic, 46, was the last opposition mayor in Serbia, with a programme widely seen as innovative for Serbian standards given his green policies and efforts to involve ordinary people in decision-making.

He was previously a member of the Democratic Party, DS, which ruled for 12 years after the ouster of late Serbian strongman Slobodan Milosevic in 2000, but has managed to shed the baggage carried by many former DS members because of the way they ran the country.

Zelenovic, whose surname comes from the Serbian word for ‘green’ – ‘zelen’ – says he developed an interest in environmental policies while mayor of Sabac, citing a new wastewater treatment plant as one example.

All aboard the ‘green train’
But while Zelenovic is a relatively recent convert to environmentalism, Ne Davimo Beograd was among the first to force green issues onto the political agenda.

The group formed in opposition to the Belgrade Waterfront project, a controversial riverside development under the SNS, funded mainly by the Serbian taxpayer but fronted by a United Arab Emirates developer.

In the beginning, the movement’s calls for more trees and better urban planning, for the benefit of all, not just the rich, was criticised by some as idealistic, a middle-class privilege out of touch with the reality lived by many of Belgrade’s poorest residents. But it persevered and is now polling at around six per cent in the capital and rising.

In 2019, Ne Davimo Beograd conducted a cost-benefit analysis of a planned waste incinerator plant on the outskirts of Belgrade and – together with the environmental network CEE Bankwatch – filed an official complaint to the European Bank for Reconstruction and Development, EBRD, which is helping to finance the project.

The movement says that the project, outsourced to a French-Japanese consortium, will make Belgrade’s already serious air pollution problem worse and that Belgraders will pay more to incinerate their waste rather than recycle it. The European Investment Bank, EIB, has already pulled out, saying the incinerator would prevent Serbia from achieving its environmental targets as part of its European Union accession process.

“We were always convinced we were on the right track with our values and ideas,” said Kozma. “Now everybody wants to hop onto the ‘green train’, all the politicians who looked at us with arrogance. But the most important thing is that the citizens have also hoped on that train,” Kozma told BIRN.

He said that NDB has been in contact with movements elsewhere in the region, such as ‘Mozemo’ [We can] in Croatia, the party of new Zagreb mayor Tomasevic, and the URA movement that is part of the ruling coalition in Montenegro.

“We will soon become part of the European Green Party and that will legitimise our fight on the continental level,” Kozma said. “Because this is also an international issue.”

‘They had their chance’
Following an election last year that was boycotted by a big part of the opposition, Serbia’s parliament has been left without a single opposition party, lifting the mask on what critics of the SNS say is the authoritarian nature of its rule under President Aleksandar Vucic.

Since the SNS and Vucic came to power in 2012, rights groups say they have turned back the clock on media freedom and democracy in Serbia, while myriad opposition leaders who emerged from the ruins of the DS have refused to make room for new faces.

So while the country is deeply divided over the merits of Vucic’s rule, that does not always translate into votes for opposition parties that have become discredited in the eyes of many voters.

“The citizens are not stupid,” said Zelenovic. “They want new people and they want a clear alternative programme for reforming the country. I think that this new group of green parties and movements offer just that.”

Some in the mainstream opposition have criticised the mooted collaboration of Ne Davimo Beograd, ORSP and Action. Jovanovic was unimpressed.

“They’ve spent 30 years in politics; they had their chance,” he said. “If they had done it properly we wouldn’t have any need to rebel now.”