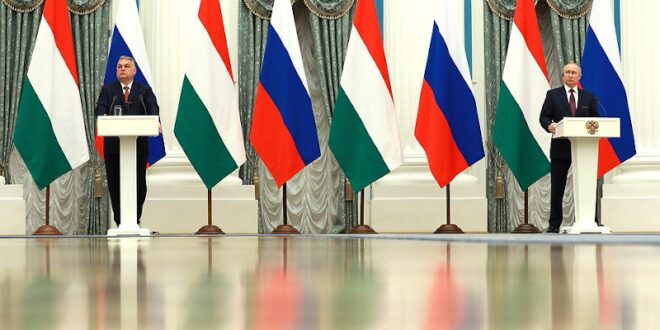 Amid simmering tensions between the West and Russia, after nearly five hours of talks in the Russian capital on Tuesday (1 February), the Hungarian Prime Minister Viktor Orbán blasted the ineffectiveness of the EU’s punitive sanctions on Moscow and hailed his successful relations with Russian President Vladimir Putin.

Described by Orbán as the “most important” meeting in the relations between Budapest and Moscow since he came to power, the Hungarian leader’s self-ascribed “peace mission” culminated in reiterated calls for dialogue and strong support for Hungary’s friendly relations with Russia.

“So the situation is serious. The differences are also significant. Russia’s needs are known to the whole world, and it is clear that the response to them does not meet them”, Orbán told journalists following the talks.

“What we can offer is the Hungarian model,” he said, pointing out that Hungary, an EU and NATO member, has “excellent relations with Russia.”

“It is possible, there are examples of it, Hungary’s of all countries. It is true that this requires mutual respect,” he added.

The Hungarian leader also blasted sanctions the West has slapped on Russia following Moscow’s annexation of Ukraine’s Crimean peninsula in 2014 and the war in Donbas.

“I have to say that the sanctions policy that has been introduced against Russia has done more harm to Hungary than to Russia”, Orbán said after the meeting.

Pointing to Moscow’s domestic substitution of products and Hungary’s loss of market following the sanctions, the head of state called sanctions “a failed instrument in international politics, and I do not consider it to be a useful instrument in the case of Russia or any other country.”

EU sanctions on Russia, which have to be periodically renewed, have so far always managed to receive the unanimity of member states required to stay in place, including Hungary’s vote.

From Russia, with Gas, Jabs and Nuclear

Besides exports and mutual investment, the talks also looked at gas – which, following a 2021 fifteen-year deal with Russia’s Gazprom, is now being delivered to Hungary at a rate of 4.5 billion cubic metres per year via the Serbian-Hungarian interconnector and Austria.

The deal infuriated Ukraine, with Kyiv saying it is “surprised and disappointed” that gas will be arriving in Hungary via a route that bypasses it.

Prior to his trip, Orbán announced he will seek an increase of this volume by 1 billion cubic metres to improve back-up storage.

Putin said he expected the final decision on Orbán’s request to be made at the beginning of April, but said he did not think that the requested increase of 1 billion cubic meters “should be some big problem for us”.

Referring to the decreased storage volumes in Europe, Putin said it “probably will be a problem for our partners in Europe next year as well. Hungary will not have any problems because we will agree on additional volumes.”

Orbán said that certification of Russia’s single-dose vaccine, Sputnik Light, is almost complete, and promised that Hungary will purchase the jab.

Hungary was one of the few EU countries that used Russia’s first COVID vaccine, Sputnik V, in its vaccination drive, despite the product still not having been approved for use by the European Medicines Agency.

“The new Hungarian vaccine factory will be operational by the end of the year. It will be a modular factory. We can produce all kinds of vaccines, and if we can agree, and why wouldn’t we, we will also produce Sputnik Light vaccines,” Orbán said.

The 12th face-to-face meeting of Orbán and Putin was agreed at the end of December, and the parties insisted on the event despite relations between the West and Russia having reached the lowest point since the Cold War.

Since 2010, Orbán has opted to avoid sensitive political issues in his personal meetings with Putin, including in 2014, when Moscow broke the Budapest Memorandum guaranteeing Ukraine’s territorial integrity.

Meanwhile, the Hungarian opposition accused Orbán’s visit to Moscow of being “contrary to national interests” and sending “a message that NATO and EU member states are not united in rejecting Putin’s proposals”.

The Hungarian government has not come out in criticism of Russia’s demands, which would have the alliance defence structures rolled back to their state in 1997 – in turn affecting Budapest as well.

However, NATO sources suggest that Budapest is unlikely to stir the waters.

Hungarians are “nagging a lot” about their ethnic minority issue in Ukraine, but have been warned that the atmosphere is so intense and the extent of a war crisis so large that Budapest can do nothing to stop any NATO initiative, a senior NATO source representing an EU member state in Brussels recently told EURACTIV.

Meanwhile, economic relations between Budapest and Moscow – the backbone of the talks on Tuesday – remain as strong as ever.

The central piece of cooperation is the expansion of the Paks nuclear power plant, built with Rosatom, a Russian state-owned nuclear energy corporation.

The €12.5 billion project, for which the Russian state has provided a €10 billion loan, is currently suffering delays due to hiccups in the certification process. Nevertheless, Budapest hopes it will bring benefits beyond energy diversification and reduction in fossil burning.

Post Views: 193
Previous A simple guide to the Ukraine-Russia crisis: 5 things to know
Next Putin Says If Ukraine Joins NATO Would Be Disaster, Concerns Over Crimea’s Future