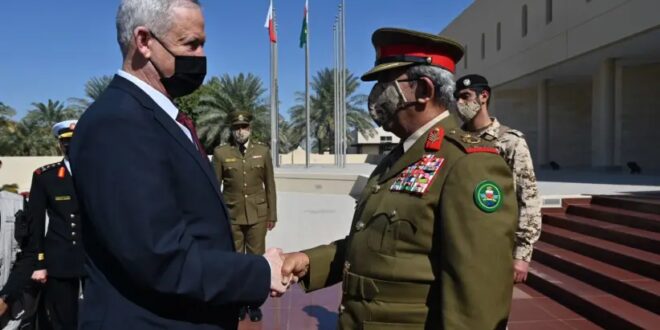 The defense minister is visiting Bahrain where the two countries signed a Memorandum of Understanding.

A mere 200 kilometers away from Iran, Israel’s defense minister Benny Gantz made a clear statement: We are building bridges with your neighbors and we are here to stay.

Gantz was in Bahrain for a whirlwind 24-hour trip to the Persian Gulf kingdom to sign historic military agreements, and to meet with King Hamad bin Isa al-Khalifa as well as the commander of the US Navy’s 5th Fleet.

Though he went from meeting to meeting with barely a moment to himself, Gantz was very pleased with the visit and the results it brought.

The public meetings, a year after the Abraham Accords were signed, come as tensions with the Islamic Republic of Iran are at an all-time high, and missile attacks by their proxies in Yemen and Iraq against the United Arab Emirates have increased.

Bahrain has been of strategic interest to Iran for years. The kingdom has previously seen several large attacks by the terror cells organized by the Islamic Revolutionary Guard Corps and Hezbollah, and continues to face threats posed by Sunni terror groups.

During his visit to the 5th Fleet’s USS Cole that has been deployed to Bahrain, Gantz said that Israel is willing to help defend against such attacks.

“We are willing to help, to take part in joint operational activities, in order to ensure stability and so that our friends can continue to exist and to prosper securely, and we will also be better protected from the different threats facing us,” he said, standing in front of the ship that was the target of a deadly al-Qaeda attack in 2000.

The US chargé d’affaires in Bahrain, Maggie Nardi, also mentioned the attack that killed 17 sailors and injured dozens more.

“I think it is symbolic of the importance that standing together we are much stronger than when we stand alone,” she said. “The fact that we are doing this in front of the USS Cole demonstrates that you might be able to knock us down, but you will not keep us down – and when we are together, we will be a force to be reckoned with.”

Though The Jerusalem Post was told that the Arleigh Burke-class destroyer was not specifically chosen because of its past history, the symbolism is there.

JUST HOURS earlier, troops from US Central Command (CENTCOM) launched a raid in the northwest Syrian village of Atmeh in the rebel-held Idlib province near the border with Turkey, targeting the leader of ISIS, Abu Ibrahim al-Hashimi al-Qurashi, who reportedly blew himself up along with family members and possibly others before the American forces could kill him.

Qurashi became the leader of the terror group after Abu Bakr al-Baghdadi was killed in a similar raid in northwestern Syria in October 2019.

The raid is a clear message that despite the American pivot to Asia and its concerned eyes focused on Russia’s plans for Ukraine, the US is still active in the Middle East. While the Great Power Competition may currently be more concerning to Washington than Iran, Israel knows that the United States will remain its top ally.

But with Washington’s unease surrounding what is currently happening in Moscow and Beijing, Israel has understood that it needs to ramp up ties with other Middle Eastern countries that share common threats like Iran, missile or drone attacks and violent extremism.

The recent attacks against the UAE and ships passing through the Persian Gulf show Israel is not the only one facing the threat of long-range missiles and drone attacks. Interceptor systems, like Israel’s Iron Dome or David’s Sling, might interest Gulf countries that have normalized ties with the Jewish state.

While Islamic State lost its territorial caliphate in 2018, the raid in Syria overnight shows that the threat posed by radical jihadist groups has not disappeared. And with rocket attacks against the UAE and other maritime attacks by Iran and it’s proxies only increasing, Israel has begun to build strategic security ties with the Gulf States and continues to work to normalize ties with others as well.

Those security ties, which will only deepen over the years, will be a strategic necessity should Israel decide to invoke the Begin Doctrine and carry out a preemptive strike against Iran’s nuclear program. Israeli jets will need to use the airspace of not only Saudi Arabia, but also the Gulf countries should it want to strike.

While attacks by terror groups tend to come in waves, the threats posed by Iran and its nuclear program do not. Those threats are only continuing to grow, and as such, so will Israel’s diplomatic and military race to win the hearts and minds of the Gulf.

Post Views: 125
Previous The Future and Past of War and Disease
Next Biden says ISIS leader Quraishi killed in Syria raid