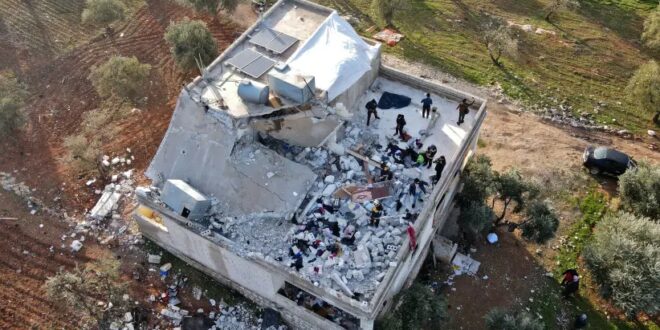 The world is now a “safer place” after the killing of Islamic State leader al-Qurayshi, according to Prime Minister Naftali Bennett.

The leader of Islamic State died in a US Special Forces raid in northern Syria on Thursday when he detonated a bomb that killed him and family members, US President Joe Biden announced.

Abu Ibrahim al-Hashimi al-Quraishi had led the group since the death of its founder, Abu Bakr al-Baghdadi, who was also killed when he detonated explosives during a US raid in 2019.

“Last night, operating on my orders, United States military forces successfully removed a major terrorist threat to the world: the global leader of ISIS,” Biden said at a short speech at the White House. He said ISIS under Quraishi’s direction has executed terrorist operations targeting Americans, allies and partners, and countless civilians in the Middle East, Africa and in South Asia.

“Thanks to the bravery of our troops, this horrible terrorist leader is no more,” said Biden. “Our forces carried out the operation with their signature preparation and precision, and I directed the Department of Defense to take every precaution possible to minimize civilian casualties, knowing that this terrorist had chosen to surround himself with families, including children. We made a choice to pursue a Special Forces raid at a much greater risk than to our own people, rather than targeting him with an airstrike.

“We made this choice to minimize civilian casualties. Our team is still compiling a report, but we do know that as our troops approached to capture the terrorist, in a final act of desperate cowardness, he – with no regard to the lives of his own family or others in the building – chose to blow himself up rather than face justice for the crime he has committed, taking several members of his family with him, just as his predecessor did.”

The president said he was grateful “for the immense courage and skill and determination of our US forces who skillfully executed this incredibly challenging mission. This operation is testament to America’s reach and capability to take out terrorist threats no matter where they try to hide anywhere in the world. We remain vigilant, we remain prepared. Last night’s operation took a major terrorist leader off the battlefield, and has sent a strong message to terrorists around the world: we will come after you and find you.”

Prime Minister Naftali Bennett said the world is a safer place after Quraishi’s death, and congratulated the US and its troops for executing the operation. “We should keep the global fight against terror in a strong and decisive way,” Bennett said in a statement.

Israel was updated on the American activity in Syria prior to Quraishi’s death, KAN News reported on Thursday night.

Quraishi had remained largely in the shadows since succeeding Baghdadi, who led the group at the height of its self-declared caliphate when it controlled swathes of Syria and Iraq and ruled over millions of people.

Since its defeat on the battlefield nearly three years ago, the group has been waging insurgent attacks in Iraq and Syria.

A senior US administration official told Reuters that “at the beginning of the operation, the terrorist target exploded a bomb that killed him and members of his own family, including women and children.”

Pentagon Press Secretary John Kirby described Thursday’s raid as a successful counter-terrorism mission, saying there were no US casualties.

Syrian rescue workers said at least 13 people including six children and four women were killed by clashes and explosions that erupted after the raid began, which targeted a house in the Atmeh area near the Turkish border.

Residents said helicopters landed and heavy gunfire and explosions were heard during the raid that began around midnight. US forces used loudspeakers to warn women and children to leave the area, they said.

A number of jihadist groups with links to al-Qaeda operate in northwestern Syria, the last major bastion of rebels fighting President Bashar Assad in the decade-long Syrian war. Leaders of the Islamic State group have also hidden out in the area.

“The war on terror is not over,” said Jonathan Schanzer, senior vice president at the Foundation for Defense of Democracies. “Its demise was greatly overstated. ISIS was never completely eradicated. Nor was al-Qaeda, for that matter. So now we see the United States involved, yet again, in a profile operation against senior terrorists. It’s also worth noting that this operation took place amidst a purported foreign policy pivot toward China. The region will simply not allow America to make a clean break.

“As for Syria, the worst of the fighting may be over, but the territory itself is shattered. And we see multiple actors, state and non-state, actively operating there. More targets of opportunity will undoubtedly present themselves.”