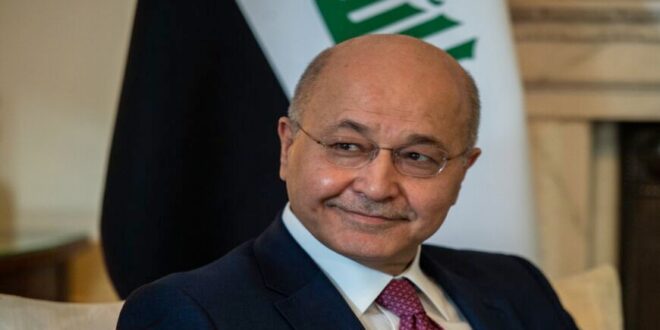 Battle opens for presidency in Iraq

As the Kurdistan Democratic Party nominates Hoshyar Zebari for the presidency, the Patriotic Union of Kurdistan is looking to renew the mandate of President Barham Salih.

Iraqi President Barham Salih confirmed Feb. 1 that he will seek re-election. He has served as president since 2018, and his Patriotic Union of Kurdistan (PUK) party nominated him for a second term.

The PUK’s rival, the Kurdistan Democratic Party (KDP), has nominated the former finance and foreign minister, Hoshyar Zebari, for the post.

Iraq’s parliament has set Feb. 7 as the date to elect the president of the republic amid unprecedented fierce competition between the two major Kurdish parties.

In 2018, the Massoud Barzani-led KDP announced its explicit desire to hold the position of president and then objected to the nomination by the PUK of the current president, Salih, on the grounds that the decline in the influence of the PUK and the shrinking number of its seats in the Iraqi parliament should be reflected in the distribution of positions in the federal government.

The same scenario is unfolding today. Barzani’s party is nominating former Foreign Minister Hoshyar Zebari for the presidency, while the PUK is reiterating its support for Salih. There are also 24 other figures nominated for the same position, most of whom are Kurdish nationalists who will be voted for in the next parliament session.

According to KDP leaders, Zebari’s nomination for the presidency this time around will not be for the purpose of political bargaining — at least for now — and the party will not backtrack on its candidacy in the next parliament session. Observers expected the party to back down in exchange for gains from the PUK within the region or in the event of its acquisition of new areas of influence or a concession in the struggle for the position of the disputed city of Kirkuk between Arabs, Kurds and Turkmen.

Commander of Iran’s Quds Force Esmail Qaani visited Erbil late last month to intermediate between the two Kurdish parties in the hopes of them coming to an agreement on the candidate for the presidency. But the KDP’s Massoud Haidar reiterated the party’s rejection of consensus regarding the presidential candidate and said that “KDP leader Massoud Barzani is the one who has the authority to nominate the president of the republic as the leader who represents the Kurdish political authority and the Kurdish political majority in Erbil and Baghdad.” Haidar expected “the Sadrist movement and the Progress alliance led by parliament speaker Mohammed al-Halbusi to vote for Hoshyar Zebari in the next parliamentary elections, in addition to some other blocs close to the KDP.”

Over the past weeks, a strong alliance emerged between the largest winning blocs in the October 2021 elections, namely the Sadr alliance (73 seats), the Progress alliance led by Halbusi (about 40 seats) and the KDP (about 35 seats). The PUK holds 21 seats. This alliance was able to provide a comfortable majority for Halbusi to win the presidency of parliament in the first parliament session early last month despite objections expressed by the opposition Shiite blocs in the Coordination Framework bloc.

However, the Shiite blocs in the Coordination Framework are trying to preserve the ruling formula that has been ongoing since the first elections in 2005, and they believe that any change — such as depriving the PUK of the presidency post — will naturally lead to other variables at the level of the consensus over the candidacy of the prime minister, a position reserved for the largest parliamentary bloc, according to the Iraqi Constitution.

On the other hand, President Salih seems to be in a pickle for now as far as a second term is concerned. In addition to Barzani’s clinging to Zebari’s candidacy for the presidency, there is a continuing schism within his party (the PUK) given the presence of Kurdish candidates affiliated with the PUK, most notably Latif Rashid, a former minister in the federal government and the brother in law of late President Jalal Talabani. Rashid enjoys the support of the late president’s wife, Hero Talabani, and has good relations with traditional Shiite forces and some neighboring countries.

Article 70 of the Iraqi Constitution details the mechanism for electing the president of the republic as follows: “First: The Council of Representatives shall elect a President of the Republic from among the candidates by a two-thirds majority of the number of its members. Second: If none of the candidates receive the required majority vote, then the two candidates who received the highest number of votes shall compete, and the one who receives the majority of votes in the second election shall be declared President.”

Salih won the presidency in 2018 with 302 out of 329 votes, despite the KDP backing current Iraqi Foreign Minister Fuad Hussein.

In its next session, parliament will most likely hold a runoff between the candidates who obtained the most votes due to the difficulty of having one candidate win a two-thirds majority in the first round of elections. And since the president of the republic is focused on entrusting the candidate of the largest parliamentary bloc with forming the new government, the days leading up to the session of the election of a president will witness intensive talks, especially between the competing Shiite forces — the Sadrists and the Coordination Framework — with the aim of reaching a compromise formula for naming the prime minister. Otherwise, the next session will be similar to the session of the election of Halbusi and held amid much fanfare and withdrawals on the part of the losing parties.