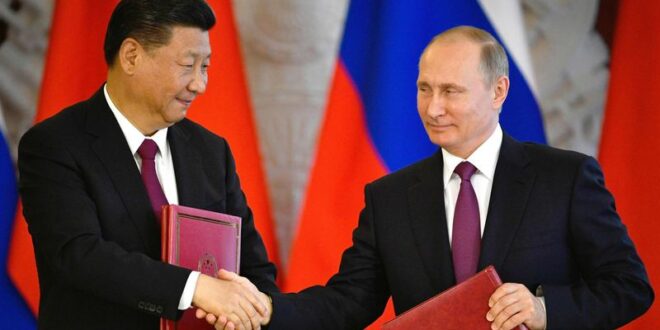 Vladimir Putin has again made it clear: It’s a different time. The post-Cold War days are over. The Empire’s imperialist arbitrary acts are going to be increasingly difficult to carry on.

Putin penned an article for Xinhua, the state-run media of China. It appears ahead of his Beijing visit to join the Winter Olympic, an event of solidarity and friendship, of pursuit of human endeavor to defy limits.

China, to the Russian president, is Russia’s strategic partner – partner on the arena of global politics and global relations, in resolving global and regional issues, in the area of peace, security and trade.

It’s a challenge to the Empire. This is for the first time, since the end of the Cold War, the Empire is facing the challenge. The Empire has not gathered such experience over the last few decades.

There’re days the Empire arbitrarily defined no-fly zones over countries that included Iraq and Libya. There was a time the Empire defied the United Nations. There’re occasions the Empire arbitrarily intervened – bomb and ruin lands, demolish peoples’ peaceful life, and so on, and laughed hilariously. That was a demonic laugh – a laugh while lands were burned and scorched, while statesmen defying the Empire were murdered. But now there’s little chance to continue with that Concorde Fallacy by the Empire.

Putin, in his article, has reiterated that fact – the two countries are coordinating respective foreign policies, working in unison to strengthen the UN so that the global arrangement can play its central role effectively. This move will strengthen, Putin hopes, international legal system.

There’re times the Empire interpreted issues related to international legal system – bomb this country and bring down to pieces that country. It conveniently defined the R2P, the Responsibility to Protect, and its faithful followers in countries raised voices to invoke that R2P. Those were shameless shows in countries, on streets in some countries.

There’re times the Empire defined democracy and autocracy – who to be overthrown and who to be patronized. The Empire went for regime change if a government tried to go beyond the Empire’s orbit; and the Empire blessed a government if that government sheepishly followed its father-figure, the Empire. It was the Empire’s voice as it said: “We, of America, have discovered that we, too, possess the supreme governing capacity not merely to govern ourselves at home, but that great power that in all ages has made the difference between the great and the small nations, the capacity to govern men wherever they are found.” (Elihu Root, US president Theodore Roosevelt’s secretary of state and secretary of war, cited in Karl Berman, Under The Big Stick: Nicaragua and the United States Since 1848, South End Press, Boston, US, 1986)

The act of formulation of definition, and the act of intervention, regime change, etc. seemed the “Divine Right of Kings”, in this case, “of the Empire” – a medieval theory the Empire implemented in modern day. It was like King James I telling in Basilikon Doron: Monarch’s absolute power cannot in any way restrained, and, anyone opposing the monarch in any way is guilty of treason, liable to death, to damnation.

But that absolutist theory was torn into pieces and thrown into the garbage of history: by Cromwell, and again, by the Glorious Revolution of 1688 in England, and by the Republic in France in 1792-3. Those were moments of truth for the absolutists in those lands.

All absolutists had to face their moments of truth. They are to. It’s through opposing power – revolution or not, but opponent force, opposing power. The Empire is going to face its moment of truth. It’s not going to happen overnight, not within weeks and months, but within years.

Whatever the Empire tells isn’t accepted without question now-a-days – a lost credibility. Its propaganda machine is losing credibility, even in its own land.

Now, the reality leads people to question its “democracy” enterprise – organizations and funds it has floated and distributed/is floating and distributing to tout its brand of “democracy”, its slogan of “democracy”, touts it has employed for blustering its brand of “democracy”. This leads people to ask those hawkers of imperialist democracy – who funds you? The real face comes to light the moment the brand names – National Endowment for Democracy (NED), National Democratic Institute for International Affairs (NDI), National Republican Institute for International Affairs (NRI), Center for International Private Enterprise (CIPE), etc. – are uttered by the recipients of funds and other backing including equipment and training. The “glory” and “glamour” is gone.

Putin’s article tells that simple fact: A new era of strategic partnership with China. A significant partnership it is. It’s not easy to brush this out.

The first reason for failure to brush away this partnership: Economy.

The second reason: The Empire’s internal condition – a condition in economy and politics. The Capitol Incident, a fraction of the ruling classes in the land call it “riot”, is an indicator of condition of that politics.

Recent incidents centering Ukraine is an indicator of the Empire’s capacity – to initiate or to walk behind a development. Its tact is alluring Putin to a war.

Putin wrote that Russia and China “play an important stabilizing role in today’s challenging international environment, promoting the democratization of the system of interstate relations to make it more equitable and inclusive.”

For the world, for other countries this – stabilizing role, and promoting the democratization of the system of interstate relations to make it more equitable and inclusive – is important and meaningful. Regarding the stabilization, Syria is the evidence. Evidence is the recent development in a Central Asian country. Russian soldiers, a few thousand, returned home within days from the country after stabilizing situation there; although a leader from the Empire sounded words of caution: Russians don’t get out of your home if you invite them. For countries facing the Empire’s intervention, sanctions, and conspiracy to intervene, this Sino-Russia cooperation is important.

Earlier, Putin said in reply to questions from reporters from China: The Russia-China relationship is based on equality and mutual respect, not ideology – consideration of one another’s interest, freedom from political and ideological circumstances.

There’s neither ambiguity nor hypocrisy in the statement: Not ideology. It’s a very practical statement – a mutually respectful and equal relationship. If it’s a win-win situation, no problem is there. The pattern of transactions, terms of trade, dealings with the Empire, etc. show the real face of the relationship.

The two countries have already taken meaningful moves to de-crown dollar, and to create mechanism to bypass unilateral sanctions. To face the Empire, these are significant moves by China and Russia. Cooperation between these two countries is expanding. The Empire hasn’t faced such situation over the last few decades.

The two countries are cooperating in many areas – from planning set up research station on the Moon to mining, from energy to agriculture, from infrastructure to IT, medicine including Covid-19 vaccines, and organizing “Green Trade Corridors” that bypass sanctions and political and administrative barriers to trade. To capitals in other lands, this is promising and attractive. Here, the Empire’s capacity is facing stiff competition and gradually increasing challenge. It’s a difficult situation for the Empire; and this situation will turn more difficult with passing days as moves by Russia and China are constantly expanding in almost all regions of the world. This situation of competition is really difficult to escape for the Empire.

Therefore, Putin calling China “our strategic partner in the international arena”, calling Russia-China “partnership is sustainable, intrinsically valuable”, “underpinned by respect, regard for each other’s core interests” are significant. Countries including countries in South Asia should consider that the two countries don’t move against each other’s core interests. And, countries know Russia is in good terms both with Iran and Israel – a complicated task. Countries also know that Brazil’s Bolsonaro plans to visit Moscow while the Empire, reports said, is trying to stop its Brazilian friend’s Moscow trip. The situation appears clumsy for the Empire.

Similarly, Putin telling the two countries’ partnership “not affected by political climate and not aimed against anyone”, underpinned by “adherence to international law and the UN Charter”, supporting “an open, transparent and non-discriminatory multilateral trading system based on the rules of the World Trade Organization” are significant for other countries also. Here has a space to move and maneuver for other countries. Putin statement, thus, demands attention.

Post Views: 79
Previous Ukraine Crisis
Next The Russians Are Coming: Are Beijing and Moscow at the Cusp of a Formal Alliance?