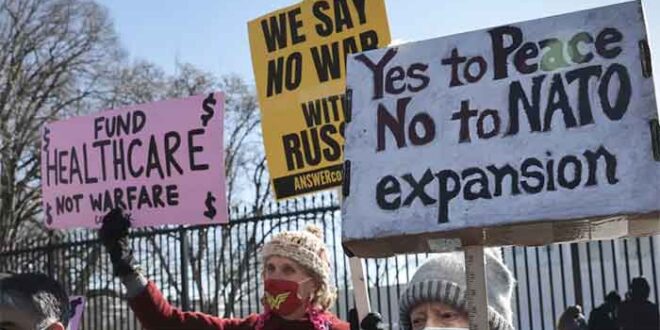 The imminent war in one of the eastern European countries has seen the comeback of the cold war situation between Russia and the United States for the last few weeks. Both countries show no flexibility in their stand on Ukraine, which has been in the grip of severe cold, surrounded by arms and ammunition, and mostly, the uncertain future.

In comparison to US invasions in the Muslim countries, the approach of the West has been altogether different. There was fast and furious military action in the past without giving any heed to appeals for a peaceful resolution. Even, the concerns of the United Nations or the non-European international community were ignored. It was not only the war fought inside the Muslim countries, the leadership was eliminated and the whole population annihilated.

All diplomatic attempts by the UN and other neutral countries to stop the invasion of Iraq or to push forces inside Syria or to enjoy carpet bombings over the mountains of Afghanistan fell to deaf ears. Thus, the global platform of the United Nations was undermined and rendered useless.

Although, the deepening crisis in Ukraine is being seen as an unresolved issue between US and Russia and has placed the whole continent of Europe on tenterhooks that can face anything but war. There was an emergency session called by UN Security Council where US and Russia were involved in a verbal brawl but it has been observed that the military invasions or incursions in the past have now emboldened many other countries to follow the suit.

Ukraine is the second-largest country in Europe. It has got encircled by Russian forces with heavy weaponry, missiles, and war machinery. More than 100,000 Russian troops are currently stationed along the Ukrainian border, whereas 8,500 US troops are ready to encounter them. British troops and fighter jets have been sent already and many other countries in the block have committed to confronting Russia in case of invasion.

Turkey, a close neighbour of both is badly caught up in the backlash between Russia and Ukraine. Ankara has close relations with both countries. Despite being close to Russia, Moscow does not fully trust Turkey and has various reasons to be sceptical.

When Russia occupied the Crimean peninsula of Ukraine in 2014, Turkey vehemently opposed it and called it an attack on the integrity and sovereignty of a country. That was taken seriously by Vladimir Putin and had impacted diplomatic relations for some time.

Moscow seriously doubts Turkey’s loyalty as being a key member of the European defence alliance NATO. Turkey’s defence policy teams up with the European accord, supporting stringent action against those who might adventure any military or political intervention in any European country. NATO has two strong military bases in Turkey.

Last year, Turkey had signed a major defence pact with Ukraine for the supply of Bayraktar TB2 drones, which Russia fears will be used in the Donbas region, where Russian-backed militant groups are fighting against the Ukrainian government.

Turkish President Recep Tayyip Erdogan has recently again offered to play a role of a mediator in resolving the dispute between Ukraine and Russia. As usual, the government in Ukraine has welcomed it but was outrightly rejected by Moscow, saying that ‘there is nothing to mediate’.

For a few years, Russia and Turkey have developed deep political ties as well as billions worth of trade relations. But, according to political observers in Moscow, Turkey has become suspicious of Russian intent at the time it openly intervened militarily in Syria and adopted a policy similar to that pursued by the United States and its allies. Turkey soon expressed its strong reservation regarding the troop’s deployment by both US and Russia, expecting that Moscow would heed to its call of staying away from the confrontation in Syria.

To its displeasure, Russia did not utter a word. That was seen as another stumbling block in the further ties between the two countries but because Putin has been on a mission of winning the Muslim belt back, he did not let diplomatic ties with Turkey get affected.

If there are any skirmishes between Russian and NATO forces while defending Ukraine, Poland, the Czech Republic, and Romania may be the first to have a direct impact. However, the military movements around the Black Sea will have a profound repercussion on Turkey. The trade and transportation services between different Continents might take a big hit.

NATO countries are seen on different pages so far as the situation in Ukraine is concerned. They sound deeply divided internally since the day the former US President Donald Trump dumped the alliance and asked every country to share the cost of every war in the Middle East.

President Joe Biden has been trying to damage the control and regroup NATO countries again under one umbrella which according to defense analysts might take some time for European block to restore the confidence.

The diplomatic relations between US and Russia worsened more when Biden warned Putin to desist from any military adventure in Ukraine. He had said that in response to the attack on Ukraine, Russia would be subjected to “severe economic sanctions” that would be too heavy for Russia to pay.

Meanwhile, US Secretary of State, Antony Blinken was trying to improve the relations through his diplomacy with Moscow with the support of his European counterparts when Biden’s threat thwarted his all efforts. Even, many European countries did not like the tone of Biden and emphasized him to look for a peaceful resolution of the problem.

Putin wants to maintain his influence on Ukraine. He is trying hard to prevent Ukraine from becoming a member of NATO which he sees as a constant threat for Russia. According to Russian experts, NATO has increased its presence and deployment after 2014 which has irked Putin.

After occupying Crimea, Putin wants to gain full control of Ukraine’s Donbas region. He is pursuing a campaign to bring Ukraine back under his control by adopting China’s salami-slicing policy.

NATO’s role has not been as effective as it used to be.

Leaving European Union by Britain has damaged the defense alliance and has never seen any uniformity in its policy since then.

Germany has raised serious concerns about NATO’s future and France is having serious issues about its territorial waters with Britain that have damaged its fishing industry.

Turkey has tried hard to remain silent and almost neutral in the current crisis.

“We are trying to avert the war so that trade activities in the Bosporus are not affected.” said one of the diplomats in Turkey.

Under the Washington Budapest Memorandum of 1994, Ukraine had to dismantle its missile system and nuclear warfare. The country had returned 1900 nuclear bombs to Russia, after which the country’s defense policy has remained weak.

Ukraine lacks its ability to counter Russian aggression. Under the 1994 agreement, the United States and Western nations are said to be committed to defending Ukraine in case of any aggression, but the 2014 incursion by Moscow in Crimea let down Ukraine.

The diplomats are working hard to prevent one more war in Europe because the first causality will be the supply of natural gas to Europe. The economic crumble and the Covid surge have already left a deep scar on the Continent. It would be too hard to protect its population from the harsh conditions that millions of people in Muslim countries are currently going through due to the successive invasions and incursions.

Post Views: 204
Previous US sends another 3,000 troops to Eastern Europe
Next Divine right of the Empire faces challenge as Putin talks about Russia-China partnership