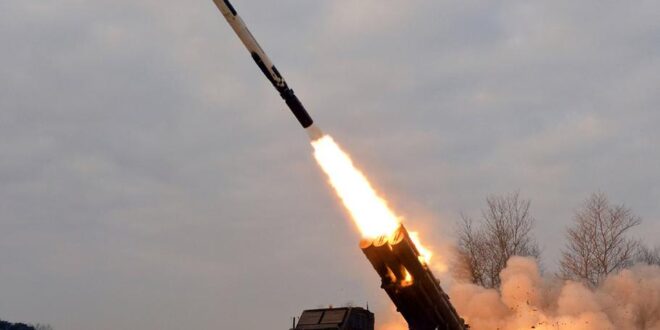 The North Korean Foreign Ministry scorned diplomatic overtures from Washington, D.C., this week and advised it “to halt its military threat to our country.”

The ministry’s Wednesday statement mocked the “so-called ‘diplomatic solution’ and ‘dialogue,’” called for by the United States after a burst of missile tests by North Korea in January. The statement cited the presence of U.S. troops on the Korean Peninsula and their joint military drills with South Korea.

“It is a universal knowledge that the failure of the situation on the Korean Peninsula to easily be out of the whirlwind of aggravated tension just lies in the U.S. hostile policy towards [North Korea],” the ministry’s statement said.

U.S. officials have invited Pyongyang to negotiations without preconditions throughout seven rounds of missile tests by the communist regime so far this year.

The U.S. is concerned about North Korea’s ballistic missile and weapons programs, and imposed further sanctions because of the continuing weapons tests, State Department spokesman Ned Price said Monday. But a door remains open to diplomatic talks, he added.

The U.S. “developed an approach that, at its center, seeks to find a diplomatic means by which to achieve the complete denuclearization of the Korean Peninsula,” Price said at a press briefing.

The White House repeated the message the next day. “The door to diplomacy remains open and we have conveyed that clearly,” spokeswoman Jen Psaki said at a media briefing.

Their comments followed North Korea’s latest test of an intermediate-range ballistic missile capable of reaching the U.S. territory of Guam.

The North fired a Hwasong-12 missile on Sunday, its first launch of that type since 2017, the state-run Korean Central News Agency said. The missile flew about 500 miles at an altitude of 1,240 miles, according to South Korean military officials.

The test was a success, according to KCNA, which called the missile a defensive weapon.

The launch earned a reprimand from South Korean President Moon Jae-in, who has stopped short in recent months of fully criticizing the regime amid ongoing talks to formally end the 1950-53 Korean War.

The U.N. Secretary-General also condemned the missile launch as “a clear violation” of Security Council resolutions.

“It is of great concern that [North Korea] has again disregarded any consideration for international flight or maritime safety,” Farhan Haq, the deputy spokesperson for the Secretary-General, said in a statement Tuesday. “The Secretary-General urges [North Korea] to desist from taking any further counter-productive actions and calls for all parties to seek a peaceful diplomatic solution.”