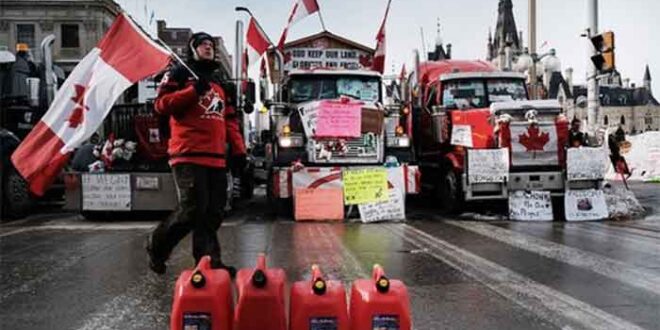 Start at the top: Canada is not free and does not control its own sovereignty as a fully independent country. Much of this is by choice as an offspring of the British Empire.

Canada’s foreign policy is very much in line with U.S. foreign policy, or more broadly it is fully in line with the Anglo-American Five Eyes foreign policy. Canada is part of NATO, an originating member and also is part of NORAD, a U.S. controlled radar/spy system set up in Canada’s north. Militarily Canada works with and advocates alongside the U.S. against Russia, against China, Syria, and Iran, and against the truly independent nations of Latin America like Cuba and Nicaragua, and leads the pack – now defunct fortunately – of the Lima group against Venezuela as well as being a full participant in the subjugation of Haiti.

In spite of its official lies about democracy, peace, and freedom, Canada still sells materials and equipment to the likes of Saudi Arabia. Much more damaging for peace in the Middle East is its full on support of Israel diplomatically, militarily, and for ‘security’ reasons, all the while ignoring the apartheid system and its ongoing ethnic cleansing of the indigenous Palestinian people, ethnic cleansing and apartheid being subjects Canada has first hand experience with.

Canada’s economy is about seventy percent dependent on the U.S. economy, with the North American Free Trade Act effectively opening the borders to the free flow of money for the elite investor class, to the degree that corporations can sue the government for perceived losses while the government cannot sue the corporations for most externalities (e.g. environmental damage, job losses). The recent imbroglio concerning Hua Wei and Meng Wanzhou demonstrated Canada’s complicity in U.S. dual political/economic war with China, showing Canada to be no more than a servant of U.S. wishes.

Canadians often perceive themselves as different in the cultural sphere as well. Sadly, apart from some maple syrup, a few moose, and maybe a good hockey team, Canada’s culture is very similar to that of the U.S., in particular when it comes to consumer life, racism, and a general ignorance of the broader world.

In effect, at best Canada is a follower of the U.S., more correctly it can be called a satrapy, and even more basically although not legally, the fifty-first state of the union. However for the latter it matters little as the Anglo-American empire, the Five Eyes, is pretty much all encompassing. Canada is not a free nation.

Most of the western media world has heard about Canada’s trucker convoy, the “Freedom Convoy” that settled into Ottawa and disrupted the lives of the locals for the better part of two weeks (as of this writing). Ostensibly about objecting to mask mandates and Covid passports used to help control the spread of Covid and its variants, it holds underlying messages that have more to do with racism than any medical issue.

Historically Canada has quickly and militaristically stopped any protest that interferes with the status quo of the nation. Most significantly, these action are applied to indigneous protests concerning land rights, water rights, and on to full sovereign rights of people living on unceded territory and people living within Canada’s apartheid system of reservations. Current exposés of the murder of thousands of indigenous school children under a system that existed up until the end of the Twentieth Century (bringing ‘civililzation’ to the ‘savages’) highlights how brutal Canadian history has been to the indigenous cultures.

Racism is clearly evident in the convoy. First of all are the demographics within the convoy. It is essentially white drivers who are bumping elbows with or high fiving white policemen. As noted in a recent news item, “Over 20 percent of the drivers across Canada and almost 50 per cent of the drivers in BC are South Asian, but we don’t see those demographics represented in the convoy, so we also don’t see their concerns represented.” [1] Their main concerns are wages and safety.

The comparison to be made is that the truckers are white and no real threat to the status quo: the mandates and masks will be gone eventually anyway and life will resume pretty much as it has. For indigenous protests, if they succeeded with their protests, life would not go on the same and the status quo would have to change in order to accommodate the necessary changes to laws and practices that keep the apartheid system in place – creating many changes on the ground vis a vis land rights, resource distribution, and environmental controls.

Another clear sign of racism are the Confederate flags flown, displayed, but more importantly accepted by the truckers parked in Ottawa. If ever their was a symbol of pure racism, along with the Nazi swastika, it is the Confederate flag, a symbol of all that has nothing to do with freedom and everything to do with a white racist society. It has been argued that the flags were a very small minority, but the very tolerance of the flags within the group means they are giving their tacit approval to the racist ideas behind it, both acts exemplifying the white racist privilege of the protest.

A final factor for now concerns the originators of the convoy. There is much to be said about them, but most importantly none of them are truckers, all of them are some kind of political pundit or wannabe from Western Canada. Much of its financial support comes from U.S. sources. [2] Enough said, the convoy is not so much about “freedom” but about some low level politicians wanting to make a statement, a statement that in the end will have overstayed its welcome in Ottawa and in the minds of most Canadians.

Trucker’s have bitten off a bit more than they can digest when they advocate themselves as a “freedom” convoy. The implications of that one word are enormous ranging from its supposed opposite of responsibility, but also including obligation, privilege, on through to totalitarianism, dictatorship, and anarchy.

Fundamentally however, the very small number of truckers, and their basic demographic, does not allow them to speak for anywhere near a majority. Many, arguably most Canadians, while sympathetic to the right to protest, are not sympathetic to the basic argument against masks and mandates, nor are they sympathetic to the trucker’s imposition as a bunch of belligerents on the people of Ottawa. They are not a revolution, not even a movement, but mostly a ragtag group of white guys expressing their anger by taking it out in a public display of wilful defiance to common sense.

A comment on Global News by a trucker expressed that he was protesting to get rid of vaccine mandates, not just for truckers, but also for nurses – incredible as these people are the ones creating a good part of the medical crisis for the nurses by not getting vaccinated nor wearing masks. Are there nurses not wanting to get vaccinated? Certainly, but the vast majority have, and in the meantime they are sweating it out on the front lines, absorbing huge emotional and physical strain, trying to save the lives of those seriously infected – now mostly the unvaccinated.

Most recently, as of this writing, the truckers have organized a group based on a U.S. vigilante group “Freedom of the Land”. They are self proclaiming the right to arrest and detain people and to use force to do so. CSIS, Canada’s equivalent to the FBI/CIA, views the movement as an “extremist threat”. If this goes without a big escalation from the Canadian government, it will be a large political failure and only emphasize the racist nature of the truckers – and contradicts the very nature of freedom. [3]

Freedom does not give a citizen the right to form vigilante groups in order to control others. Freedom goes way beyond the vaccine mandates. Freedom implies an obligation to not damage the lives of others; it implies a responsibility to be proactive in helping others work through adverse conditions – otherwise it is just hedonistic narcissism and not freedom. Freedom and responsibility are complementary.

Freedom in its largest context makes the truckers’ activities and statements pretty much irrelevant on the world stage. The status quo will be maintained regardless of the convoy’s success or lack thereof in eliminating mandates. The oligarchs, the banksters, the militarists, the transnational capitalist class will still rule – and it is those groups that make the world a very unfree place.

Much of the world is in chaos thanks to the powers that be in the ‘western’ world. The truckers’ “Freedom Convoy” is a small event on the global scale in spite of its mainstream and alt-right newsworthiness to distract from the real lack of freedoms. Canadians in particular need to inquire and reflect on their own status as an apartheid state that works with the global hegemon suppressing freedom in many areas of the world.

Freedom requires critical thought, a reflection of a much broader humanitarian view of the world than either the miniscule truckers or the near overwhelming ruling elites care to consider.

Post Views: 100
Previous US steals billions in Afghan bank funds
Next Russia, amid ongoing drills near Ukraine, says ties with US are ‘on the floor’