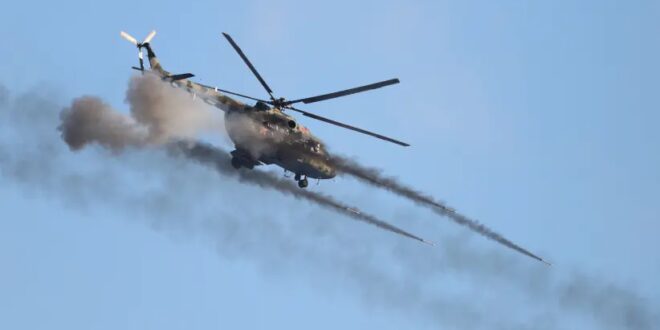 Russia, amid ongoing drills near Ukraine, says ties with US are ‘on the floor’

Russia has more than 100,000 troops massed near Ukraine, has repeatedly denied any plans to invade and has accused the West of “hysteria.”

Russia’s navy held anti-submarine drills in the Black Sea on Monday as fighter jets patrolled its border with ally Belarus in the latest displays of heightened military activity close to Ukraine.

The United States on Sunday said Russia could invade Ukraine at any time and might create a surprise pretext for an attack, as it reaffirmed a pledge to defend “every inch” of NATO territory. Russia has accused the West of hysteria.

The Kremlin acknowledged that Moscow-Washington relations were “on the floor.”

Russia has more than 100,000 troops massed near Ukraine, but has repeatedly denied any plans to invade. It is staging major joint military drills in Belarus, Ukraine’s northern neighbor, and naval drills in the Black Sea, near the Crimean peninsula Moscow annexed from Kyiv in 2014.

Other exercises with more than 30 transport and attack helicopters engaged in tactical exercises were underway in southern Russia, while the air force simulated repelling enemy air strikes in the northern Leningrad region using S-400 surface-to-air missile systems, the military said.

Russia will also send a detachment of ships armed with cruise and supersonic missiles from its Caspian flotilla to the Black and Mediterranean Seas, the Izvestia daily cited military sources as saying.

‘THIS IS OUR TERRITORY’

Russia has said its troops will leave Belarus once exercises are over. Belarusian President Alexander Lukashenko on Monday said the same, but hinted that it would also depend on him and Russian President Vladimir Putin making that decision.

“It will be our decision: this is our territory,” the state-run Belta news agency quoted Lukashenko as saying.

Russian Defence Minister Sergei Shoigu told Putin in televised remarks that some of the country’s military drills had already ended and others were coming to a close.

Washington’s increased military presence in Europe has irked Russia and despite a recent uptick in bilateral dialog, relations remain lamentable.

Kremlin spokesperson Dmitry Peskov said one positive was that Putin and US President Joe Biden, who spoke by phone on Saturday, have been in contact.

“This is a plus because you know that just a couple of years ago there was zero dialog, there were no such contacts whatsoever,” the RIA news agency cited Peskov as saying.

“But on the rest, unfortunately, in bilateral relations one can only talk about negatives. We are at a very, very low point. They are actually lying on the floor.”