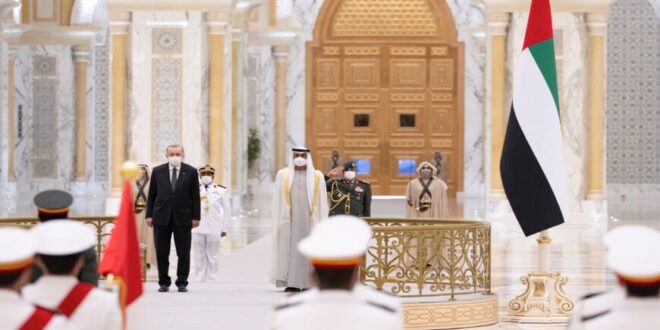 The Turkish president seeks to bolster Turkey’s ties to the Arab world.

Turkish President Recep Tayyip Erdogan arrived in the United Arab Emirates on Monday in a fence-mending visit that is part of Ankara’s broader strategy of ending its regional isolation and drawing Gulf funding to its battered economy.

Erdogan was received by his erstwhile nemesis, Abu Dhabi Crown Prince Mohammed bin Zayed Al Nahyan, amid much pomp. The UAE’s de facto ruler visited Ankara in November, heralding a thaw in relations that has seen both sides shelving years of incendiary rhetoric against the other. The leaders signed 12 commercial, cultural and defense accords. On Tuesday, Erdogan will travel to Dubai to visit the Turkish pavilion at Expo 2020 Dubai.

Erdogan set the tone ahead of the visit, telling reporters, “During this visit, we aim to develop the momentum we have harnessed with the United Arab Emirates and to take all necessary steps for relations to revert to the level they merit.”

“Dialogue and cooperation between Turkey and the United Arab Emirates carries great significance for peace and stability in our entire region,” Erdogan added.

The warm feelings emitting from the UAE were on full display as the world’s tallest building, the Burj Khalifa in Dubai, lit up in the crimson colors of the Turkish flag, along with the words “Hos Geldiniz” (Turkish for “Welcome”).

Anwar Gargash, the UAE’s influential former foreign minister and adviser to the UAE president, tweeted, “President Recep Tayyip Erdogan’s visit to the UAE…opens a new positive page in the bilateral relations between the two countries, and is in line with the UAE’s directions towards strengthening bridges of communication and cooperation aimed at stability and prosperity in the region.” Less than two years ago, in a 2020 interview with Germany’s Die Welt, Gargash had called for Europe to forge a common front against Erdogan’s efforts “to revive the Ottoman Empire.”

YouTube videos from Turkish mobster turned whistleblower Sedat Peker alleging massive criminal activity by the Erdogan government and its business cronies, broadcast from Peker’s refuge in the Emirates, were halted along with his tweets in a further gesture to Turkey.

The big question is whether the UAE will now hand him over to Turkish authorities, where he faces a host of charges.

The UAE has earmarked $10 billion for investment in Turkey as other foreign stakeholders pull out of the Turkish market. With the volume of trade close to $8 billion annually, the UAE is among Turkey’s top trading partners and the 10th largest overseas market for Turkish contractors, Erdogan said.

The sea change that has unfolded over the past few months comes after years of hostility that has seen Turkey and the UAE on opposite sides of almost every regional conflict, most notably Libya. This began with the start of the Arab Spring uprisings in 2011, as Erdogan and his pro-Muslim Brotherhood Justice and Development Party (AKP) together with the UAE’s longtime bugbear, Qatar, embraced Sunni Islamist opposition groups seen as threatening to the other Gulf monarchies.

The antagonism peaked in 2016 when Turkey accused the UAE of bankrolling the failed coup to bloodily overthrow Erdogan and persisted as Turkey backed Qatar in its dispute with the Gulf Cooperation Council countries and as the UAE forged closer ties with Greece and Cyprus, backing them in their energy-sharing dispute with Ankara in the Eastern Mediterranean.

Ali Babacan, a former economy minister and founding member of the AKP who broke off to form his own party, was quick to seize on the apparent contradiction: “Mr. Erdogan just said that we are starting a new era with the UAE. If the UAE is behind the bloodiest night in our recent past, how does he reach out to them so easily. If he misled our people on this matter, is he going to apologize?”

The detente is welcome news for the EU and NATO as it signals a de-escalation of tensions in its backyard. It’s less so for Syria’s Kurds, who until recently benefitted from Emirati largesse when the latter and Saudi Arabia sought to curb Turkish influence there.

Erdogan, who threatened to sever ties with Abu Dhabi over the Abraham Accords, has since been seeking to repair ties with Israel. Israel’s president, Isaac Herzog, is expected to pay an official visit to Turkey next month. Erdogan has also been courting Saudi Arabia after having aggressively publicized Crown Prince Mohammed bin Salman’s role in the murder of journalist Jamal Khashoggi in Istanbul, thrusting relations with the kingdom into a tailspin.

On the same day that Erdogan traveled to the UAE, Israeli Prime Minister Naftali Bennett flew to Bahrain. It’s the first-ever visit by an Israeli premier to the Gulf state, where Eitan Na’eh, the Israeli ambassador who was kicked out of Ankara, is now the ambassador for the Jewish state.

The conventional wisdom, broadly, is that the olive branches flying across the region stem from the realization that the United States, with its energy focused on Russia and China, can no longer be counted on to nanny friendly regimes in the Middle East.

“The Turkish-UAE rapprochement is viewed as further assurance that Ankara is serious in its current overtures also toward Israel,” noted Gallia Lindenstrauss, a senior research fellow at the Institute for National Security Studies in Tel Aviv who specializes in Turkish foreign policy. “Still, it is questioned how this warming of relations between Turkey and the UAE, and even the use of the term ‘strategic’ with regard to this thaw in relations, fits in with the very close relations between Turkey and Qatar,” Lindenstrauss added. For now, there is little evidence that Qatar feels threatened, and its flagship Al Jazeera news outlet has been noticeably neutral in its coverage of the story.

Another driver is the shared threat posed to both Turkey and the UAE by Iran in Iraq and Yemen, respectively.

Jalel Harchaoui, a researcher specializing in Libya, noted that the effects of Turkish-UAE rapprochement are already being felt in Libya. “Ankara is obviously not eager to see its influence recede, but the reasoning at this juncture is that Ankara is prepared to make small concessions and accept a slightly messier reality in Libya and Syria as along as Turkish efforts are somewhat reciprocated,” Harchaoui told Al-Monitor.

“In all cases, neither capital is interested in full-blown war like we saw in 2019 and 2020 in some theaters. And in territories where there is brutal war currently ongoing, like Ethiopia, Turkey and the UAE happen to be supporting the same faction militarily,” Harchaoui added.