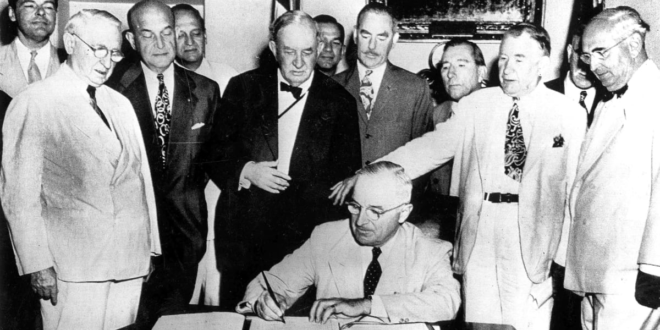 What Is NATO’s Article 5?

The article, as the cornerstone of a treaty signed in 1949, establishes solidarity among member states and has been invoked only once.

Article 5 is the cornerstone of the North Atlantic Treaty Organization (NATO) and states that an attack on one member of NATO is an attack on all of its members. Despite its importance, NATO has only invoked Article 5 once in its history—in response to the terrorist attacks of September 11, 2001.

NATO and Article 5 were established in 1949 in the aftermath of World War II when Communist movements supported by the Soviet Union posed a serious threat to democratically elected governments all over a devastated Europe. In 1948, the Communist Party of Czechoslovakia overthrew that nation’s democratic government, while in Germany, Soviet authorities blockaded the Allied-controlled section of Berlin in an attempt to strengthen their position there.

The Berlin Airlift, when U.S. and British planes carried food, fuel and other vital supplies to the isolated citizens of West Berlin, marked an early victory for the West in the Cold War. And with the launch of the Marshall Plan, which provided economic aid to the war-ravaged countries of Europe, the United States had decisively abandoned its earlier policy of isolationism.

But at such a vulnerable time, it seemed clear that Europe required not just economic aid, but also military support, in order to counterbalance the power of the Soviet Union, prevent the revival of nationalist military movements (such as Nazism) and allow for political development along democratic lines.

Tensions between the United States and the Soviet Union resulted in the formation of key alliances that would endure throughout the Cold War.

“Men with courage and vision can still determine their own destiny,” President Harry S. Truman declared at the signing ceremony. “They can choose slavery or freedom—war or peace…If there is anything certain today, if there is anything inevitable in the future, it is the will of the people of the world for freedom and for peace.”

Article 5 Text: ‘An Attack Against One…’

The treaty’s key provision was Article 5, which began: “The Parties agree that an armed attack against one or more of them in Europe or North America shall be considered an attack against them all…” While this commitment to collective defense lay at the heart of NATO, it was left to the judgment of each member state to decide how exactly it would contribute.

Following the collapse of the Soviet Union in 1991, NATO opened its door to include former Warsaw Pact states (the Czech Republic, Hungary, and Poland) and ex-Soviet republics (Bulgaria, Estonia, Latvia, Lithuania, Romania, Slovakia, and Slovenia). The alliance also broadened its role. Member states sent peacekeepers to Bosnia in the 1990s and carried out bombings in Serbia in 1999 in defense of Kosovo. Several former Soviet republics, including those in the Baltic region, began joining the NATO alliance.

On September 12, 2001, the day after the terrorist attacks at the World Trade Center and Pentagon, NATO invoked Article 5 for the first time in its history, committing its members to stand by the United States in its response to the attacks. In a four-paragraph resolution that passed unanimously, the organization reflected its understanding that the threats to global security had changed radically in the 52 years since the alliance was founded.

On October 2, 2001, NATO Secretary-General Lord Robertson held a press conference to discuss the events of September 11, and pledged support of the 18 NATO allies in the campaign against international terrorism.

”The commitment to collective self-defense embodied in the Washington Treaty was entered into in circumstances very different from those that exist now,” the statement read. “But it remains no less valid and no less essential today, in a world subject to the scourge of international terrorism.”

In addition to participation in the war in Afghanistan, NATO’s response to the 9/11 attacks under Article 5 included Operation Eagle Assist, in which NATO aircraft helped patrol the skies over the United States for seven months between 2001 and 2002, and Operation Active Endeavour, in which NATO naval forces were sent to perform counterterrorism activities in the Eastern Mediterranean. Operation Active Endeavour, which began in October 2001 and later expanded to the entire Mediterranean region, didn’t conclude until 2016.

NATO has taken collective defensive measures in other situations, including deploying missiles on the border of Turkey and Syria in 2012. Russia’s annexation of Crimea in 2014 and the rise of ISIS in recent years led the organization to implement a huge increase in its collective defenses, including tripling the size of the NATO Response Force.

In 2014, NATO member states agreed to try and spend 2 percent of their GDPs on defense, although most member states fail to meet this non-binding goal.

President Trump was critical of NATO, calling it “obsolete” in a 2017 interview and criticizing other NATO members for not spending enough on defense. But he also affirmed U.S. commitment to Article 5 in June 2017, during a news conference with the president of Romania: “I’m committing the United States to Article 5, and certainly we are there to protect, and certainly that’s one of the reasons that I want people to make sure we have a very, very strong force by paying the kind of money necessary to have that force.”