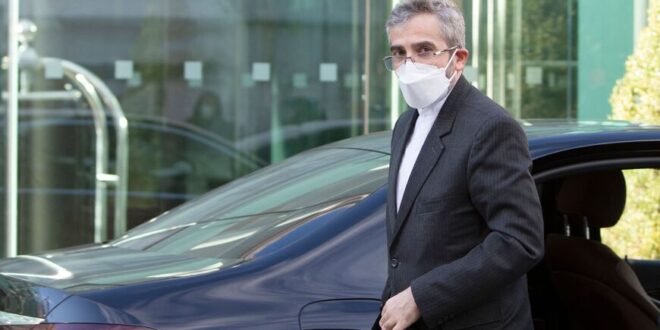 Iranian Foreign Minister Hossein Amir-Abdollahian called on the West to stop “playing with time” in Vienna.

Iran called for the quick resurrection of the landmark nuclear deal in Vienna, accusing the United States and other Western powers of “playing with time” and failing to make necessary concessions.

“If an agreement is reached in Vienna today and sanctions are lifted, it would be better for Iran if this happens tomorrow,” Iranian Foreign Minister Hossein Amir-Abdollahian said in a news conference. “Tehran is in a hurry to reach agreement in Vienna, but this should be within the framework of our national interest,” he said Monday, according to Iran’s semi-official ISNA.

Why it matters: As Amir-Abdollahian called for a swift resolution, the irony was not lost on some observers who pointed out that Iran forced a five-month pause in the talks following the election of hard-line Iranian President Ebrahim Raisi in June. When talks did resume in late November, Iran’s negotiating team reportedly came to the table with fresh demands.

The United States and Iran are now conducting an eighth and possibly final round of indirect talks aimed at salvaging the nuclear deal. The 2015 Joint Comprehensive Plan of Action set curbs on the country’s nuclear program in exchange for sanctions relief.

The latest: The Biden administration said last week that a deal was “in sight” but that one must be reached in the coming weeks or Iran’s nuclear advances will render the original deal meaningless. On Sunday, Russia’s representative to the talks, Mikhail Ulyanov, tweeted that “significant progress has been made” in Vienna.

But Secretary of Iran’s Supreme National Security Council Ali Shamkhani struck a decidedly pessimistic tone, tweeting that Western negotiators were only “pretending” to take the initiative in the Austrian capital.

“A US political decision to accept the deal or refrain from accepting the requirements of a credible and lasting agreement based on the principles accepted in the nuclear agreement can replace speculation,” Shamkhani said Monday.

In other diplomatic traffic, Israeli Prime Minister Naftali Bennett flew to Bahrain, which shares Israel’s deep distrust of Iran, on Monday. Bennett’s visit marked the first by an Israeli head of government to Bahrain.

Post Views: 235
Previous If Israel strikes Iran, what happens next?
Next Jordanians turn to cryptocurrency despite ban