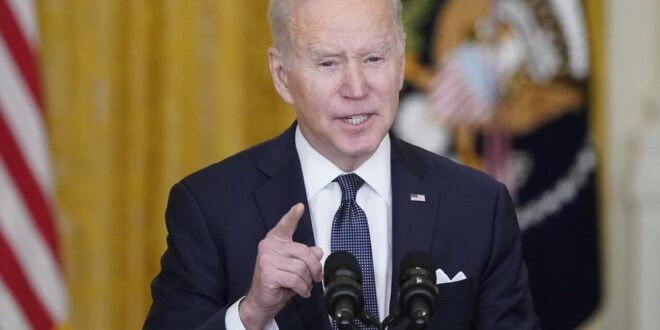 President Joe Biden said Tuesday that the threat of a Russian invasion of Ukraine remains despite claims from Russian officials that they prefer a diplomatic resolution to the ongoing tensions in Eastern Europe.

Biden said he would welcome continued diplomatic talks, though military analysts “indicate that [Russian forces] remain very much in a threatening position.”

“Yesterday, the Russian government publicly proposed to continue the diplomacy,” the president said during a public address from the White House. “I agree. We should give the diplomacy every chance to succeed, and I believe there are real ways to address our respective security concerns.”

Biden’s comments came after the Russian Foreign Ministry announced it began moving troops away from the Ukraine border and sending some of them back to their bases after completing military exercises. It was the first time that Russia has mentioned withdrawing any troops since the start of amassing them around Ukraine. Details about the number of Russia troops repositioning were not provided.

“As the combat training measures are completed, the troops, as always, will make marches in a combined way to the points of permanent deployment,” the ministry said in a statement. “The units of the Southern and Western military districts, having completed their tasks, have already begun loading onto rail and road transport and will begin moving to their military garrisons today.”

However, the U.S. has not been able independently verify the removal of any Russian troops from the border, Biden said.

“The Russian defense minister reported today that some military units are leaving their positions near Ukraine. That would be good, but we have not yet verified that,” he said. “The fact remains right now Russia has more than 150,000 troops circling Ukraine.”

“On Russian statements regarding withdrawal of some forces from the Ukrainian border, we in Ukraine have a rule: We don’t believe what we hear, we believe what we see,” Kuleba wrote. “If a real withdrawal follows these statements, we will believe in the beginning of a real de-escalation.”

Biden’s address from the White House follows weeks of officials from the U.S. and other NATO countries engaging in diplomatic talks with Russia. At the same time, Russia continued to amass more than 100,000 troops along Ukraine’s northern and eastern borders with Belarus and Russia, respectively.

The U.S. proposes new arms control, transparency and “strategic stability” measures in talks with Russia but refuses to bend to Russia’s main concern that Ukraine be banned from future membership in NATO, Biden said.

“Nations have a right to sovereignty and territorial integrity and the freedom to set their own course and choose with whom they will associate,” he said. “But that still leaves plenty of room for diplomacy and for de-escalation.”

Ukraine has a right to make its own security agreements and decisions, NATO has said.

Biden said the U.S. and NATO “are not a threat to Russia” and reiterated he would not send troops into Ukraine to fight the Russians.

“Ukraine is not threatening Russia. Neither the U.S. nor NATO have missiles in Ukraine. We do not have plans to put them there,” he said. “To the citizens of Russia, you are not our enemy. And I do not believe you want a bloody, destructive war against Ukraine.”

Still, Biden said the U.S. and its NATO allies will “respond decisively” should Russia invade Ukraine.

“If Russia attacks Ukraine, it’ll be met with overwhelming international condemnation,” he said. “The world will not forget [it if] Russia [chooses] needless death and destruction. Invading Ukraine will prove to be a self-inflicted wound.”

The president also warned Russia will face consequences should it target U.S. citizens physically or through cyberspace, noting the U.S. and its NATO allies have been sharpening their defense against cyber threats.

“I’ve been clear that if Russia targets Americans in Ukraine, we will respond forcefully,” Biden said. “If Russia attacks the United States or our allies through asymmetric means, like disruptive cyberattacks against our companies or critical infrastructure, we’re prepared to respond.”

Top U.S. officials have been engaging with Russian leaders increasingly during the past week as the possibility of a Russian invasion increased. European media has reported Russian President Vladimir Putin intended to cross the border into Ukraine on Wednesday, prompting Ukrainian President Volodymyr Zelenskyy on Monday to declare the date as a national “Day of Unity.”

“Secretary Blinken reiterated our ongoing concerns that Russia has the capacity to launch an invasion of Ukraine at any moment and emphasized the need to see verifiable, credible, meaningful de-escalation,” the State Department said in a statement.

The U.S. on Monday closed its embassy in the Ukrainian capital of Kyiv as threats of a possible Russian invasion loomed.

On Friday, National Security Adviser Jake Sullivan said Americans in Ukraine should leave the country immediately as the risk of a Russian invasion had risen.

“The threat is now immediate enough that this is what prudence demands,” he said during a White House briefing. “If you stay [in Ukraine], you are assuming risk with no guarantee that there will be any other opportunity to leave and there is no prospect of a U.S. military evacuation in the event of a Russian invasion.”

Biden again warned Tuesday that “all Americans in Ukraine leave now before it’s too late to leave safely.”

In addition to diplomatic talks, Biden has sent 5,000 troops from the 18th Airborne Corps in the U.S. to Europe as the situation unfolds. About 4,700 of them are either in or going to Poland, which borders Ukraine to the west, while another 300 have set up a joint task force headquarters in Germany.

The 4,700 troops are joining the approximately 4,000 U.S. service members who were already in Poland on a regular rotational basis.

Additionally, the U.S. in the past two weeks has moved 1,000 troops from the Army’s 2nd Cavalry in Germany to Romania to augment the 900 troops who were already deployed there on a rotational basis.

Poland and Romania are among four NATO countries – along with Slovakia and Hungary — that border Ukraine.