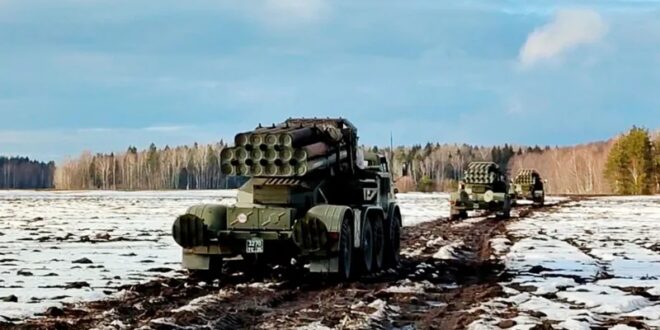 A Russian Ministry of Defence spokesman has announced that Russia will begin withdrawing troops from the Ukraine border saying these units have completed their military training exercises in the region.

“Units of the southern and western military districts, having completed their tasks, have already begun loading onto rail and road transport and today they will begin moving to their military garrisons,” -chief spokesman, Igor Konashenkov.

On Monday the Biden administration warned that Russian troops were ready to launch an invasion as early as Wednesday the 16th of February, “We are in the window where an invasion could happen at any time,” said White House deputy press secretary Karine Jean-Pierre. “It could begin this week.”

Pentagon Spokesman John Kirby carried this imminent invasion prediction forward as well saying to reporters, “I won’t get into a specific date, I don’t think that would be smart. I would just tell you that it is entirely possible that he could move with little to no warning.”

White House national security adviser Jake Sullivan had said last week that Russia may not wait for the Winter Olympics in China to end on Feb. 20 before invading. Reversing the previous speculation that Russia would hold off on an invasion to allow Chinese President Xi Jinping to glean the maximum propaganda benefit from the Winter Olympics being held in that country.

In the past week, the U.S. has talked up the threat of imminent invasion of Ukraine while its response to that invasion has been very limited in scale: evacuating or repositioning diplomatic personnel, advising Americans to leave Ukraine, and sending a few thousand troops to NATO countries and some weapons to Ukraine. The very limited response seemed at odds with the rhetoric coming from the White House that a major war was about to break out in Europe.

In Ukraine, western media reports of an imminent invasion appeared to have created near panic in the country prompting some Ukrainian business leaders and even politicians to leave the country. President Volodymyr Zelenskiy appealed to the U.S. and NATO to tone down the imminent invasion talk because of the threat it posed to Ukraine’s economy and the prospect of millions of Ukrainians leaving their homes and fleeing to the borders of NATO countries like Poland, Hungary and Romania creating a refugee crisis.

Ukraine’s own reaction to 130,000 Russian troops on its borders was also very limited, it did not mobilize its army and call up its estimated 900,000 thousand reservists to position near its borders or begin laying up the supplies of food, water, and medicine that it would need for its civilian population if an invasion were to occur.

SOFREP was all but alone among media outlets in predicting an imminent invasion was likely, citing reasons related to sound military doctrine like the harsh winter weather, the relatively low number of Russian forces committed to an invasion of a country as large as Ukraine, and the seeming absence of pre-invasion markers like large fuel and ammo dumps and field hospitals. We also pointed out that the demands made by Putin were not issued as ultimatums but were rather broad giving Putin(and the West) plenty of room to negotiate a settlement that both sides could claim a victory on.

We also reasoned that the White House stoking imminent invasion fears was a tactic to head off a further escalation by Putin while positioning the White House to be able to claim that President Biden’s deft diplomacy had saved Ukraine and Europe from war.

It is also possible that U.S. and Western intelligence agencies totally misread what was coming out of Russia and took Putin’s bluffing and posturing as a real threat of invasion. This is not entirely implausible since the rapid conquest of Afghanistan by the Taliban last year came as a complete surprise to our own intelligence agencies and the State Department, while we had assets in the country able to make on-the-ground assessments of the situation in real-time.

We are prepared to be charitable to U.S. intelligence agencies in this scenario because if the U.S. really did believe that such an invasion was truly days away, we would have seen imagery of Russian armored formations moving closer to the border and their jumping-off points and the U.S. would have likely imposed the “harsh” economic sanctions it promised against Russia should it invade. Additionally, in an actual imminent invasion scenario just a day or so away, we would have expected to see NATO go to Amber alert status.

NATO for its part said yesterday that events were turning more to diplomacy and away from military aggression. Speaking to reporters in Europe yesterday, NATO Secretary General Jens Stoltenberg said,

“There are signs from Moscow that diplomacy should continue. This gives grounds for cautious optimism.”

So why would Putin pull back now? We think there are several factors. First, in the long term, it is not sustainable for Russia to keep troops in the field for months in winter weather living in tents. Even though Russians are acclimated to winter conditions their troops are still living outside in sub-zero temperatures every day and this degrades combat efficiency day by day. Knowing this, Biden and Western countries have been playing for time, keeping Russian units in the field longer adding to their misery. Third, it is enormously expensive for Russia to keep these units in place in terms of fuel, food, and pay for the troops. And Russia is not a wealthy country anymore. Finally, Putin probably expected that President Biden and NATO would cave into his demands quickly, and decided to withdraw because he did not have the number needed to invade successfully and could not maintain the pretext of them being there for military exercises forever.

The White House predicting the invasion would begin on the 16th of February gave Putin an opportunity for a face-saving withdrawal of Russian troops while claiming that U.S. and NATO fears of an invasion were overblown.