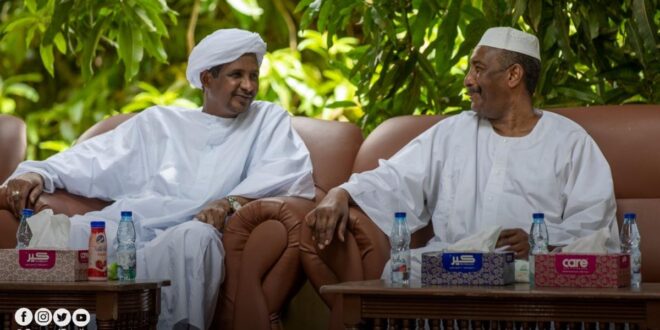 One would think that Russia was busy with other matters, but on February 20, 2022 – at the height of the Ukraine Crisis – the Sudanese Foreign Ministry announced that the Vice Chairman of Sudan’s Transitional Sovereignty Council, Lieutenant General Muhammad Hamdan Dagalo “Hemedti” would travel to Moscow at the end of the week and meet with Russian President Vladimir Putin and Foreign Minister Lavrov.[1] It is the first visit by a senior Sudanese official to Russia since the October 25, 2021 military coup in Sudan which removed the civilian part of the Sudanese government under Prime Minister Abdullah Hamdok.

Not surprisingly, given tensions with the West over Ukraine, Russia has been busy reaching out to old and new friends worldwide, from Havana to Beijing. Sudan today is a relatively “new” friend to Moscow in the sense that Russia, along with Egypt, were the most blatant open supporters of the military coup in Sudan. Russia has had military advisors on the ground in Sudan since the last years of the Bashir regime.[2] Some of these advisors trained Hemedti’s own forces.[3]

Hemedti’s trip tells us some things about Sudan. First of all, Hemedti continues to feel confident enough about the situation at home to travel (it is not his first trip outside Sudan since his rise to power in 2019, although most of those were in Africa and the Middle East. Hemedti reportedly visited Russia in 2019). He is not overly concerned about any rivals in the Sudanese Armed Forces (SAF) or elsewhere in the regime moving against him.

Secondly, the paradoxical consequences of the October coup are that this particular crop of generals has more power than ever before but are also largely isolated within Sudan itself. What actual support the regime has, outside military institutions, is limited to some of the Darfur rebel groups and to civilian remnants of the Islamist Bashir regime. It is a regime with tremendous coercive power in terms of repression, but little ability to actually govern. It is, to use a Russian term, a government of siloviki, of rule by and for the military institution.[4] It seems to be a military regime weaker than past Sudanese military dictatorships. One other difference with previous Sudanese military regimes is Hemedti himself, the regime’s strongman, who is from outside the usual tribal and demographic sources of power, a Darfuri Arab heading what were once wild paramilitaries turned into a Praetorian Guard by the Bashir regime.[5] Amidst the tragedy of dashed hopes and brutal repression in Sudan, Hemedti’s rise is a remarkable testimony of his ruthless will to power.

Hemedti’s Rapid Support Forces (RSF) have also functioned to a certain extent like Russia’s own Wagner Group, mercenary guns for hire, combining both killing and profit.[6] The Sudan of today’s generals now resembles the type of African states that Moscow has been backing in recent years – coup-plotting military kleptocracies and failed, if often resource rich, states: Central African Republic, Mali, Burkina Faso, Guinea. One of the Burhan/Hemedti regime’s dubious accomplishments is “graduating” the country from a darling of the IMF/World Bank that had real prospects of debt forgiveness and economic growth to another outlaw regime able to repress enough to maintain power but not capable enough to govern.

What can Russia offer Hemedti, aside from a personal and financial safe haven? Russia is not China, a builder of great projects and economic networks. Nor is it the United States, which still holds the keys to access to the international financial systems and its lending institutions. Russia can offer Hemedti two things: support and advice in internal political maneuvering (the regime needs to “divide and conquer” the opposition and come up with a minimally plausible civilian puppet government now and after whatever transitional political process the military allows). And secondly, an international version of the same; support in maneuvering in a partially hostile global stage. Moscow is a past master in playing the role of both arsonist and fireman, in stoking conflicts and then being helpful to manage them (admittedly the Sudanese themselves under Bashir and others did the same quite well on their own).

Moscow can also be helpful in the world of “living well and surviving while America is your adversary,” in hiding money and finding creative ways to uncover new income, in looking for friends and insulating yourself from potential damage from Western adversaries. Again, this is something Hemedti, the RSF and its business empire have done rather well on their own to this date.[7] Hemedti has already channeled the language used by the rulers of Belarus, Syria, Turkey, and Cuba in threatening to unleash new waves of desperate migrants seeking to break into Europe.

Moscow’s support comes with low political and economic costs to Russia, with the possibility of gaining still another African satellite, this one with prime access to the Red Sea, one of supposed six countries on the African continent which may eventually contain a Russian base (before the October 25 coup, Sudan had distanced itself from the idea).[8] The old Soviet Union had close military allies in Africa back in the day and also had naval access to nearby South Yemen (both Aden and Socotra).[9]

The ruling Sudanese military ostensibly is still committed to elections and a democratic transition but the goal is clearly to hold on to as much power as possible, dumping the responsibility of dealing with difficult economic and social files on a civilian government that leaves military privileges and immunity intact. This is an outcome both Russia and Egypt would also like to see in Sudan.[10] So far, the military has been an abject failure in fashioning a suitable civilian façade but it clings ferociously to power. Washington is hesitant to press the Sudanese military too far seemingly in fear of chaos and of driving them closer to Moscow.[11]

With an effective internal game in dividing and conquering and a strategic marshalling of international allies, the military regime can gain what it needs most – time. Time enough to endure and repress while fashioning a transitional process without democratic teeth as a weak and easily fooled international community is distracted by the next regional crisis. While the heroic Sudanese people sacrificing their lives in opposition to military rule are not fooled, the international community seems to be asking to be beguiled as other crises beckon. As one Sudanese opposed to the military dictatorship told me recently, “America has not done much to punish the coup plotters, and is now distracted by the big blonde in Ukraine. We are forgotten.”