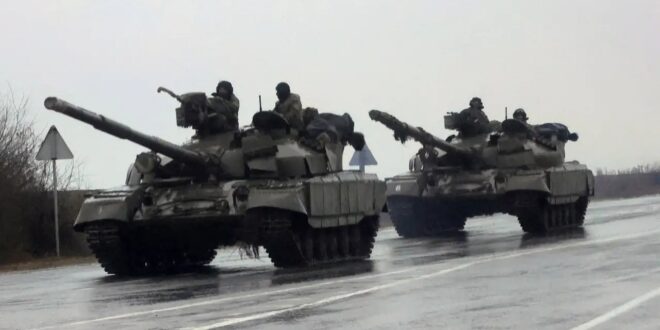 Russian troops launched their anticipated attack on Ukraine on Thursday, as President Vladimir Putin cast aside international condemnation and sanctions and warned other countries that any attempt to interfere would lead to “consequences you have never seen.”

Russian forces fired missiles at several Ukrainian cities and landed troops on its south coast, officials and media said, after President Putin authorized what he called a special military operation in the east.

Shortly after Putin spoke in a televised address on Russian state TV, explosions could be heard in the pre-dawn quiet of the Ukrainian capital of Kyiv. Gunfire rattled near the capital’s main airport, the Interfax news agency said.

Ukrainian President Volodymyr Zelenskyy on Thursday called on all citizens who were ready to defend the country from Russian forces to come forward, saying Kyiv would issue weapons to everyone who wants them.

Russia launched an all-out invasion of Ukraine by land, air and sea on Thursday, the biggest attack by one state against another in Europe since World War Two and confirmation of the worst fears of the West.

Zelenskyy urged Russians to come out and protest against the war.

Adviser to Ukraine President Office says more than 40 Ukrainian soldiers were killed and several dozens injured so far in the Russian invasion.

The adviser also said there are civilian casualties, but did not specify how many.

Israeli President Isaac Herzog on Thursday called on Israelis citizens in Ukraine to leave the country as a Russian invasion was underway.

After his arrival in Greece on an official visit, Herzog also addressed concerns over the Jewish community in Ukraine. “We are of course concerned for the fate of the Jewish community in Ukraine, and we shall offer every possible humanitarian cooperation to the Government of Ukraine in partnership with and together with other partners,” a statement from the president’s office said.

Siren going off in the Polish town of Medyka, on the border with Ukraine.

Medyka is one of the border checkpoints from which people in Ukraine can leave the country.

After weeks of denying plans to attack neighboring Ukraine, Russian forces fired missiles at several cities in Ukraine and landed troops on its coast on Thursday.

Ukraine military says about 50 Russians have been killed and six planes destroyed in Eastern Ukraine.

One person killed from shelling in Uman

Ukraine Defense Minister says anyone who is ready and able to hold a weapon can join the ranks of the territorial defense forces.

President Maia Sandu on Thursday said Moldova would introduce a state of emergency and was ready to accept tens of thousands of people coming in from neighboring Ukraine.

“We will help people who need our help and support,” she said.

Dozens of cars were queuing on the border between Ukraine and Moldova, according to Moldovan media websites.