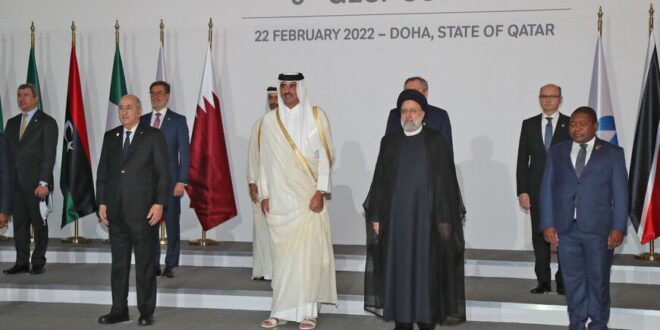 Iran’s president declared that US sanctions have failed to put a brake on his country’s lucrative natural gas production.

Iran’s President Ebrahim Raisi said his country is ready to serve as a regional safe route for natural gas and connect key producers to consumer markets.

Iran possesses one of the world’s largest gas reserves, second only to Russia. The country’s proven gas resources, according to its Oil Ministry data, stand at over 1.2 trillion cubic feet, nearly 18% of the world’s total. Iran’s energy sector, however, has for decades faced direct or indirect Western sanctions over Tehran’s nuclear and missile programs as well as its regional policies.

“Despite America’s oppressive, unilateral and illegal sanctions, the Islamic Republic has managed to ramp up its natural gas production thanks to the expertise and commitment of its workforce and the domestically developed technologies,” the Iranian president said.

Earlier in his two-day visit to the Persian Gulf sheikhdom, the Iranian president met with Emir Sheikh Tamim bin Hamad Al-Thani and Prime Minister Khalid bin Khalifa bin Abdulaziz Al-Thani, as Iranian delegations inked 14 memoranda of understanding with Qatari counterparts in a wide range of areas from trade, transit and energy to sports, culture and tourism.

The visit coincided with a frenzy of diplomacy in Vienna, where Iran and the West are seeking to revive the 2015 nuclear deal. Even as positive signals have been sent by almost all the parties engaged, uncertainty surrounds the prospects of a potential agreement, as the United States and the Islamic Republic still remain divided over some details.

Against this backdrop, the Raisi visit has fed speculation that Doha could be playing mediator, trying to narrow the gaps between Tehran and Washington.

During a joint presser with Raisi on Monday, the Qatari emir declared that he had squeezed the Vienna nuclear talks into his discussions with the Iranian president and had expressed his country’s preparedness to help facilitate a deal.

Yet the Iranian government stayed diplomatically reserved and refused to clarify whether Doha was indeed playing go-between.

Raisi’s “Qatar visit has nothing whatsoever to do with the negotiations in Vienna, which are continuing their own path,” government spokesperson Ali Bahadori Jahromi told reporters at a weekly briefing in Tehran Feb. 22.