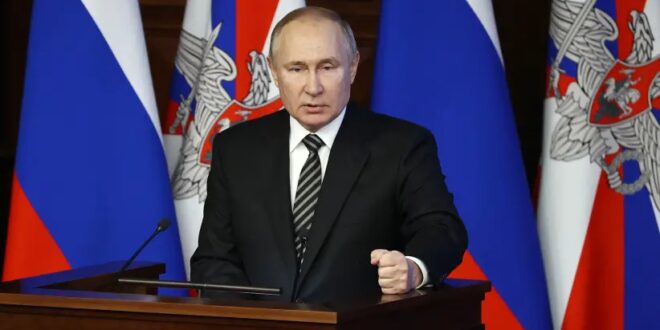 Russian President Vladimir Putin has generally prided himself on making calculated decisions that increase Russia’s power and standing over the last decades.

Whether it was convincing the US in 2009 that bad US-Russia relations were the fault of the Bush administration and getting the White House to agree to a “reset,” or picking fighting with Georgia and sending support to the Assad regime; Putin always seemed to come away looking like a master strategist. He seemed to outplay the West at every opportunity; getting NATO-member Turkey to buy S-400s, and getting increasing support among the far-right and far-left in Europe, selling weapons across the Middle East and working with countries that had been partners of the US, such as Pakistan.

Now Putin may have miscalculated the repercussions of the attack on Ukraine. If he believed that this would be like the attack on Georgia in 2008 and that the West would quickly come groveling back, he may now find that even countries that appeared sympathetic to Moscow are having second thoughts.

The attack on Ukraine has caused concern in Sweden and Finland and the belief that it might be time for them to become closer to NATO. In addition, reports say Cyprus and Hungary could be on board to not block a ban on Russia from the SWIFT global payments network. That means that many key countries Russia likely counted on are moving to take tough measures against Moscow, or at least not stand in the way of other European countries being tough.

In addition reports that Germany will allow RPGs to be sent to Ukraine and Netherlands will send Stinger missiles to Ukraine, as Poland backs Ukraine joining the EU. One by one a number of states are falling into line to actually do something for Ukraine that might help the country resist the invasion.

Putin will be content to know that outside the West his invasion is not meeting harsh criticism. In places like Pakistan, the Gulf states, India, Malaysia and China, there is less concern or willingness to slam Russia. But Moscow needs the West divided. It needs the West to be addicted to its energy exports. Moscow has spent years trying to foster these divisions in the West. It has used state media and it has sought to spread its talking points to both the far-right and the far-left. This bizarre ideological acrobatics is accomplished by feeding the far-left stories about how Russia is “fighting fascism” in Ukraine and how Russia is “anti-imperialist.” Meanwhile when Russia tries to feed the far-right its narrative it talks up being nationalist and Christian, it shows off not being “woke” or into LGBT rights; it peddles a kind of subconscious white nationalism and encourages anti-migrant narratives and also isolationism in the West.

In this narrative battle Moscow has become expert at getting the far-left to show sympathy for its cause, while getting the far-right to also be “worried” about how any Western support might lead to conflict. It feeds the “be wary of a new Cold War” logic to the West, even as it invades Ukraine. It also spreads the narrative about how the US wouldn’t want “Mexico joining a Russian-backed alliance” or similar stories that are supposed to convince westerners that Russia invading Ukraine has some pretense of acceptability.

But playing off far-right and far-left ideologies in the West may not have worked this time. Very few people are buying the argument that Russia’s war on Ukraine is an “anti-Nazi” war and most are not buying the argument that only western “globalist” elites care about Ukraine, while the average person is supposed to not care and instead side with Russia, or side with “it’s not our interests.”

Russia’s bizarre ability under its current leadership to sell narratives to the far-left and far-right in the West may have been a miscalculation this time. People seeing Ukraine being bombed and a humble Ukrainian leader in Volodymyr Zelensky, a man in the streets with a smart phone while Russia is threatening Kyiv, may not be convinced of Russia’s narrative. They see Ukraine being pounded and wonder how Russia could ever believe Ukraine was a “threat” to Russia.

In these examples Moscow may have miscalculated. It likely believed there would be support for Russia’s troops entering Ukraine. It used airborne assaults deep behind the lines, apparently believing they would be uncontested and that armored columns would be greeted with flowers. This is because Russia’s calculations were based on the fact that there are many Russian speakers and there were pro-Russian political forces in Ukraine before 2014. But those people may not appreciate being bombed, even if the bombing has been mostly precision strikes so far. So far it is not clear, but there haven’t been images of Russian troops greeted with cheers. Putin in his speech accused the current Ukrainian leadership of having launched a coup in 2014 and portrayed them as illegitimate and carrying out attacks on Russian speakers.

There is no doubt that the perceptions of Russia on social media are not the real world of how Russia is perceived in many countries such as China. Moscow may think that the countries that matter don’t really care about Ukraine, whereas the West is mostly willing to talk and virtue signal and not do anything. The West will have to show that it can and will do something to back Ukraine if it is to make good on claims that Russia’s offensive had slowed and that Russia may have miscalculated.