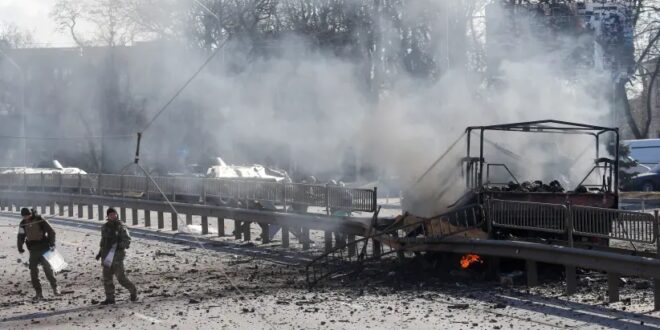 Ukrainian army posts directives on how to sabotage the Russian advance

“Let the enemy regret that he came to our land, and as a result fell into hell,” the post read.

The Western Operational Command of the Ukrainian Ground Forces posted on Facebook a series of directives on how to sabotage the advance of Russian troops.

“Your simple actions have a great difference in the fight against the enemy,” the post began.

It then directed readers to “focus on the main task, namely to destroy/remove the enemy’s control system and its rear operation.”

It then listed a number of practical methods to do so:

“Dismantle or carefully draw road signs and names of settlements to confuse the enemy; create forest blockages to make it impossible for the enemy to push through; be creative, use other engineering structures and tricks; actively use homemade lighters; destroy key transport infrastructure; increase activity at night and dusk.”

“Let the enemy regret that he came to our land, and as a result fell into hell,” the post concluded.

Ukrainian authorities have been instructing their citizens on how to resist the Russian invasion since it began.

Kyiv authorities on Friday told residents of the north-western Obolon area to stay off the streets given “active hostilities” were approaching and to prepare Molotov cocktails. Ukrainian TV also gave instructions for how to make the makeshift explosives.

A Lviv-based Pravda brewery even switched to making Molotov cocktails since the invasion began, according to a Ukrainian media report.