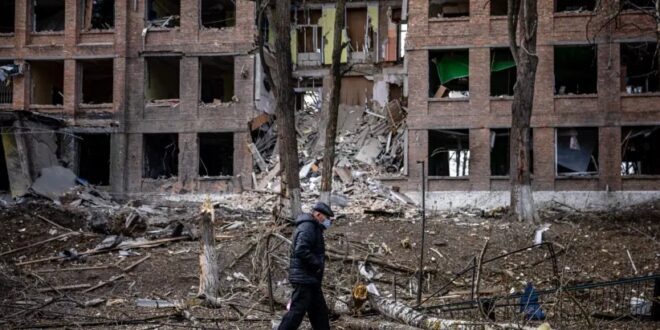 “As you can see, not only do Western countries take unfriendly measures against our country in the economic dimension – I mean the illegal sanctions that everyone knows about very well – but also the top officials of leading NATO countries allow themselves to make aggressive statements with regards to our country,” Putin said on state television.

Responding to Putin’s order, Ukraine Foreign Minister Dmytro Kuleba commented that it would be a disaster for the world, but would not be enough to break Ukraine.

“If Putin’s order to ready nuclear forces is a direct threat to use nuclear weapons against Ukraine, then I have a very simple message,” Kuleba said, according to the news outlet New Voice of Ukraine. “It will be a disaster for the world, but it will not break us.”

US Ambassador to the United Nations Linda Thomas-Greenfield slammed Putin’s move as an unacceptable escalation.

“It means that President Putin is continuing to escalate this war in a manner that is totally unacceptable and we have to continue to stem his actions in the strongest possible way,” she said in an interview with CBS Face the Nation.

“We’ve seen him do this time and time again. At no point has Russia been under threat from NATO, has Russia been under threat from Ukraine. This is all a pattern from President Putin and we’re going to stand up to it. We have the ability to defend ourselves, but we also need to call out what we’re seeing here from President Putin,” Psaki said on ABC’s This Week program.

“We have not taken those off, but we also want to do that and make sure we’re minimizing the impact on the global marketplace and do it in a united way,” Psaki said.

A senior US defense official called Putin’s order to put Russian nuclear forces on high alert escalatory and said it could make things “much, much more dangerous.”

“It’s clearly, essentially, putting in play forces that, if there’s a miscalculation, could make things much, much more dangerous,” the official said, speaking on condition of anonymity.

Fighting between Russian and Ukrainian forces entered its fourth day on Sunday as Russian forces continued to push into the Ukrainian capital of Kyiv and the city of Kharkiv in the northeast.

Missiles were launched from Belarusian territory into Ukraine, with one target being the Zhytomyr Airport, according to a reporter from the Kyiv Independent.

Video of what seems to be the airport after the strike was later shared on social media.

Russian forces advanced over the weekend towards Ukraine’s major cities, but on Sunday morning the Ukrainian Armed Forces claimed that the Russian military movement had slowed due to the need to replenish fuel and ammunition.

The Ukrainian military also claimed that enemy troops, mostly young conscripts, are exhausted from the previous military exercises they had participated in just prior to the invasion. They claim that there is desertion and low morale, but this assessment may itself be psychological warfare.

“The main goal of the opponent is to block the capital of our homeland, the city of Kiev, which remains unfulfilled,” said the Ukrainian military.

“Where are all those who promised to capture Kyiv in 72 hours? Where are they?” Ukrainian Defense Minister Oleksii Reznikov said in a Sunday morning statement.

The Battle of Kyiv

A series of blasts were heard to the west of the Ukrainian capital Kyiv’s center on Sunday, minutes after air raid sirens sounded, a Reuters correspondent reported.

Ukrainian media reported explosions and a gunfight in a nearby town.

According to the Ukrainian news website Segodnya.ua, a bridge has been blown up near the town of Bucha west of Kyiv. It was unclear whether it had been bombed by Russian troops or destroyed by the Ukrainian side.

Anton Herashchenko, an adviser to Ukraine’s interior minister, said fighting was underway in Bucha with Russian forces that were trying to advance towards Kyiv.

Gunfire and the sound of explosions echoed through Kyiv on Saturday night as well.

Kyiv’s Mayor Vitali Klitschko said on Saturday that there was no major Russian military presence in the capital, but that saboteur groups were active and he was imposing a curfew from Saturday evening until Monday morning. Klitschko, a former world heavyweight boxing champion, later told Germany’s Bild tabloid the city was “nearly encircled.”

Chechen leader Ramzan Kadyrov, a close Putin ally, said on Saturday his fighters were also deployed in Ukraine. He said Russian forces could easily take Kyiv and other large cities but their task was to avoid loss of life.

However, Defense Minister Oleksii Reznikov was defiant on Sunday morning, extolling Ukrainian success in repelling Russian advances in the city.

Instead of seeing Russian forces in the capital, Reznikov said that all he saw was a “heroic army, a civil guard, fearless border guards, selfless rescuers, reliable police officers, tireless medical rescuers who all do their duty.”

Authorities have handed thousands of assault rifles to residents and told citizens to make petrol bombs to help repel the invaders. The government press has also issued instructions on how to sabotage the Russian advance through non-military means.

“I see thousands and thousands of citizens who have taken arms, and have become a level of territorial defense,” Reznikov said Sunday.

Russian troop vehicles were seen on the streets of Ukraine’s northeastern city of Kharkiv on Sunday, Anton Herashchenko, an adviser to Ukraine’s interior minister, wrote on Telegram.

“We know that (Russian forces) have not made the progress that they wanted to make, particularly in the north. They have been frustrated by what they have seen is a very determined resistance,” a US official said, without providing evidence.

Putin on Sunday thanked Russia’s special forces, singling out those who are “heroically fulfilling their military duty” in Ukraine, in a televised address that was also published on the Kremlin website.

Ukraine was able to mobilize 100,000 soldiers in just two days, with 50,000 being Territorial Defense volunteers and the other 50,000 being reservists, according to the Kyiv Independent.
Russia and Ukraine casualties and refugees

Ukraine’s health ministry said on Sunday that 352 civilians, including 14 children, had been killed since the beginning of Russia’s invasion of Ukraine.

Interfax later cited the regional administration in Donetsk, eastern Ukraine, saying 17 civilians had been killed and 73 wounded by Russian shelling.

Zelensky said on Sunday that Russian actions verged on “genocide.”

“This is terror. They are going to bomb our Ukrainian cities even more, they are going to kill our children even more subtly. This is the evil that has come to our land and must be destroyed,” Zelensky said on a short video message.

Russia has not released casualty figures and it was impossible to verify tolls or the precise picture on the ground. Both Ukrainian and Russia casualties are suspect of inflation and downplaying by both sides, for morale and propaganda purposes.

About 100,000 people have crossed into Poland from Ukraine since Thursday, including 9,000 who have entered since 7 a.m. on Saturday, Polish Deputy Interior Minister Pawel Szefernaker said.

Romania announced on Sunday that in cooperation with Ukrainian border authorities, Romanian ambulances will pick up children, pregnant women and the elderly waiting in long queues to cross the border into Romania at the northeastern Siret crossing, speeding up the process.

The United Nations High Commissioner for Refugees (UNHCR) said on Sunday that some 368,000 Ukrainian citizens fled the country in the past week.

At least 300,000 Ukrainian refugees have entered EU territory so far, and the bloc needs to prepare for even larger numbers of arrivals, EU Home Affairs Commissioner Ylva Johansson said on Sunday.

“I am proud of how the European citizens at the borders are showing concrete solidarity with Ukrainians fleeing this terrible, aggressive war,” she told reporters on her arrival for a special meeting of EU interior ministers in Brussels to discuss the fallout of the war in Ukraine.

She said she would announce a solidarity platform at the meeting to support the Ukrainians fleeing their country and the EU countries most affected by refugees arrivals at the moment.

Humanitarian and military aid to Ukraine

“The world has seen – Ukrainians are strong, Ukrainians are powerful, Ukrainians are brave. So it is not surprising that such people always have more powerful friends than enemies,” Ukrainian President Volodymyr Zelensky said in an address on Saturday night. “During the day, I spoke every hour with the leaders of Ukraine’s friends.”

Zelensky said that he had spoken with the leaders of Italy, India, Azerbaijan and others about how they could aid Ukraine.

NATO countries have been “boosting their support for our partner Ukraine.” NATO said Saturday night.

“We keep our word on defense,” The Czech Defense Ministry said on Sunday morning, sharing a video of a train presumably full of military supplies and headed for Ukraine. “We’re sending machine guns, assault rifles, pistols, ammunition and artillery shells. Further assistance will be approved by the Sunday government.”

Romania said on Sunday that it will send provisions and equipment worth 3 million euros ($3.38 million) to Ukraine and has offered to care for the wounded in military and civilian hospitals, government spokesperson Dan Carbunaru said on Sunday.

Ukraine is also receiving financial support from individuals around the world, even as crowdfunding site Patreon closed a campaign raising funds for Ukrainian soldiers and gear over the weekend. The General Staff of the Ukrainian Armed Forces thanked supporters on Sunday morning, saying that they had received 1.160 billion Ukrainian hryvnias, or $39 million, from supporters, which included 900,000 transactions from personal sources.

Israel’s Prime Minister Naftali Bennett said on Sunday that Israel plans to send 100 tons of medical aid and other equipment to help Ukrainian civilians under attack.

One of the biggest results in Zelensky’s eyes was the limited disconnection of SWIFT from some Russian institutions. They have so far stopped short of forcing Russia out of the SWIFT system for international bank payments, though Germany’s foreign and economic ministers and French presidential official indicated on Saturday that such a move may come soon.

“Our diplomats fought around the clock and with inspiration for all European countries to agree on a strong and fair decision to disconnect Russia from the international interbank network. We also have this victory. This is billions and billions of losses for Russia – a concrete price for this vile invasion of our state,” Zelensky said on Saturday night.

Earlier, Canada, Spain and Portugal on Sunday announced that their airspaces are closed to Russian planes and airline operators.

A string of European countries including Britain, Germany and Italy have already taken the same measure in response to the invasion of Ukraine.

Air France AIRF.PA has also decided to stop all operations from and to Russia, the company said on Sunday.

“In light of the situation in the region, Air France has decided to suspend flights to and from Russia as well as the overflight of Russian airspace until further notice as from 27 February,” its statement said.

The decision will also lead to flights to and from countries such as China and Japan being called off while Air France is studying alternative routes, the statement added.

Turkish Foreign Minister Mevlut Cavusoglu said on Sunday it was implementing an international pact on naval passage to the Black Sea.

Under the 1936 Montreux Convention, Turkey has control over the Dardanelles and Bosphorus straits that connect the Mediterranean and Black seas and can limit the passage of warships during wartime or if threatened.

Cavusoglu made the comment in a live interview with broadcaster CNN Turk. Turkey earlier called Russia’s invasion of Ukraine a “war” on Sunday in a rhetorical shift that opened the way for the move.

Von der Leyen said that sanctions would be applied to Belarusians helping the Russian war effort. The EU will also extend on Belarus the same export restrictions on dual-use goods for Russia.