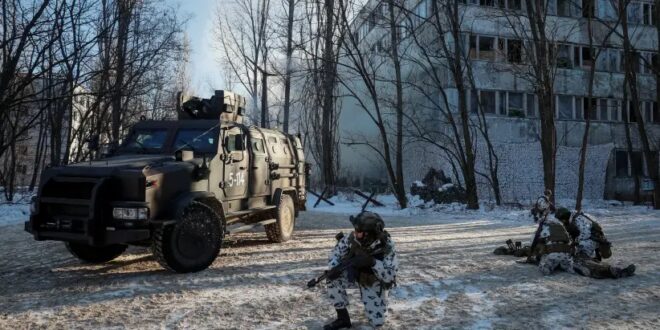 The State Nuclear Regulatory Inspectorate of Ukraine (SNRIU) said early on Sunday morning that the site was hit, but due to ongoing fighting could not assess the damage.

“The automated radiation monitoring system failed,” said the SNRIU statement on Facebook. “But the surveillance cameras recorded the falling missiles.”

The nuclear waste site was hit at around 1:20 Kyiv time, and due to ongoing fighting, the SNRIU is unable to assess the extent on the destruction. The organization said that it will have to conduct assessments in the field with portable devices once there is a lull in combat.

The SNRIU noted that according to preliminary assessments, there is currently no threat from the radioactive waste impacting areas outside the site.

This is not the first nuclear scare during the Russia-Ukraine War.

Ukraine said on Friday it had recorded increased radiation levels from the defunct Chernobyl nuclear power plant, a day after the site was captured by Russian forces, due to military activity causing radioactive dust to rise into the air.

The former power plant was captured by Russian forces on Thursday, an adviser to the Ukrainian presidential office said at the time.

Experts at the agency did not provide exact radiation levels but said the change was due to the movement of heavy military equipment in the area lifting radioactive dust into the air.

Russia had captured the area earlier and had said the levels were normal and had sent paratroopers to guard the plant.

“Radiation starts to increase. It is not critical for Kyiv for the time being, but we are monitoring,” the interior ministry said.

The still-radioactive site of the 1986 nuclear disaster lies some 100 kilometers from Kyiv.

The Chernobyl nuclear reactor is the site of the worst nuclear disasters in history.